Controversies! The only constant in Indian hockey

The Indian hockey team was the first non-European team to be a part of the International Hockey Federation. In 1928, the team won its first Olympic gold medal and until 1960, the Indian men's team remained unbeaten in the Olympics, winning six gold medals in a row. The team had a 30–0 winning streak during this time, from their first game until losing in the 1960 gold medal final. India also won the 1975 World Cup. India's hockey team is the most successful team ever in the Olympics, However, despite all the successes, the team has always been caught in the quagmires of controversies, since the beginning of their journeys. Here we look at the controversies that rocked the Indian hockey teams from their first Olympic appearance in 1928, to their last in 2016.

Captain walks out in maiden Olympics - 1928

India's Olympic debut was marred by controversy over the captaincy. Jaipal Singh, who was studying in Oxford, was selected along with two other England-based Indians, Yusuf Khan and the Nawab of Pataudi (Sr), who played only in the warm-up games but not the Olympics. Jaipal was named captain much to the dismay of the Anglo-Indian players in the squad. The simmering discontent saw a disgusted Jaipal walk out of the team after it reached the quarter-finals and Eric Pinninger took over the leadership.

At the 1932 Los Angeles Olympics, India’s second goalkeeper Arthur Hind refused to don the turban just before the march-past during the opening ceremony – he was asked to return home but was later allowed to stay back after he tendered an apology.

Balbir Singh scored six goals in India’s 8-1 rout of Argentina at the 1948 London Olympics but was axed for the next two games against Spain and the Netherlands. There was a clamour for Balbir’s return to the side and he vindicated the move scoring a brace, in India’s superb 4-0 final triumph over hosts Great Britain.

The team selection ahead of the 1952 Games was marred by such controversy that India looked destined to return home from Finland empty handed. There was a near-riotous situation concerning the inclusion and omission of players to an extent that the critics wrote off the team, led by Kunwar Digvijay Singh ‘Babu’, as a bunch of no-hopers despite India having won four gold medals at consecutive Olympics. Having dominated the world since 1928, the Indian hockey team fell short of another Olympic gold, losing to arch-rivals Pakistan in the final at the Rome Games.

India entered the 1968 Olympics with the team in a state of disarray. Gurbux Singh had captained India in most of the tournaments between 1964 and 1968. Yet, the federation named Prithipal Singh as the skipper. That came as a big shock to Gurbux, who made his disappointment public, and the federation finally named them both as captains. For the first time in Olympics history, India had failed to make the final.

Barely a year after winning the World Cup in the hot and steamy Kuala Lumpur, Indian hockey slid to its nadir amidst considerable controversy and acrimony among players as the high profile team finished a shocking seventh. The unheralded New Zealand won the gold on the spanking new synthetic pitch that made its international debut. With few players having even seen an artificial surface much less played on it, the Indian team, under World Cup captain Ajit Pal Singh, playing in his third Olympics, set off for Canada via Europe where they played a few warm-up games. It was a journey that was marred by in-fighting regarding the division of money accrued through sale of hockey sticks. Indiscipline that bordered on open rebellion affected India's performance that can be best described as up and down on a surface the players were unfamiliar with. 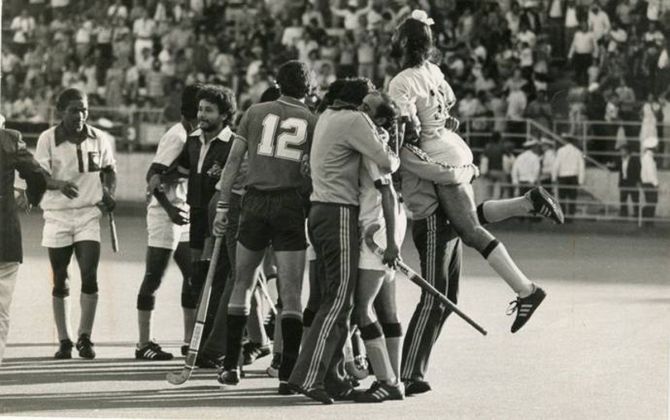 India fielded a relatively young but talented side for the Moscow Games where barring skipper Vasudevan Baskaran and goalkeeper Bir Bahadur Chhetri, the rest made their debut. The Games, though, were marred by a US-led boycott over the Russian presence in Afghanistan. As such, men's hockey had just six teams with the medallists of the previous Games - New Zealand, Australia and Pakistan, besides European powerhouses West Germany and Holland - remaining absent. Thus, a gold medal for India was a foregone conclusion.

Reckoned to be one of the best teams ever in the post-Independence era, the Indian squad for the 1984 Olympics glowed with talent and promise to an extent that nothing less than a medal was expected of it. The side, led by left-winger Zafar Iqbal, nearly lived up to the expectations, but missed the semi-final berth by a whisker, and with it a medal. The uniqueness of the team lay not so much in the players or the collective talent as in the concept of ‘total hockey’ that coach Balkrishen Singh introduced. The controversy erupted following the adoption of a new strategy that called for a four-man midfield instead of the traditional three half-backs was heavily criticised by the traditionalists who preferred the ‘Inverted Pyramid’ pattern that was synonymous with Asian hockey.

Row over captaincy between veterans and newcomers - 1988

In the 1985 Asia Cup final, half a dozen players were banned for allegedly manhandling the umpire while disputing a goal against them. So much so that at the 1986 World Cup in England, India touched rock bottom by finishing 12th and last as they struggled to find suitable replacements for the banned players despite the emergence of Pargat Singh as one of the world’s best full-backs and of master dribbler Mohammed Shahid who enjoyed an iconic status. By time Seoul Olympics came around, Indian hockey had barely recovered from the body blows it had received in 1985. Coach M.P. Ganesh had a tough time in picking the 16 as he had to weigh sentiments against form. Eventually, under pressure, he included veterans Shahid, M.M.Somaya and Mervyn Fernandis in the squad though their utility was open to question. There was also an issue over captaincy that went to Pargat Singh ahead of the veterans and much against the tradition of the senior-most player being made the skipper.

The Indian team was in such a disarray that it was forced to qualify for the Barcelona Games and almost did not make the grade. A dejected coach Balkrishen, reduced to tears, was ready to resign. Finally, it was Malaysia’s largesse that eventually helped India qualify and the echoes of the late-night, behind-the-scenes moves were to be heard five years hence when the two teams played out a goalless draw which was a pre-determined result. Having qualified for Barcelona by the skin of their teeth, it was thought that the team would bounce back and be a serious medal contender. However, the Olympics campaign turned out to be a disaster with indiscipline in the ranks. Balkrishan, a kind soul that he was, could not control the erring players who indulged in late-night ventures. 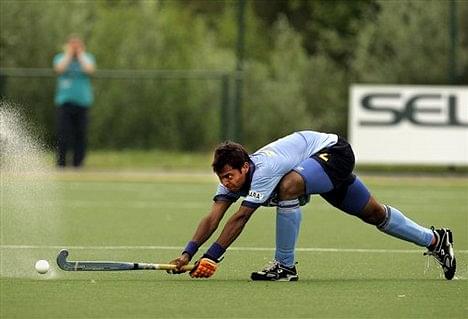 Dilip Tirkey at the 1996 Olympics

Indian Hockey Federation (IHF), got involved in a match-fixing controversy that split the team ahead of the 1996 Atlanta Olympics. En route, India and Malaysia deliberately played a goalless draw that knocked out Canada while Malaysia qualified. Some of the seniors in the Indian team were very much in the know while the coach and a majority of other players learnt of the diabolical plan too late in the game. The International Hockey Federation (FIH) investigated, but could not substantiate the match fixing charges though for those who witnessed the match, it was quite obvious.

After the poor finish at the 1996 Atlanta Games, there was another shuffle in the coaching department with Vasudevan Baskaran coming in for Cedric D’Souza who had been in the post earlier. There was so much secrecy about team selection that few could fathom the motives of the Indian Hockey Federation that selected the team after two rounds of trials held in Australia. The only major change though was the ejection of triple Olympian and skipper Pargat Singh Powar, notwithstanding a few surprise inclusions.

2004 Olympics riddled with factional fights and controversy over the appointment of German Gerhard Rach as the coach, superseding Rajinder Singh, just before the Athens Games. Rach, hitherto unknown in hockey circles and with a police record, was the Indian Hockey Federation’s surprise choice as was the selection of veteran Dhanraj Pillay, who was originally not included in the list of probables.

Scandal and failure to qualify - 2008

Between national men team's failure to qualify for Olympics for the first time in 80 years to the infamous cash-for-selection scandal, the year gone by witnessed Indian hockey's transition from bad to worse. India's failure in the international circuit, controversies and administrative goof-ups dominated the year 2008 which has very little to show except a few stellar performances by the junior men. However, the incident which shattered every Indian's heart was the eight-time Olympic champions' failure to qualify for Beijing Games after losing to Britain in the final of a qualifying event in Santiago, Chile.

Dispelling the notion that the Indian Hockey team refused to attend the opening ceremony of the Rio Olympics as a sign of protest against inappropriate and shabby kits, Union Sports Minister Vijay Goel asserted that the team avoided the ceremony as they had a match the next day and wanted to rest. Goel stated that the matter was definitely not a controversy but simply a small issue. Talking about the controversy where contingents have reported of inadequate facilities and furniture at the Olympic Village, Goel added that the Indian embassy in Brazil has been handed a hefty budget to ensure that the Indian team is well taken care of.