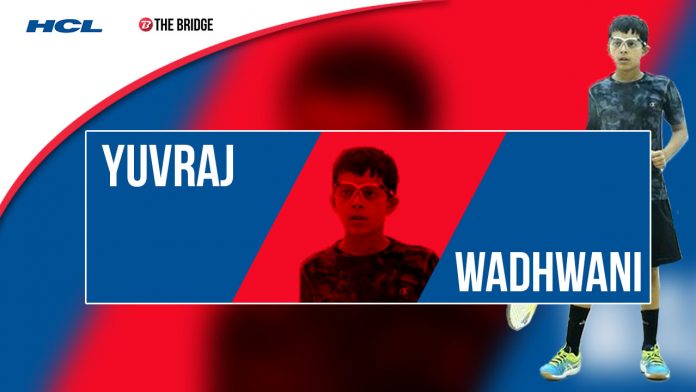 Just a few months shy of entering his teenage, the little Yuvraj Wadhwani has been busy chalking out career plans for the year ahead. The recently crowned Champion of the Asian Junior Squash Championships that took place in Chennai, Yuvraj has shot up to cloud nine. In a tight clash against Pakistan’s Anas Ali Shah, Yuvraj prevailed over him in 13-11, 11-5, 6-11, 12-10 displaying his expertise with the sport in the U-13 category. The Bridge got the opportunity to have a conversation with the excited Yuvraj and his equally elated mother, Rohini Wadhwani.

Being a staunch antagonist to the adage, “All work and no play makes Jack a dull boy,” Yuvraj’s mother made it clear that his genes were encrypted with those of an athlete.  The Mumbai based family nurtured a long love affair with sports and Yuvraj has inherited that love completely.  “My husband plays squash at the club…but, not at the competitive level. From my family side, most of them were swimmers. Yuvraj actually started as a swimmer initially, and then he went into squash later,” explained Rohini as she traced his transition story into Squash.

Yuvraj, who was excellent as a swimmer and specialised in the problematic butterfly stroke had also been the Number 1 in the Mumbai District for quite some time. Exploring his talent in the water from four and a half years when he was admitted in swimming classes, Yuvraj displayed signs of a keen athlete. Often he’d tag along to the club and watch his father play squash, and the adrenaline pumping nature of the game would also inspire him to take it up.

Back when Yuvraj was in junior school, it became easy to have the best of both worlds as he could do both swimming and squash. But once middle school barged in, and the timings extended, he was forced to choose between the two and without a flinching doubt in his seven and a half-year-old mind decided to stick to squash.

Asked if it was a tough decision choosing between the two, Yuvraj seemed confident of his decision, “It was my dad. I used to watch him play squash at the club. It was more fun than swimming because there it was just laps up and down. I was Mumbai District Number 1, and I had broken a few records in the butterfly stroke..but in squash, there is running around, it’s more active and fun,” said the restless 12 year old from Maharashtra.

The Asian Juniors this year isn’t all that young Yuvraj won. Since 2016, HCL has been the title organiser of the silver-category event (in the Asian Squash calendar), the HCL International Junior Squash Championship. The official brief of the tournament also boasts of it being a five star graded tournament in the SRFI Calendar of events as well. Recently, the third edition of this tournament was organised at Shiv Nadar University in Greater Noida. It is worth noting that the two previous versions of the tournament had seen Yuvraj win Gold there as well.

After a silver medal finish at the Asians last year, the young Yuvraj had his mind settled and fixed on the gold. “One of his goals has always been to win gold for the country. So when last year he won the silver since then he has been wanting to win gold. I don’t think he realized the magnitude of the thing till it happened. Now with all the wishes coming in he realises how big a deal it was,” expressed Rohini, breaking into a laugh at the thought of her little son is already going places, winning international medals from all over the world.

On winning the U-13 title, Yuvraj became the second Indian to repeat this feat after Veer Chotrani did it for the first time in Iran, 2014!

The ardent cricket fan, Yuvraj also likes to while away his time strumming on the guitar or playing chess or football. Not only that, he has taken a genuine liking for computer science and finds it very interesting.

The Ramy Ashour and Gregory Gaultier fan who Yuvraj considers as his ‘squash gurus’ always had his eyes trained on the gold.  “A gold for India was his priority in Juniors. He worked hard this year. Because he wanted the gold. The British Juniors in January is his next goal,” said Yuvraj’s mother already marvelling at her son’s busy schedule.

Other than the full support of his family, Yuvraj has been blessed with a good school.
“His school has been extremely cooperative. When it comes to his leaves, there has been no pressure from the school and in performance. It’s a different thing that he wants to do well in studies and hats off to the school for being so cooperative with him travelling around for tournaments. Had the school not allowed it, it would have been tough for him. That has worked in his advantage,” confessed his mother gratefully.

To see schools stepping in to facilitate the growth of such budding athletes is indeed a sight for the sore eyes and the Wadhwani family feel lucky to have them by their side, supporting Yuvraj.

The feat of having won an international medal has still not sunk in and Yuvraj is still lost in wonder, “It feels amazing. I was not believing…but after it happened it was an amazing experience. I am aiming at the Nationals which is coming up end October, and there is the British Junior Open which is coming in January which is a big tournament,” said the soon-to-be-a-teenager boy.

There has been a lot of fresh talent coming up in India with teenagers taking over the world by achieving mind-boggling things for their age. Yuvraj, with his impeccable athletic getup and a brilliant grip on the racquet, is a force to watch out for shortly. It can be safely said that the future of squash in India has found one of its able successors.