Chetan Baboor: A versatile player on and off the arena Growing up in a middle-class household in India, pursuing a sport professionally could be hectic. Apart from the stringent tournament schedules, practice and physical training, an athlete has to pursue his/her studies with equal dedication. The difficulty only grows moving on to the higher classes, with twice a day of practice sessions, school, tuitions and the added homework.

Struggling with a similar situation, I was on the verge of a meltdown and discussed my problems with my coach. This is when he told me the story of a legendary Indian paddler, Chetan Baboor. He showed that if you are really determined and focused, you can continue to be a successful player along with an excellent academic track record.

In today’s date, we have already seen how the players from south India — Sharath Kamal, Reeth Rishya or Sathiyan Gnanasekaran have pursued their excellence in table tennis, alongside strong academics. However, this trend was set way back by Baboor. The versatile Indian paddler, Chetan Baboor, was born on 22nd April in 1974. Born in Lucknow, Chetan has represented Karnataka, Tamil Nadu and later Petroleum Sports Promotion Board (PSPB) teams in India and BTK in Sweden. At just 16, he became a member of the senior national table tennis contingent. 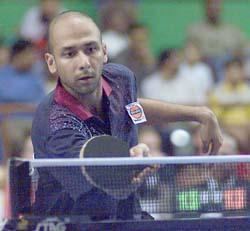 The paddler has four men’s national singles titles, two Commonwealth gold for doubles and silvers in the Asia Cup and Commonwealth Championships under his belt. He was revered for his versatility as a player in both national and international circuits. His passion for the game helped him to achieve an utter perfection in his TT stances — amateurs are trained to emulate his serves, top-spins and backhand shots. In the 1990s, Baboor spent about six years with the Swedish club Kalmar. During these days, he also played alongside several legendary TT players like Jan Ove Waldner, which further perfected his game. 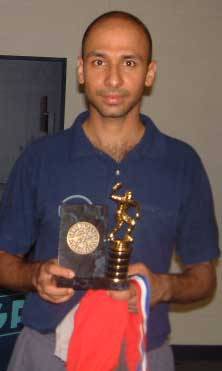 His achievements in academics were nothing less than what he achieved in sports. He has a Mechanical Engineering degree from Rashtreeya Vidyalaya College of Engineering and had an MBA from the Thunderbird School of Global Management. He was an employee with Indian Oil as a mechanical engineer but he had his own way of pursuing life so he stopped playing pro-tours in 2001, at the age of 27 to pursue an MBA from Thunderbird University and has been working in Business/Management consulting since.

The path he chose inspired many like us not to see sports as just a mere workplace quota and also to pursue the academics for the love of it, even if you have a proven successful career in sports. He also showed that a lot can be done for the good of sports even when you are not holding the bat. Winner of the Arjuna award in 1997, Baboor currently is a presenter for the Asian games working with the TV channel Ten Sports. He is also working at Axtria Inc as an Associate Principal.

India has produced many brilliant sportspersons over the years who have went on to achieve great things for the nation. But would they have...
Read more
Cricket

For years Kerala has been known as the powerhouse of Indian football. However, many still don't know about its tryst cricket, which had started...
Read more
Football

Things are rarely straightforward for East Bengal, are they? On Friday, the Kolkata football giants are back in action — they debut in the Indian...
Read more
Football

Diego Maradona, the Argentine soccer great who was among the best players ever passed away on Wednesday. Famed for the 'Hand of God' goal,...
Read more
Football

ISL 2020-21: Which teams dominated the statistics? Gameweek 1 — By the numbers

The first round of games in this season’s Indian Super League (ISL) is over and all of the matches have thrown up myriad topics...
Read more
Marathon

Top runners from across the world are expected to take part in the prestigious Airtel Delhi Half Marathon on Sunday, November 29, with organisers promising to...
Read more