Anjum Moudgil scripted history by becoming the first Indian female shooter to win a medal in 10m air rifle at the World Championships. She won silver while her compatriot Apurvi just missed out on a medal and finished on the fourth position. The icing on the cake was that she along with Apurvi Chandela has also earned India two crucial Olympic quotas for Tokyo 2020.

In what has been a pretty successful year for the shooting contingent as a whole, Anjum’s year began on a high. She grabbed silver in the first world cup of the year at Guadalajara; her first medal from an ISSF World Cup. A versatile shooter who represents India in both 10m air rifle and 50m rifle three positions, the silver came in her preferred event of 50m rifle 3 positions. She had shot an impressive 454.2 in the final falling just 1.2 behind Ruijiao Pei of China, who took the gold. Continuing her good form into the Commonwealth Games, she topped the qualification thereby setting a new games record en route to the final. The whole nation witnessed her composure and concentration in the finals where she won silver behind her another Indian veteran, Tejaswini Sawant.

At 24, Anjum Moudgil was already among the top rifle shooters in the country.

The World Cup at Changwon followed in April; her performances were not up to expectations. She had shot 1156 in the 50m rifle 3 positions to end up in 46th position. In her other event, she could manage a 625.5 to finish in the 20th position, failing to qualify for the finals.

Not one to be disheartened, she immediately fought back in the Munich World Cup, the following month. The 24-year-old put up an impressive score of 1177 in the qualifying section which is just 3 short of the world record in that event.

Also read: Shooting has had a lasting effect on my personality | By Anjum Moudgil

In 50m rifle 3 positions, there are 3 different phases; the shooter has to shoot in prone, kneeling and standing positions. It is considered to be one of the most challenging competitions among the current Olympic shooting events. At the finals in Munich, she was in the second spot after the kneeling and prone positions. However, a poor standing position score meant she could only finish sixth.

The shooting contingent had impressed many in the Asian Games; India stood at 3rd position in behind South Korea and China with two golds. However, Anjum Moudgil was one of the few shooters who had a disappointing outing in Jakarta. She had failed to qualify for the finals in her preferred event and was not a part of the squad in the 10m air rifle event; as each nation could only send two shooters for a single event.

Many were expecting a strong comeback from Anjum, and she delivered it within days.

But what has come as a pleasant surprise is her taking silver in the 10m air rifle event; as her performance in the other event had been better throughout the season.

Determined to put Asian Games behind she started off well at the qualification stage, even shooting 106.0 in her penultimate series. She ended up managing an impressive total of 628.7 to finish fourth at the end of qualification. This is the highest score that she had shot in international competition this year, and for it to come in the World Championships is even more impressive. Her compatriot Apurvi Chandela, one of the most consistent rifle shooters, also qualified for the finals. 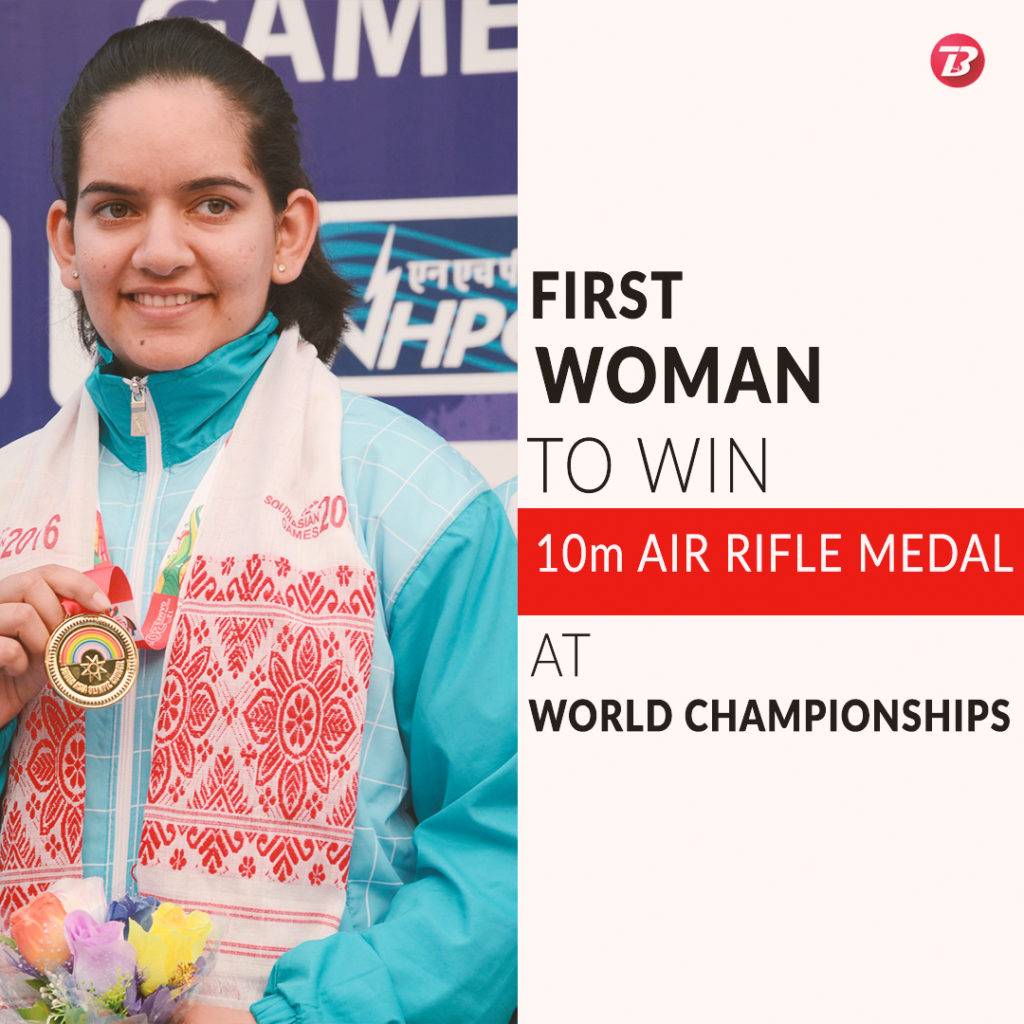 The finals saw a very competitive field of shooters; with current world number two Lin Ying-Shin of Chinese Taipei and previous winner of the event, Petra Zublasing of Italy in the fray. The Indian pair started off very well, even leading the competition at different stages during the finals.

At the end of the first ten shots, Apurvi occupied the first position with Anjum, the second. However, as the competition reached its final stages, the Korean pair of Im Hana and Jung Eunhea began to pose a challenge to the Indians.

Apurvi finished with a total of 207 in the finals missing out on a podium finish by a whisker. Anjum bravely fought off the challenge from Jung Eunhea to guarantee herself silver, however, 18-year-old home favourite Im Hana proved to be a barrier too high for Anjum.

Anjum finished the competition at 248.4, 2.7 behind the gold medal winning 18 years old.

Anjum still has an event to go, as she will look to follow up with another world-class performance in the 50m rifle 3 positions competition.