If the Asian junior squash championship is an index to the future in the sport in the country, then the Macau edition brought to the horizon a few bright stars for India, the brightest being Veer Chotrani, who emerged the champion in the U-19 boys’ category. Chotrani, incidentally, is the third Indian after Ravi Dixit and Velavan Senthilkumar earlier to win this coveted honours.

In Macau, he was the lone big success as far as medals go but what was also significant was that he had beaten his fellow countrymate, Yash Fadte for the cherished moment. Two Indians in the title round is an ample reflection of the strength that India had in this boys category. In terms of seedings, the two did not belong to the top two billings, but in skills deployment, the two produced the class to bring them right there to the top.

Fadte had the advantage of being the higher seed, compared to Chotrani but that did not matter to this Mumbai lad who in recent times had shown the hunger of a winner. Often in tournaments of past, Chotrani used to have this ungainly tendency of losing his way when the winning post neared. But lately, we have been seeing a new avatar of this hugely talented lad, son of a former national champion Manish Chotrani.

At the Southern Slam tournament, a newly introduced forum for Indian juniors, in May in Chennai, Chotrani had displayed his relentless resolve to be in the top, and sure enough, he emerged the winner despite not being the clear favourite. In Macau, too, he had delighted, beating higher seeded opponents en route before producing the same dose of supremacy against Fadte in the final.

A few others like Neel Joshi in the boys under -17 category and Yuvna Gupta in the girls U-15 section too could have added to the gold tally, but by reaching the final, both showed they had in them to be counted among the best. In all, one gold, three silver and as many bronze medals looked a reasonably satisfactory show from a bunch of Indians in the Asian sphere but more importantly, this was a performance that should inspire a bigger share of honours in the coming years.

As the newly elected Secretary General of the SRFI Mr Cyrus Poncha put it:

“Much of the gain seen now also has to do with the special efforts that the Federation had taken to hone the skills of the young participants. The two-week camp organised in the Shiv Nadar University in Greater Noida as part of the HCL’s podium programme under the expertise of the English coach Chris Ryder had a salutary effect.”

This, said Mr Poncha, was the beginning of many such ventures in the coming days to not just broad base squash in the country but prop up the sport to creditable ends. The fact that an IT major had gone ahead to associate with this sport in the country was an acceptance of a sport that was growing. HCL’s initiative under its Podium programme promises to improve the standards of players, both senior and junior and coaching standards through the launch of more high-class tournaments and special coaching camps around the country. To get more young talents into the sport is the first priority and then follows the consolidation. India may not be an Egypt yet. In that country, it is said squash talents abound in such a way that there is not one but maybe ten players of equal strength in each age category. Not surprisingly, squash world often witnesses champions rolling out in an incredible way from Egypt.

Such a scenario of course still way ahead but for the moment the country needs to ensure talents like Chotrani, Fadte, Joshi and Yuvna as also Paarth Ambani, Sanya Vats and Anahat Singh (the bronze medallists) keep rising and bring more joyful and productive moments in various international arenas. What Indian players have achieved over the recent years is to steadfastly step away from the mood of just participation and move to one of performance. It must be mentioned here that with Chotrani’s success India today is home of three Asian champions, Saurav Ghosal (men) and Joshna Chinappa (women) being the others. What better compliment can there be for Indian squash which has now truly become a medal-winning sport in various international events of importance.

“I feel great about this victory. I beat four higher seeded opponents and all quality players so I am very proud of myself because looking at the draw first I doubted myself but after what I have achieved I feel that I am capable of being a top player in the world.

For the last few months, I really trained on my physical fitness and everything is paying off. I hope to work even harder in the coming years and win medals for India in the world stage.

I would like to thank my parents Manish and Meera for the unconditional support, Cyrus Sir for always believing in me, the coaches Deepak, Surbhi and Dhruv who travelled with us, the SRFI for their continuous support and all my teammates. Lastly, to Mr David Palmer, who really pushed me to my limits in his training programme which I followed. I will soon be leaving to Cornell University and will be in regular training with David Palmer. My plans for the future is to be a top player in the world and win a medal at the World Juniors. My thanks also go to the Government of India, HCL and the clothing sponsor, Dunlop.” 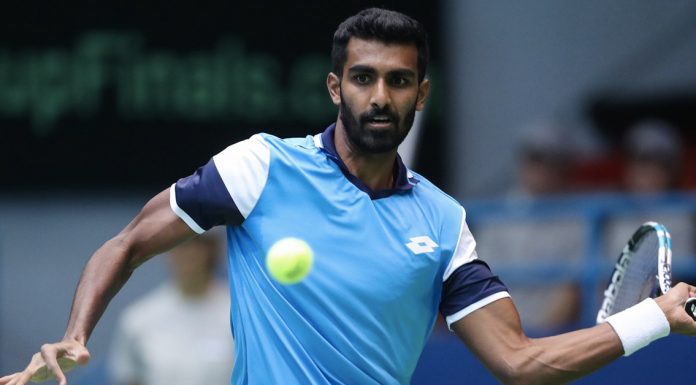 The Bridge Desk - Modified date: January 12, 2021
India's highest world-ranked player Prajnesh Gunneswaran advanced through to the second round of the 2021 Australian Open Qualifiers after battling past Canada's Brayden Schnur on Monday. Prajnesh and Schnur fought for two and a half hours before clinching the match 6-4 4-6 6-2. Ranked 128th...
Read more