37 marathons and counting, this 58-yr-old won’t stop so soon 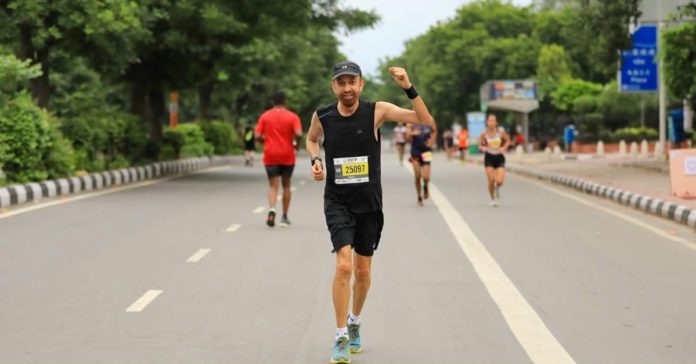 Remember, when you are pushing your pace in a marathon and Pradeep Bhatia, a 58-year-old father, speeds past, you can either end up feeling defeated or inspired. Needless to say, he is not your typical runner. He was never professional and often balanced his training routine with a demanding job at the Indian Oil Corporation Limited (IOCL) based in New Delhi. “I am the most regular of all,” he keeps reiterating exuding subtle spells of pride and vivacity.

But don’t we too often cling on to the inveterate conventional wisdom that marathon performance peaks among runners in their late 20s or early 30s, I ask him. He gushes over it as if that conventional wisdom had taken a beating. Then he replies calmly, “Never experienced that. All I can say is that my time has improved with age. I am running much better now than I was doing at the age of 55.”

He took up running due to health issues. He quickly found he was good at it, and with minimal training, Pradeep was soon placing himself in his age group in long-distance marathons. Having run 37 marathons and 17 half-marathons, his unbounded energy bears the consequence of his passion. After 33 years of being employed as the General Manager of IOCL, Pradeep came upon the pleasures of running in late 2015. He says:

Running, he says, is a sport that one can pause and start at any point throughout life, but the earlier one starts, the better it is. But today, 58 is no longer a division, separating the vibrant and the young from the doddering and slobbering. To find a lot of sixty-somethings marathoning is somehow a rare sight to behold, but what’s noteworthy here is Pradeep’s overarching desire to not quit. Pradeep makes no concessions to his age. He says:

But as long as he can, he is making the most of it and setting ambitious goals. The key to running a marathon is no tough endeavour, as Pradeep says, “You have just got to get out of the bed and go out for a run. During times when I’m feeling unwell, I put on my shoes and go for a run. And when I come back, I am on top of the world.”

I ponder, is that then a metaphor for life? “Life doesn’t end here, at this age. When I now look at the benefits that have come through, it is a motivation in itself,” assures Pradeep, with a gleam in his eye. Indeed. Running isn’t of course bound by rigid age limits, it decodes a sense of physical and mental well-being. Keep on running, folks.

Four months after the International Olympic Committee and officials in Japan postponed the Games amid soaring coronavirus infection rates and lockdowns across the world,...
Read more
132,823FansLike
12,808FollowersFollow
7,418FollowersFollow