Home Shooting EXCLUSIVE: Winning gold at World Cup Final is a boost ahead of...
FeaturedShooting

EXCLUSIVE: Winning gold at World Cup Final is a boost ahead of Olympics — Manu Bhaker

After clinching a gold medal at the 2019 ISSF World Cup Final, Manu Bhaker admitted it was the toughest competition she had taken part in recently. 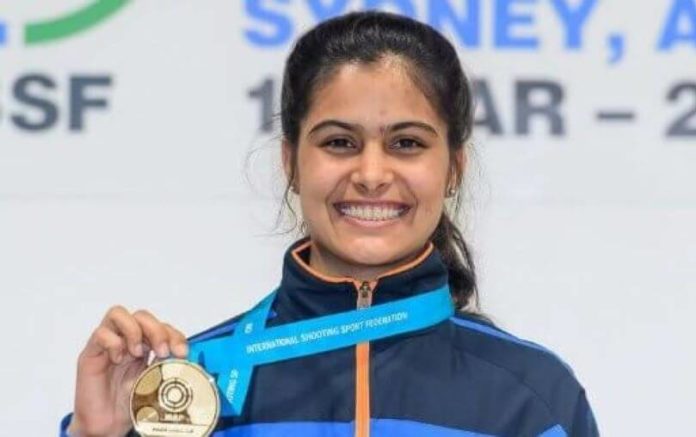 After having scripted history in China, clinching a gold medal at the 2019 ISSF World Cup Final with an amazing score of 244. 7 — a junior world record in 10-metre air pistol, Manu Bhaker admitted it was the toughest competition she had taken part in recently.

Hina Sindhu is the other pistol shooter, who had created history by winning a gold medal in the same championship in 2013. The 17-year old shooter from Goria village in Jhajjar district returned home on Saturday midnight. While speaking to The Bridge on Sunday morning the ace shooter did not hesitate to reveal, “This gold has been the most memorable and precious so far.”

Manu has been actively playing sports since childhood even before she started shooting seriously. She used to skate, practise Manipuri Martial art and even took part in boxing. She also had won medals in boxing in the state-level competitions. Actively playing those sports are someway helping her to progress continuously.

Manu added, “Skating helps to build up concentration and balance. Boxing guides a player to develop physical strength. So while training nowadays for hours, I feel those sports which I had once practised are helping me a lot.” But Manu feels shooting is more about mental strength and concentration. The gold medalist in 2018 Commonwealth Games explained, “I listen to music to concentrate and keep myself relaxed. Even before a crucial match.”

Manu admitted that the gold in ISSF World Cup Final is no doubt a major boost to her preparation for the Olympics next year and when asked about her key challengers in her category, Manu mentioned the name of Ana Korakaki as well as Kim In Jong. “They are top shooters and are extremely consistent. So they always are tough challengers.”

The shooter failed to earn a medal in 2018 Jakarta Asian Games. But Manu asserted, “My performance was not so poor. I had performed well, but it did not help me to earn medal.” Manu concluded she would be traveling to Karni Singh shooting range to resume training. Winning gold medal in World Cup Final seems to be a thing in the past!

ISL 2019-20: Is Tiri a missing part of the jigsaw for Kerala Blasters?

Olive Paul - February 22, 2020
Tiri is incredibly good with the ball at his feet and is adept at playing long balls and sending precise, pin-point field-length crosses  into midfield that completely open up the opposition.
Read more