Deepak Punia stands one win away from becoming the World Champion 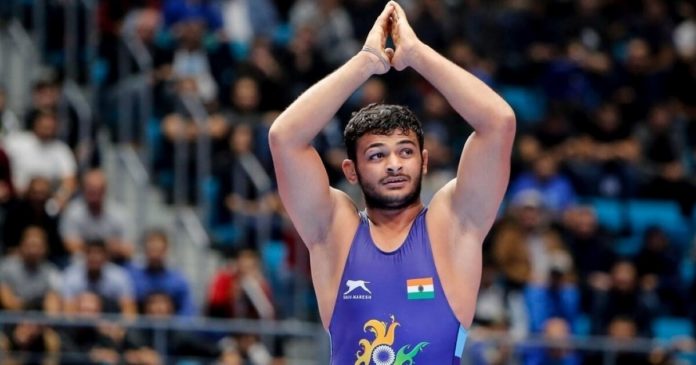 The moment you hear the name Punia in the Indian sports circuit, you will most probably think of the iconic World no. 1 Indian wrestler Bajrang Punia. However, today’s a different day! Another Punia is making waves. Twenty-year-old wrestler Deepak Punia, who is competing at his first senior World Championships, is looking to carve history by winning a gold medal in Nur Sultan, Kazakhstan. Till date, only the two-time Olympic medallist Sushil Kumar has this feather to his cap, who bagged the top honours in the 66kg category in 2010.

With his quarterfinal win, Deepak Punia also became the fourth Indian to seal the 2020 Tokyo Olympics berth at the ongoing World Championship, apart from ensuring four medals at a single edition of the tournament — India’s finest display ever.

The year 2019 has been nothing short of spectacular for young Deepak. After being crowned the Junior World Champion in August this year, he eyes a gold medal at 2019 World Wrestling Championship. Deepak, who is competing in the 86kg category, will take on Iran’s Hassan Yazdani in Sunday’s final. Apart from this, he had also won the Cadet world championship in 2016. He now stands just one win away to become the first Indian to win all three world titles.

In his opening bout of the tournament, Deepak bumped into home wrestler Adilet Davlumbayev. The Indian lad looked extra cautious fearing the partiality in favour of the Kazak wrestlers. Despite trailing 0-5, Deepak fought smartly, whereas constant poking by Adilet brought the Indian to equal points at 5-5. He converted an opportunity but also conceded a throw, and it was 7-7. Adilet’s camp challenged the call but lost. Deepak earned another point while the Kazakh lost one, sending the Indian into the next round.

Moving into the quarters, Deepak locked horns with Colombia’s Carlos Arturo Mendez. With one minute to go, he was trailing 3-6 but pulled off a takedown and then exposed a move to take a 7-6 lead in the dying moments of the tense bout, which was enough to seal a spot at the semi-final and ensuring a berth at the 2020 Tokyo Olympics.

Deepak moved to the final with a commanding 8-2 win over Switzerland’s Stefan Reichmuth in the semis. There was no action in the first period of the semi-final with Deepak gaining a 1-0 lead on passivity. In the second period, Deepak pushed out Reichmuth and took him down for a 4-0 lead. He lost two points but another takedown and expose move clinched it for Deepak.

Punia was born and brought up in Chhara village in Haryana’s Jhajjar district, which is a few kilometres away from Bajrang Punia’s house. Deepak, who immensely reveres Bajrang, had already expressed his delight of having a senior like Bajrang and is proud that he shares the same last name as the World No. 1 (65kg) wrestler.

Punia, who was crowned a Bal Kesari at the age of 12, came a long way starting his career at New Delhi’s Chhatarasaal Stadium. Punia, a junior world champion, holds multiple national age-category titles in the age-group category to his name.

With a chance to become the first Indian to win three different world championships title, the seemingly calm eyes move beyond Tallinn’s success and stare at the biggest bout of his life so far at Nur Sultan that is set to unfold on Sunday. Kiran Dembla - February 25, 2020
I want to make women understand that if they put their mind into anything, they can definitely conquer it. We, women, have the power to make an impact. I am astounded by a common criticism about women bodybuilders, that they are not possibly feminine....
Read more