Believe it or not, there is a sprinkling of sports rivalries to match that of an India vs Pakistan showdown. It is a rivalry since ages, one that is most often punctuated by subtle spells of war. Suffice to say that the two countries were able to perpetuate spirited sports diplomacy for a long time and continued playing each other with tacit whispers of drama both on and off the field. Partition embittered us, the streaks of which engulf the sporting folklore of the two neighbouring states. The recent Davis Cup tournament between India and Pakistan, amid the suffocating swirl of anticipation and hype, adds to another frontline for the closely shadowed diplomatic tension between the two, brewing for ages. The decision of International Tennis Federation (ITF) to postpone India’s Asia Oceania Group 1 tie against Pakistan in Islamabad has given an upper edge to the spirited sports diplomacy turning upside down.

Multiple attempts by the All India Tennis Association (AITA) to shift the tie to a neutral venue or postpone it until political rigidity simmers down finally bore fruit after the tie was rescheduled for November under ‘exceptional circumstances’. One shudders at the thought of the spectre of terrorism hovering over the world of sports lately in ways we haven’t seen since incidents that followed 9/11. The Indian tennis fraternity seems to have heaved a prompt sigh of relief. And this immediately brings to one’s mind the horrifying siege of Sri Lankan cricket team on its way to play a match in Lahore ten years ago.

India and Pakistan faceoff in cricket is magnified and warped by things beyond the game itself, and why wouldn’t it be, especially when several hundred million eyeballs are watching on. Players often succumb to the stultifying pressure that underwhelms their sporting spirit as they are overdriven by the impulses of the sport. It is, however, suffice to say that only a handful of sporting contests carry as much weight. India-Pakistan clashes morph from a mere sporting affair to a much bitter encounter of conflicting nationalism and cultural chauvinism on and off the field.

Normalcy struggles to set in, but one ponders at how the on-field dynamism of the teams get often overshadowed by the cumbersome diplomatic tautness between the two neighbouring states, almost always at loggerheads. Burdened with the weight of political assertion, rebellion and defiance, the ripple effects are assuredly felt beyond just a 50-over match. Then came Pulwama. Outbursts of hyperpatriotism and extreme political fervour followed. Amid a series of arguments, crooked versions and news bulletins that called to fore the role of every single political participant, India refused entry to a three-member Pakistani team of shooters. Pakistan’s non-participation at the ISSF World Cup triggered a quick review by the International Olympic Committee’s right to host events. While few argued that visas to the Pakistani team had been cleared, the Pakistan shooting federation maintained a rigid stance, saying that the athletes were never granted visas. The IOC exhibited an uncompromising posture, debarring India to hold sports events until participants from all countries are guaranteed entry. Wrestling then followed suit. The global body, the United World of Wrestling (UWW) instructed sports federations to shun communication with the Wrestling Federation of India (WFI) following visa denial of Pakistani shooters in the World Cup.

The political ramifications make India-Pakistan rivalry unparalleled in all of sports. No bullets triggered, but we cannot sit back and stop venting our fiery passions against our neighbour, as we fall victim to the hysteria and significance of India-Pakistan, this time outside politics, Kashmir, and firm communalism pillars.

The Indian skipper has impressed with her captaincy but her poor form with the bat could be a cause of concern as her side prepares for the semifinal of the T20 World Cup.
Read more
129,480FansLike
11,142FollowersFollow
6,713FollowersFollow 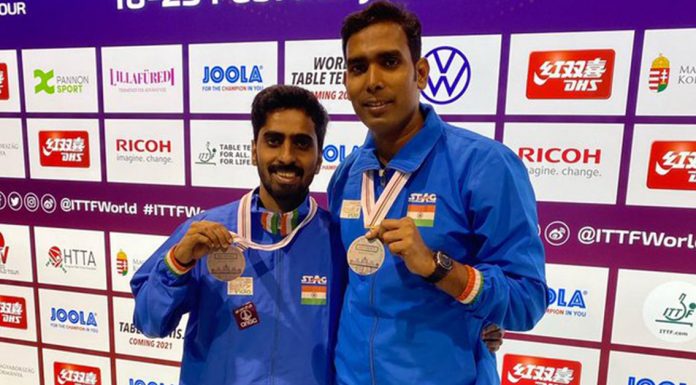