The Indian women's cricket team registered a convincing win over the hosts Australia in the series opener in Sydney on Friday. The win came on the back of the bowlers, especially Poonam Yadav whose 4 for 19 dismantled Australia’s middle-order.

Australia were 60 for 2 while chasing and at that point, it was a sure win game for the mighty Aussies who already restricted the visitors within a total of 132 on board.

However, India T20 captain Harmanpreet Kaur had a different thought as her trump card Poonam Yadav sealed the deal for India. She praised leggie’s stunning bowling in the post-match press conference as well. While she was asked if she believed of a win at that position, Kaur gave a positive reply.

“Yes, definitely. We do have a good spin attack and they can turn the game for us. Poonam Yadav did a great job and I think credit goes to our bowlers they trust their selves and win the game for us,” told Harman.

She even revealed the reason of playing Poonam quite deep. The leggie came to bowl in the 9th over and since then the course of the game changed completely.

“She is a very good T20 bowler. She is someone who always bowls for the team. It’s not easy to play her as she is a little slow in the air. In t20, batters love the ball comes into bat but when you have to hit her, you need some patience as well as skill. That’s the reason we used her late when we needed wickets,” shared Kaur.

However, India had a poor outing with the bat. While Shafali Verma got off to a flying start, Smriti Mandhana fell very cheaply. Even Sharma too failed to contribute her start and India lost the captain also right after the powerplay. But Jemimah Rodrigues and Deepti Sharma steadied the ship with a fifty-run stand and took the side to a decent total.

“Our plan was very simple. We wanted to use the first 6 overs and we had some 40-45 runs as well. Later on, we were looking for singles. I know our top 3 batters got out early because in T20 you need to take the risk when you look for 130-140,” said the captain.

She further added, “Australia have a long batting order and we can’t think 130-140 is a defendable total. Initially, we were looking for 140 but the plan got changed later and became 130-135. Deepti n Jemi did a great job in the middle as it’s not possible to click the full batting order together but we are happy for them.”

However, the captain didn’t blame the pitch as she already knew how the pitch will be as she is quite familiar with the wicket. She is a regular member of Women’s Big Bash League.

“I knew this pitch as I have played quite a few times on this pitch. It’s a little tricky and in T20 when batters don’t get runs they try to hit and then bowlers get wickets easily,” shared Kaur. “In t20 you can’t set a fixed batting line-up. You have to keep changing. I think they did exactly that. But we are not bothered about others. We just wanted to stick to our plan.”

However, she expressed that they are not going to sit back and relax as they have a long way to go.

“In T20 format, u can’t relax as any team can beat you anytime. U have to keep winning and keep motivating the team. But we are happy as it was the first game and we wanted to win. This has set the tone as well. We know upcoming games are important and we have to win those games also. We are looking positive to do well in the future,” concluded India T20 captain. 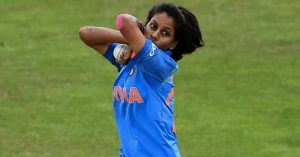 Poonam Yadav (Source: She The People)

Poonam was a little bit upset after missing her hat-trick as Taniya Bhatia failed to grab the outside edge of Jess Jonassen. The previous two were Rachael Haynes and Ellyse Perry. While Haynes missed the delivery while coming down the track and trying to hit and got stumped, Perry also missed the googly and it dislodged the bells.

“Of course, because it was the third time but I did what the team needed. At that time we needed the wicket and I did that. I bowled dot balls,” added Yadav.

However, she didn’t think about any pain while playing while she was asked about her finger injury. She later shared how she got injured.

“During an outdoor practice of our fitness camp, I just casually went for a catch and got hurt but didn’t realize it will be this bad. After that, I focused on diet and fitness because I knew I can ball any time,” she said. “Every player scares the injury but I knew I will return as this is a part of every player. I hope I will do well for future games.”

Moreover, she has practised some variations as well but she promised to use those in right times. Even she changed her diet as well to get a better result.

“I left glutton and living on rice which I don’t like but I do for the team. I do have variations but I do try to use it in right times, especially when we have sufficient runs on board,” added the leggie.