Women’s T20 World Cup: What would an Indian win at MCG mean for women’s cricket back home?

With history hovering on the horizon and enticing to be embraced, India take on Australia in the final of the ICC Twenty 20 World Cup at the MCG on Sunday. And no, it is not the gentlemen who are in action. At some point in the fading afternoon light on Sunday, when skies across India transition from daylight to darkness, a seismic shift may have begun six thousand miles away in the floodlit magnificence of the Melbourne Cricket Ground (MCG), ensuring that 8 March 2020 is the latest entry in the gilded list of Indian cricket’s red-letter days.

With history hovering on the horizon and enticing to be embraced, India take on Australia in the final of the ICC Twenty 20 World Cup at the MCG on Sunday. And no, it is not the gentlemen who are in action.

A place among the pantheon

Three of the aforementioned dates are, of course, occasions of India’s World Cup triumphs. In 1983, a relatively unheralded Indian team- led by a charismatic Kapil Dev- outclassed one of cricket’s greatest constellation of performers in the West Indies on the hallowed turf at Lord’s. In 2007, a swashbuckling Indian squad, rejuvenated by the injection of youth, edged out Pakistan in a scintillating exhibition of the shortest format of the game in Johannesburg. In 2011, India fulfilled a national obsession by becoming the first cricketing nation to become world champions on home soil, seeing off Sri Lanka’s golden generation on an unforgettable evening in Mumbai.

All these victories were conjured by the men- groups of inspiring athletes engineered to win and enrich the sporting heritage of their country. This Sunday, however, the mantle of enlarging that heritage rests with the women. Having succumbed to final defeats in the 50-over World Cup in 2005 and 2017, the Indian women’s team has another chance at cricketing immortality in what is billed to be the most-watched event in all of the women’s sport.

As the ICC and Cricket Australia endeavour to pack the MCG to the rafters, a potential audience of 90,000 people at the ground could bear witness to India’s first World Cup won by its pioneering women.

There is no doubt that should India prevail against four-time champions Australia in the backyard of the baggy green, it will be the single biggest achievement in the annals of Indian women’s cricket. With the rise in popularity of T20s, the twenty over World Cup no longer plays second fiddle to its older and longer cousin. This is evident in the ICC’s subtle rebranding of the 2020 editions for both the men’s and women’s game, by calling the competition the Twenty 20 World Cup instead of the erstwhile World T20.

In terms of pure on-field merit, an Indian success would fracture one of the most enduring narratives characterising women’s T20 cricket since its world championship came into being in 2009- the streak of Australian dominance. Out of the six former installments of the T20 World Cup, Australia have reached five finals, winning four of them, including a hat-trick of titles between 2010 and 2014. They are also the reigning champions, having redeemed their solitary final defeat at the hands of the West Indies in 2016 by roaring back to the summit two years ago on Caribbean soil against the English.

Even without the services of their greatest cricketer Ellyse Perry, Australia remain a formidable unit, one that is accustomed to raising its game on the biggest stage. And yet, for all their cricketing pedigree, Australia- led by the irrepressible Meg Lanning- have already been beaten by India in the tournament opener, and form and momentum would mean that a repeat of that result would come as no surprise to those who have followed the progress of Harmanpreet Kaur and Co down under.

India has fielded some outstanding individuals on the 22 yards over the last decade. Run machine Mithali Raj and speed merchant Jhulan Goswami are just two among the many remarkable talents that have donned the Indian blue and made it proud.

The current Indian outfit, though, does not merely boast of excellent individuals, but is an impeccably harnessed team that does not rely on soloist brilliance alone. The opening duo of the hard-hitting Smriti Mandhana and the still more hard-hitting teenage sensation Shafali Verma are backed up adequately by the experience of Harmanpreet Kaur, the versatility of Jemimah Rodrgiues, and the adaptability and all-round compactness of Deepti Sharma. With the ball in hand, Poonam Yadav has woven quite the magic yarn this World Cup, ably assisted by the disciplined and underrated medium pace of Shikha Pandey. Just like India’s previous World Cup-winning squads, this is a collection of players that enjoys each other’s achievements, and should the rub of the green go their way, could permanently establish their seats in the pantheon of India’s cricketing greatness.

A place in the collective imagination

Cast your minds back to the day when the Indian men’s team fell short of reaching the 50-over World Cup final against New Zealand last year and the look of resignation in the eyes of Mahendra Singh Dhoni as his supposed swansong ended in agony. Dhoni’s emotions were an accurate barometer of those of his compatriots, with the whole country swept by a surging sorrow and the possibility of what might have been. The mood permeating the length and breadth of India was not too different when Virat Kohli could not pull off a miracle with the ball in a last-over semi-final exit at the Wankhede against eventual champions West Indies in the 2016 World T20.

It would be fairly accurate to presuppose that were the Indian women to be outgunned by Australia on Sunday, there would be no similar occurrence- no nationwide despair, no collective anguish cutting through our variegated social fabric. Yes, there would be a set of passionate followers who would feel disappointed, but in the absence of conflating the fortunes of the Indian women’s cricket with those of India, a loss would not send more than a billion people into a short-term meltdown.

Notwithstanding the infrastructural lacunae, the residual social stigma, the relatively underwhelming media and commercial fanfare surrounding women’s cricket, the biggest factor in the Indian women not marveling the rank and file of Indian society may just be the lack of a singular, monumental win. An outcome that can take women’s cricket from an increasingly popular sporting niche within gradually widening cognoscenti to a phenomenon that forms an integral component in the life of the average Indian.

The rampant rise of Indian female superstars in badminton could not have been possible had the likes of Saina Nehwal and PV Sindhu not dominated the international frontier, racking up medals when it mattered most. Before them, the same held true for Sania Mirza, who resuscitated women’s tennis in India with her string of stupendous showings on the most famous courts in the world. A similar golden opportunity awaits the 11 women who will be taking to the MCG in the final. Undefeated in the tournament till now, these Indian women represent the culmination of a journey they did not start, but one they can most certainly precipitate into something exceptional, something ever-lasting.

The buzz surrounding a women’s IPL, the subdued but simmering mutterings of equal pay, the constructive investment of time and resources into raising the standard of women’s cricketing facilities, are all developments that will edge ahead in the time to come, but an Indian victory at the MCG would propel them forward with urgency, with a zeal that shatters the imaginary glass ceiling confining women’s cricket from taking its long due spot in India’s collective imagination.

I do not imagine too many families across India would have huddled together this past Thursday to watch India’s eventually rain-washed semi-final against England. At this stage, India’s incredible progress in the T20 World Cup is still a convenient afterthought for most, with news from the event filling in the gaps from the aftermath of the men’s disastrous display in New Zealand. Twitter is not abuzz with hashtags following Shafali Verma’s heroics and nor have I seen any of my friends- enthusiastically engrossed in providing over by over commentary during IPL games- document the women’s matches on social media.

Major national dailies have only had a place for the Indian women’s team in the cricketing corners of the back pages: no splurging of headlines, no front-page trendsetters. And yet, this is not to discredit the slowly but surely improving stature of women’s cricket in a country that is taking baby steps towards the day when parents encourage their daughters to be the next Harmanpreet Kaur or Smriti Mandhana.

An Indian coronation on Sunday would form the immediate rallying point for Indians who have been craving for a moment of unadulterated glory, one free from the second-hand serenading that often accompanies accomplishments in women’s cricket, as if the women’s team were an enhancing appendage for their more illustrious male counterparts. For the rest of the country, it would be an awakening, a baptism by fervor that forces them to consider, if not necessarily change, the way they consume their cricket, and by extension, compose their culture.

The time is now, the space is theirs- India’s women cricketers are here to shine. And if and when they win, it is up to us- as spectators, fans, and devotees of Indian cricket- to comprehend that the women in blue have not merely emulated the script and followed the footsteps of the men who preceded them, but have crafted their own story, left their own glorious trail.

Also Read: Key numbers and stats from Team India’s road to the final

Tennis is played and appreciated in most nations around the world. The sport in which we can see the best players of all-time at this...
Read more
Others

Indians have tasted lots of success in many sports. From cricket to tennis to chess, various sportspersons have brought numerous laurels to the country....
Read more
Athletics

One of the towering figures of Indian athletics had been Gurbachan Singh Randhawa, who was the first Indian to win the Arjuna Award in...
Read more
Football

The firsts of Indian Tennis

India has had quite a lot of success in Tennis. There have been Olympics medals, Grand Slam victories, world number one rankings and whatnot....
Read more 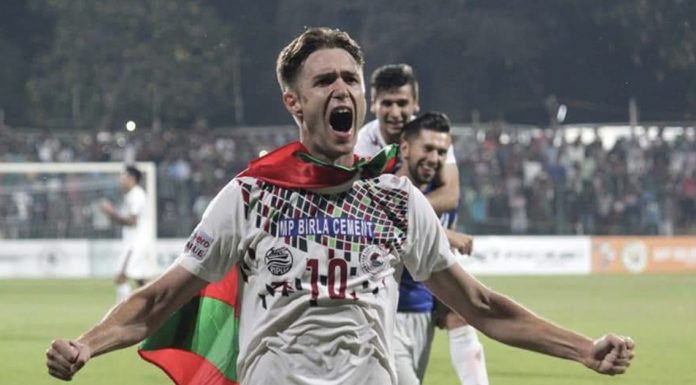