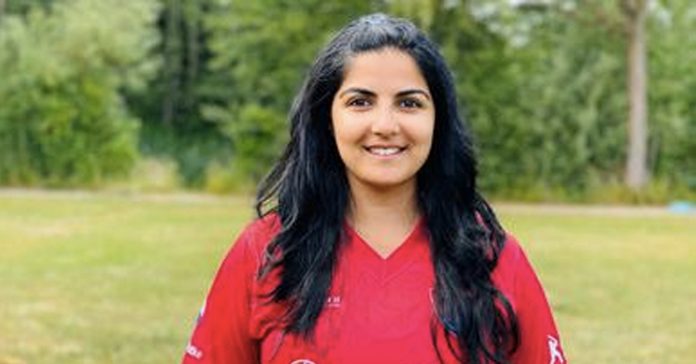 India’s Sharanya Sadarangani, on Monday, June 29, became the first women’s cricketer to take part in the ongoing edition of the European Cricket Series T10 League (ECS). She played for the KSV Cricket Club in the match against PSV Hann Munden. Her side lost the game by five wickets. KSV made a lacklustre start and were reduced to 51 for nine in only the seventh over.

Sadarangani walked in at number eleven after Gulraiz Mustafa rattled Masoud Dostkhel’s woodwork. She stepped on to the field days before her 25th birthday, but couldn’t perform. The youngster played the defensive shots a couple of times before she was run out, trying to hustle for a quick single. The KSV were eventually bowled out for 53 runs in the eighth over.

Sadarangani had a decent outing with the gloves though. She took a brilliant catch off a rising delivery, but the batsman, Adeel Ahmad, wasn’t given out. But two balls later, the batter eventually perished. Apart from creating history in the ECS League Sadarangani, she had once played alongside India women’s Veda Krishnamurthy back in 2012 while playing for Karnataka U19.

As far as the match is concerned, KSV started in a great fashion, scoring 10 runs off the first five deliveries. Shoaib Khan smashed a four and a six to take his team off to a flying start. However, he got out in the last ball and the dismissal triggered a collapse in their batting. Barring Sulaiman Kakar, who churned out 22 runs, there wasn’t much contributions from the others.

Chasing a mere 54, PSV Hann Munden made a shambolic start as well. The KSV opening bowlers reduced the opposition to six for four after three overs. Sultan Shah, who plays for Germany U19, got two crucial wickets and conceded only one run in his two overs, keeping a check on the scoring.

However, KSV couldn’t hold on to their momentum. Awal Safi bailed the PSV Hann Munden out of jail, managing an unbeaten 29 off 16 deliveries and scripted victory. It was the first match of the Kummerfeld leg of the ECS.