The Indian Eves held their nerve to go past West Indies Women by five runs in the fourth T20I to take a 4-0 lead. 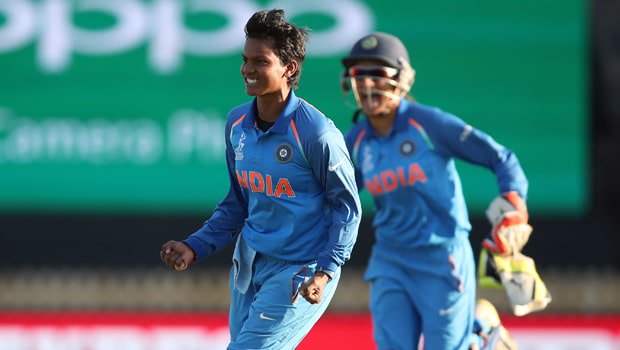 In a match that was curtailed to nine overs due to rain, the Indian Eves held their nerve to go past West Indies Women by five runs in the fourth T20I to take a 4-0 lead. Despite resting several of their senior guns for the particular game in order to test their bench strength ahead of the World T20 Cup that will be held next February, the Indians showed why they are firm contenders for the title as they defended a low score of 51 despite an iffy start to the game.

After a long wait, the match begun with West Indies sending India in to bat first. The visitors lost wickets at regular intervals and slid to 32 for 6 in just seven overs, with Afy Fletcher starring with the ball. She returned with figures of 2 for 3, while Hayley Matthews inflicted further damage with figures of 3 for 13. Only Pooja Vastrakar could reach the double-figure mark with the bat for India.

In reply, the West Indies started off cautiously. They were well on course for their first win in the T20I series with the score reading 31 for 2 after seven overs, but the Indian spinners once again wreaked havoc as they got three wickets in the next two overs. Radha Yadav, who bowled the eighth over, sent back Chinelle Henry, while Anuja Patil, in charge of bowling the last over, kept things tight and guided her side to a nervy win.

The final game of the series will be played at the same venue in Guyana on November 20.

Women’s T20 World Cup 2020: It is bowlers right to get me out says Smriti Mandhana on mankading Press Trust of India - February 26, 2020
The Indian women's cricket will aim to inch closer to a semifinal berth when it takes on New Zealand in the ICC Women's T20 World Cup on 27 February.
Read more