Commonwealth Games 2018: Indian weightlifters are bringing medals, but at what cost? 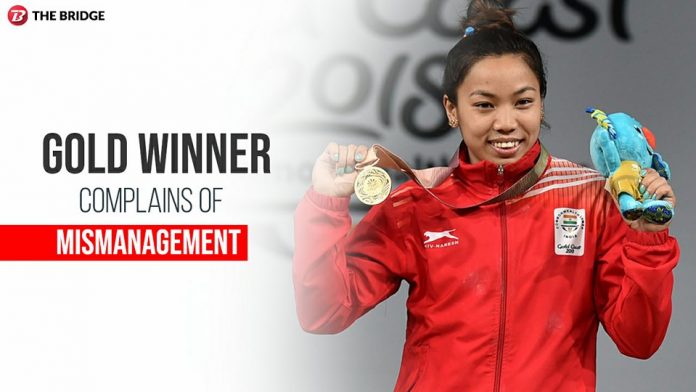 The country is celebrating Mirabai Chanu and her historic feat at the Commonwealth Games 48 kg weightlifting event, but something she said soon after winning gold must make us stop and think. It’s something all Indian weightlifters are facing

‘I don’t have a physio with me here in the competition. He was not allowed here, I did not get enough treatment coming into the competition. There is nobody, we did tell officials but nothing happened. I had requested that my physio be allowed but he was not. But we are helping each other and managing so far,” she told PTI.

The physio in question, Aakrant Saxena, has been barred from staying with the contingent of Indian Weightlifters at the Games Village, and has been staying at a nearby hotel since Monday. Saina Nehwal’s father, who had faced a similar problem, had his ‘privileges upgraded’ after a leaked letter threatened to escalate the crisis. Saxena, whose role as physio may in fact be more vital to the athlete’s physical (if not mental) well-being, had no such luck. He is not allowed to be at the competition venue or be with the lifters after 8 pm.

The wrestling federation made two written requests – in February and March – to include Saxena in the list of officials to be part of the Indian CWG contingent, and the request was cleared by the Sports Authority of India on March 21.

The sports ministry then ordered that the number of officials should not be more than 33% of the number of athletes. The Indian Olympic Association (IOA) loudly protested, leading to assurances that some extra officials might be cleared if their role was deemed necessary.

The physio in question, Aakrant Saxena, was denied entry into the Athlete's Village. His name was apparently included in the absence of the Team Manager but the IOA and MYAS lists of the CWG contingent do not figure his inclusion. pic.twitter.com/0wQUDj3htH

He accompanied the weightlifting team to Australia as a personal coach, with an assurance from the IOA that his role would be upgraded. The Mail Today reported that IOA officials at the venue, after seeing Saxena ‘running from pillar to post for his boarding’, arranged a ‘P’ category accreditation for him on Sunday. This was still not good enough to stop him from being barred entry on Monday as his ‘accreditation was done late’.

Earlier this week, India’s star lifter Satish Sivalingam told Indian Express, “He (Saxena) needs to be there for the simple reason that our recovery starts only in late evening. Right now, he has to leave the village at 8 so it doesn’t serve any purpose.”

His statement came a day after Saina Nehwal’s tweets made national headlines, but it seems to have fallen on deaf ears.

Gururaja, who won silver in the 56 kg weightlifting event, said, “My physio is not here, so I haven’t been able to get the treatment that I need for my knee and sciatic nerve.”

Today, Sanjita Chanu won the second Gold for the country after Mirabai Chanu’s top performance yesterday. 3 medals in 2 days and plenty more to come. Do we have any answer for our weightlifters? Indian Tennis Daily - Modified date: June 30, 2020
Local Bengaluru boy Adil Kalyanpur is raring to go at his home ATP Challenger event in Bengaluru, where he has gotten a wildcard in both the singles and doubles competition. In this chat, Adil talks about his preparations for the big ATP Challenger, his...
Read more