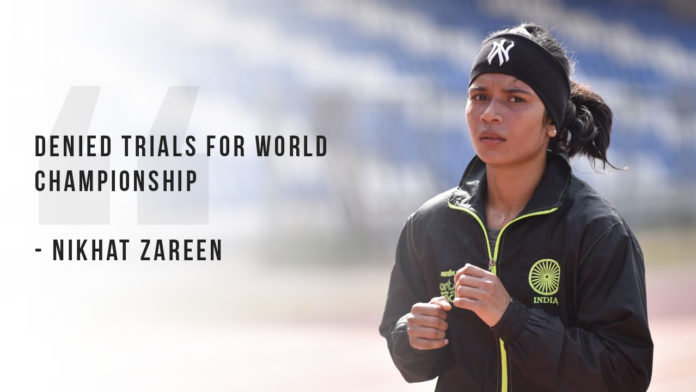 Indian boxing courted a ‘needless controversy’ over the selection trials of our women’s boxers for the upcoming AIBA World Boxing Championship to be held in Russia in October, with iconic boxer MC Mary Kom being handed a direct entry in the flyweight category (51-kg) for the marquee event and granted a ‘selection trial exemption’.

The move by the Boxing Federation of India (BFI) not to conduct trials for the flyweight category evoked a ‘strong reaction’ from talented youngster former and junior world champion Nikhat Zareen, who was keyed up to make the most of this opportunity and qualify for the 2019 AIBA World Boxing Championship. It is learnt that the 23-year-old Hyderabad girl has written a letter to the Boxing Federation of India (BFI) strongly voicing her displeasure over being deprived of taking the trials. It may not be wrong to suggest that in all fairness Mary Kom is the country’s best bet in the flyweight category, but that cannot justify the move to exempt her from featuring in the selection trials.

Rajesh Bhandari, Chairman of BFI’s selection committee, said it was wrong to suggest that the federation is doling out any favours to Mary Kom. “Mary is India’s best bet in the flyweight category and has won two gold medals this year (at the India Open and President’s Cup in Indonesia. She is in the best form of her career, and we all should back her for the World Championship.”

Bhandari feels that no attempt was made to discourage Nikhat. “Nikhat is an outstanding boxer, and she has been winning medals on a consistent basis and is an exciting future prospect. We don’t want to discourage a talent like her. It is wrong to say that she was denied the trials as she was a told a day before the trials started on August 6 that there will be no trials for the 51-kg and 69-kg categories (World and Asian bronze-medallist Lovlina Borgohain made the cut).”

The chief boxing selector said the decision not to conduct trials for the two categories – 51-kg and 69-kg was deliberated upon for over two days and was not taken in a hurry. “The whole thing was blown out of proportion – we got a request from Mary’s coach (Chhotelal Yadav) that she should be exempted from the trials considering her recent good run. The BFI discussed it in a threadbare manner and took a call to not to hold trials for the 51-kg and 69-kg categories.”

Bhandari was far from amused with the talk that she came all the way from Hyderabad to Delhi for the trials. “All the girls were in the national camp. Nikhat was told a day before the start of the trials that there will be no 51-kg trials. I won’t like to comment on what Nikhat has said on written to the BFI. All I can say that the move not to conduct trials was taken after much deliberation.”

Rewind to the 2009 Senior Nationals at Jamshedpur, where a 19-year-old Pinki Jangra got the better of Mary Kom in the quarterfinals. Again in the trials for the 2014 Glasgow Commonwealth Games, where Pinki Jangra had defeated Mary Kom in a closely-contested bout. Mary Kom then sensationally claimed that the trial was “fixed” and accused the organisers of racial discrimination on account of her northeast background. For the record, Jangra went on to win a bronze at the 2014 Glasgow Commonwealth Games.

A few months later, Mary Kom defeated Pinki Jangra in the trials for the 2014 Incheon Asian Games and this time it was Jangra, who cried foul, alleging that the organisers favoured her rival. Pinki Jangra clashed again against MC Mary Kom in the selection trials for the 2015 Asia-Oceania Olympics Qualifiers, – a qualifying event for the 2016 Rio Olympics, a contest where Mary won but subsequently failed to make the cut for Olympics.

Clearly, Indian boxing could have done without this unwanted controversy.

Pinki Jangra lost to MC Mary Kom in the 51kg flyweight category selection trials for the 2015 Asia-Oceania Olympics Qualifiers held in Quinian, China, from March 23 to April 3 – Qualifying Event for the 2016 Rio Olympics.

Mary Kom defeated Pinki Jangra in August 2014 in the trials for the 2014 Incheon Asian Games. The Haryana girl cried foul, alleging that the organisers favoured her rival.

Pinki Jangra defeated Mary Kom in the 48-51kg flyweight category selection trials in May 2014 for 2014 Glasgow Commonwealth Games – Jangra defeated Mary Kom in a closely-contested bout. Mary Kom made a sensational claim that the trial was “fixed” and the organisers had conspired against her to ensure Jangra won the bout. She had also accused the organisers of racial discrimination on account of her northeast background. Jangra went on to win a bronze in the CWG.

Pinki Jangra (19-years then) defeated Mary Kom in the quarterfinals of the 2009 Senior Nationals at Jamshedpur. Press Trust of India - Modified date: May 28, 2020
The much-delayed 36th National Games, scheduled for October-November in Goa, was on Thursday postponed indefinitely due to the COVID-19 pandemic. The Indian Olympic Association (IOA) recently asked the Goa government to host the National Games as scheduled from October 20 to November 4 this...
Read more