Jagdeep Hooda, India's former national boxing coach, who is also the personal coach of veteran boxer Vikas Krishan Yadav, is elated to see his mentee's career peak as he is qualified to play at his third Olympic at Tokyo 2021. Vikas, who bagged a gold medal in 2010 Asian Games and 2018 Commonwealth Games, is the only second Indian pugilist after Olympic bronze medallist Vijender Singh to qualify for three Olympic.

Hooda had trained Vikas for almost over a decade till 2019 and was there with him at the 2012 London Olympics and 2016 Rio Olympic Games as he was the Coach of the Indian men's boxing team. The boxer, though presently training under high-performance director Santiago Nieva and head coach CA Kuttappa, is still in touch with coach Hooda. Jagdeep Hooda, who hails from Rohtak, Haryana, has travelled to more than 30 Countries worldwide as Indian boxing team coach. He went to three world championships, two Olympics (2012 and 2016) and several other international tournaments in his illustrious coaching career spanning over two decades.

In 2007, he went to USA AIBA World Boxing Championship as the team coach with Vijender, Jai Bhagwan and Jasbir Singh. Hooda also had trained current World No. 1, Amit Panghal when he went for 2019 World Championships in Russia as team coach where Amit competed in 52kg weight and brought a silver medal home.

The 50-year old was also the coach of Gujarat Fortune Giants, the sports franchise which was the part of India's first-ever premier boxing league (Big-bout Boxing League).

Discussing his laborious coaching career, Jagdeep Hooda caught up in an exclusive free-wheeling chat with The Bridge.

Q- How was the journey so far being the personal coach of Olympian Vikas Krishan? Since when was he training under you? Share your experience of some fights and tournaments.

It has been a great journey so far. I first trained Vikas for Junior Camp which was held in Hisar in 2006. I’ve been his personal coach since 2011. He won a bronze medal in the World Championship held in Baku, Azerbaijan in 2011 and hence qualified for the London Olympics. In 2014, he won a Bronze medal at the Asian Games held in Incheon, South Korea and again qualified for the Rio Olympics.

Q- How are you feeling about Vikas being qualified for Tokyo Olympics? What do you think, will he be able to achieve his aim this time in his 3rd Olympics?

It is great to know that he has again qualified for the Olympic Games, this time to be held in Tokyo and became the only second Indian male boxer to qualify for 3- Olympics after Vijender to do so. And as always, he has worked very hard to achieve his target, I know his potential and I really hope he gets successful this time. 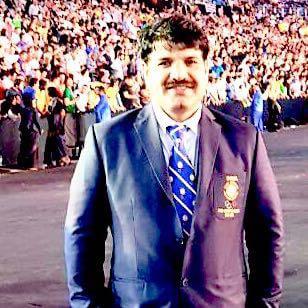 Q- 2018 was a golden year for Vikas, he had won the gold medal(69kg) in Gold Coast Commonwealth Games and Jakarta Asian Games. What was the strategy and training methodology behind the success?

Q- Tell us about your sporting journey as a player and coach so far?

As a player, I started my journey from Haryana Agriculture University, Hisar. I won 5 consecutive gold medals in All India Inter-University Championship and 7 medals in Nationals including Gold & Silver.

In 1992, I won the Bronze Medal in the Mayor's Cup held in the Philippines, which was the Olympic qualifying tournament.

In 2003-04, I started my career as a Coach to the Senior Indian Boxing Team and worked with many Indian star players like Vijender Singh, Dinesh, Jai Bhagwan, Manoj to name a few.

In 2007, I went to the World Championship held in Chicago, USA as Indian Team Boxing Coach. In 2011, I went for the Arafura Games with Vijender & Akhil where both won bronze medals. After that, I was with the team for 2012 London Olympics, and the journey continued where we achieved a lot more with sheer hard work and dedication where I also participated as a Coach in a lot of tournaments and camps in between. I was also with the team for the Rio Olympics held in 2016.

Q- What's your next big goal/target?

Q- Tell us about the Major events you have served as a coach like Internationals, World Championships, Olympics?

Q-Which major Internationals you went along with Amit Panghal (52 kg) as a coach? Please share your experience, how did you feel to coach the world no.1?

In 2019, I went to the World Championship which was held in Russia where he won the Silver medal and became the first-ever Indian boxer to do so.

And Manish Kaushik won the Bronze medal. It was also India’s first time to get two medals in a World Championship in men’s boxing. So, it felt great to be a part of it.

Q-You were the coach of the big bout boxing league winning team i.e. Gujarat Giants. How was your experience as coach in the 1st ever season? Do you think Amit helped the team win the title defeating Punjab Panthers in the final?

It was the first time that a Boxing League was started in India, and as the Coach of Gujarat Giants team, I was glad to witness our team’s glorious win. It was a wonderful experience as a whole with such a dedicated team. Yes, Amit did play a role in motivating the team players, he was very optimistic throughout and did amazing in the ring. All our team players did their best and helped the team to register the overall win.

Q-From how long have you been serving the Indian Boxing team as a Coach?

I started in 2000, so it has been about 20 years of me serving the Indian Boxing Team as Coach, in which I travelled more than 30 nations worldwide and I hope I keep serving team for long.

Both of the players Vikas as well as Amit have worked quite hard and have achieved a lot by continuously thriving and have made the nation proud by creating histories and in the opinion of coach Hooda, both will have a fair chance of reaching the medal stage if they use their long reach judicially and have the luck of a favourable draw. Currently, Jagdeep Hooda is serving the Indian railways team as coach and have great plans for the future, he is looking forward to seeing Indian pugilists performance Tokyo Olympics.