Amid ‘life-changing’ debates of how much Beyonce would have charged to do a private show at Isha Ambani’s wedding, there came two ‘insignificant’ notifications – both Saina Nehwal and Vinesh Phogat had tied the knot with their respective longtime boyfriends and the wedding pictures were already out!

No drama, no build up, no talk of designer dresses, not a word about the decked up venues! Just like this, four Indian sportspersons had got hitched and life had moved on.

Yes, four. Saina Nehwal got married to shuttler Parupalli Kashyap after more than a decade-long relationship. Saina and Kashyap have been traveling with each other on tours since they were very young and became each other’s support system in time.

"We started traveling for bigger tours from 2007-08 onwards. We played tournaments together, trained together and slowly, started paying more attention to each other's matches. In the competitive world that we live in, it is difficult to get close to someone. But somehow we both found it very easy to talk to each other, talk about our matches. The feeling gradually grew," Saina had said a few days before getting married.

Vinesh Phogat, on the other hand, took marriage vows with fellow wrestler and two-time national gold medalist Somvir Rathee. Vinesh and Somvir have known each other since 2011 as both work for the Indian Railways which became the breeding ground for their love.

Indian archers Deepika Kumari and Atanu Das had also exchanged rings in a private affair earlier this month; both of whom were part of the Indian contingent at Rio Olympics. These stories, in essence, are as endearing and as awe-inspiring as any other celeb love story can be. These athletes chose one from their tribe as life partners because who else would understand their priorities. Who else but Kashyap would understand when Saina suddenly decided to prepone the wedding by two days due to her professional commitments? Saina and Kashyap were supposed to marry on December 16. The wedding invites were already out. But, with the Premier Badminton League scheduled to begin from December 20 and the qualifiers for the Tokyo Games to follow, the couple got married on the 14th. Dedication personified.

The round of big-fat Indian weddings that began with Virat Kohli and Anushka Sharma has had a flurry of entrants in 2019. Sonam Kapoor and Anand Ahuja got the ball rolling with a sumptuous wedding ceremony and there has been no looking back for the Indian celebs since.

Each couple took it a level further and the Indian media and the masses kept gaping at the bigger and fatter numbers that kept getting attached to these weddings. Even the minutest details of the pre-wedding celebrations, to the wedding, to the receptions, to the after-parties, to the costumes, to the fashion designers, to the venues, to the relatives, to the splurged money was highlighted by the media and the youth was left starry-eyed at these Cinderella weddings they so wished they could host.

Deepika Padukone and Ranveer Singh were next as they decided to have a destination wedding in Italy. Headlines like ‘First pics from Deepika and Ranveer wedding venue at Lake Como in Italy’ became par for the course and Indians revelled each and every development as if one of their own was getting married.

It was then time for Priyanka Chopra and Isha Ambani to make headlines and they had the Indian public totally head over heels as they hosted the likes of Sophie Turner (Game of Thrones star) and Hillary Clinton respectively. While the extremely unassuming ceremonies might have come as a surprise for some, it was on the expected lines for the people following Indian sportspersons for some time.

For athletes who scrape through to get every penny of financial support, at least at the start of their career, to keep their dream alive, it would just not make any sense to splurge millions on an opulent party.

This is how they have always lived their lives; staying away from the limelight, making the most of the resources at hand and getting the job done. And they would not choose it any differently.

In fact, Vinesh and Somvir had got engaged in August this year at the IGI Airport itself after Vinesh returned with a gold from the Asian Games. Yeah, let it sink in. 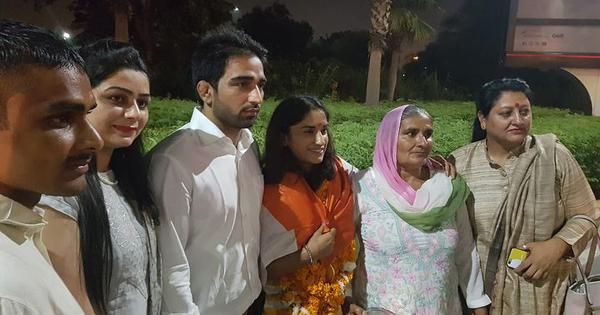 After Asian Games 2018 gold, Vinesh Phogat completed her engagement at the airport on her birthday!

For Indian athletes such as Saina Nehwal, Vinesh Phogat, and Deepika Kumari life stands for a lot more than a designer outfit or a grand wedding. They would allow themselves to cherish the festivities for a day or two and will then get back on their training regime. “How can I get the next medal for India,” is what excites them, way more than a big fat Indian wedding.