India has won a medal each in badminton at the last two Summer Olympic Games. We all are well-versed with the performances of the two greats of our time, Saina Nehwal and PV Sindhu, India's female pride who each brought an Olympic medal home and also multiple laurels for the country.

The biggest dream of any Indian athlete is to one day be a part of the Olympic contingent and shuttler Kuhoo Garg, who won the Mixed Doubles title at the Egypt International 2019 pairing with Dhruv Rawat, is preparing herself for her ultimate goal which is to represent the country in the 2024 Olympics.

The 22-year-old lass from Dehradun has also been the former India no.1 in mixed doubles.

Kuhoo also mentioned her father Ashok Kumar, a senior police officer of Indian Government, who inspired her at every moment of life. She is the current Senior National Championship silver medallist in Mixed Doubles event and bronze medallist in women's doubles. Kuhoo has also been the part of Premier Badminton League (PBL) based franchise Mumbai Rockets, playing consistently for the last three seasons.

While discussing her passion and determination for the sport, the 22-year old Kuhoo Garg deliberated more about her journey and goals in a free-wheeling exclusive conversation with The Bridge.

The Bridge: Tell us about your sporting journey as an Indian Shuttler so far. When did you turn professional?

Kuhoo Garg: Sports was something, I was always encouraged by my parents as an essential part of our lifestyle. I was involved in a lot of different activities - tennis, swimming, horse-riding, kathak, music and etc. As a kid, I used to go to the badminton court with my father who used to play in the evenings. I started playing badminton at the age of nine. We had a Senior Ranking All India Tournament being organised in our city (Dehradun) in 2007. Saina had come as a guest and meeting her inspired me to pursue badminton more seriously.

I first got selected in the Indian junior (U-19) team in 2013 for the Asian Junior Championships and later that year the World Junior Championship. Since then I have represented the country in U-17 and U-19 age groups in the Mixed doubles and Women Doubles category till 2016 after which I moved to the senior age group. In my juniors, I have won many All India titles and also the Belgian Junior International in 2014. Also a Bronze medal at the Senior National Championship in 2013 at the age of 15.

In the senior category, I qualified for the Asian Badminton Championships in 2018 in XD and WD and in 2019 in XD. I also represented the country at the World Championship 2018 in both XD and WD. Winning a silver (XD) and Bronze (WD) at the 2019 National Championships. Till date, my biggest achievement would be a Gold and Bronze medal at the South Asian Games in Nepal in 2019. The Bridge: What sort of struggles have you faced in your career? How did you come out of those situations?

Kuhoo Garg: My major struggle has been finding the right partners, coaches and getting sponsorships.

In 2018 I was ranked World number 34 in Mixed doubles with Rohan Kapoor. However, soon we decided to split as a pair. Finding a partner who can compliment you well on the court, technically, emotionally and physically is the difficult part. Even more difficult is starting at the world rankings from 0. However, the only way to face such a situation is to stay patient and positive and have belief in your own abilities.

Another struggle has been that of sponsors. Unfortunately in India, only the elite players are supported by the federation. Despite being ranked India no.1 and world no.34, I did not get much funding from the association. Apart from 3-4 out of 18 tournaments I played in 2018, I had to self fund myself for all of them, which is not an easy task. I was only able to do it through the sponsorship by Yonex (equipment sponsor) and the prize money earnt performing in those tournaments.

Also working with a trainer and coach with whom you are comfortable and whom you can trust to do the best planning for you is important. So this is something which over time having trained with different coaches and trainers I have finally found the ones I am most confident with. Somebody who is confident in me and my abilities as an athlete and who can help me identify my strengths and work on my individual weaknesses.

The Bridge: Who is your inspiration and why?

Kuhoo Garg: My father is my biggest inspiration. He comes from a very humble background and made it to IIT Delhi. From there he went on to become an IPS officer. Having achieved all this without any support really inspires me that anything is possible if you put your head and heart into it. Even now watching him work with so much dedication every single day and handling such an important and high post so well leaves me awestruck and proud.

The Bridge: When did you make your debut at International level?

Kuhoo Garg: My first exposure to international stars in person was at the 2010 Badminton Asia Championships in New Delhi where I was volunteering. I was so mesmerised by these players and was running around getting autographs and photographs with them, dreaming of playing at this level one day. Eight years later I qualified for my first Badminton Asia Championship, and this was a very special and proud moment for me.

The Bridge: Which of your skills make you apt for Badminton?

Kuhoo Garg: One of my strengths on the court is my speed and agility which especially helps me as a doubles player and even more as a net player. I also have good endurance. As of late, I have been working more on my technique, strength and stability.

The Bridge: What's your highest achievement in the journey till now, in which event and against whom?

Kuhoo Garg: I am the current (2019) Senior National Championship silver medallist in Mixed doubles and Bronze medallist in Women doubles.

As part of the Indian contingent, I have won the Women's team event Gold medal at the South Asian Games 2019 in Nepal and the individual Bronze medal in Women Doubles.

At the BWF World tour, I am the Silver Medallist in Mixed Doubles at the Russia Open World Tour Super 100 2018. Apart from this, I have won an International Challenge and three International Series tournaments across WD and XD.

Vishal Sharma: What’s your current ranking and highest ranking in India and the World?

Kuhoo Garg: Currently, I do not have a very good world ranking due to recent changes in the partnership which I mentioned earlier. The BWF rankings are according to a pair and therefore every time you play with a new partner you have to build a new rank from 0. With my new partners, I played only three-four tournaments before we were hit by the coronavirus. But my highest rank would be No. 34 in Mixed Doubles and No. 73 in Women Doubles at the end of 2018.

Similarly, I haven't played too much at the domestic circuit in this past year as I was focusing on finding the right partnerships and then on internationals which is why my current ranks have slipped. However, in 2018, I was ranked India no. 1 in Mixed doubles and no. 4 in Women Doubles.

The Bridge: What's your training methodology during Covid-19? How are you coping with it? Do you have a personal trainer?

Kuhoo Garg: With the new relaxations, we have had access to our local badminton court for some time now. So I have been doing two-hour long on-court sessions in the morning. Besides, I have training equipment including weights and balance boards, etc. at home which have helped me continue my physical training during the lockdown.

I have looked at this period as a long off-season break and used it to work on my weaknesses and also on my fitness. I work with my trainer Mr Bhaskar Bora, who plans for me on a daily, weekly and monthly basis. I have stayed in close contact with him throughout this period and we have used it as best as possible to work on my problem areas.

Also, it gave me an opportunity to spend time with my family after almost 6-7 years of extensive travelling and training at the National Centre in Hyderabad, something I have really enjoyed. I have had the chance to explore my other hobbies like painting, baking etc. I have also used this time to think and plan for my future and for life after badminton. Overall I have coped with it pretty well.

The Bridge: You have been playing with the Mumbai Rockets for the last 3 seasons. How has the experience been?

Kuhoo Garg: PBL is a great experience for young players like me. Being a part of the Mumbai Rockets I got to closely interact with some really great players including the doubles legend Lee Yong Dae from Korea who is 2008 Olympic Gold medallist. He is probably one of the players with the best techniques and had so much to teach. Not just on court, but even off court. The way they prepare for matches, their attitude while interacting with teammates and while training. There's a lot to learn.

I also made some pretty close friends amongst the foreign players during PBL like Gabi Stoeva, Beiwen Zhang and Anders Antonsen. It is definitely a big exposure as we get to spend so much time with the Big league players and this motivates us immensely. 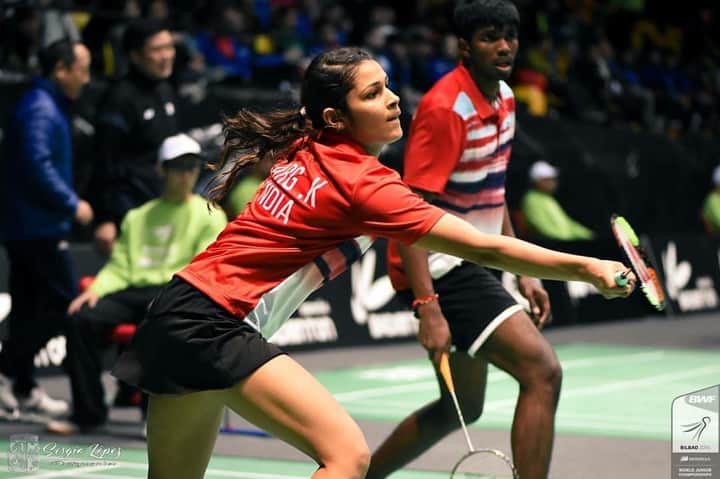 The Bridge: Who was your toughest opponent in the doubles journey ever or I say the most difficult win so far?

Kuhoo Garg: First would be at the XD semi-final of the Russia open 2018. We were playing against a Malaysian pair and ended up winning an extremely close match with the score of 22-20 in the deciding set despite trailing towards the end. It is probably one of my biggest victories till date.

Another is the XD final of the Iceland International in 2018. We played against a Danish pair and won another close match with 21-17 in the decider. What made this one special was that we had lost to the same pair just a week prior in the semi-finals of the Swedish International. The loss had made us hungry for revenge and going into the match we studied our opponent's game and built strategies with our coach back in India at length. There was a lot of preparation going into this final and we were very happy to convert it into a win.

The Bridge: Which equipment do you use as of now?

Kuhoo Garg: I have been sponsored by Yonex for the past five-six years for my equipment and apparel. Currently, I am using the racket

The Bridge: Who is your most favourite shuttler of all time?

Kuhoo Garg: Lin Dan. I fell in love with him the first time I saw him play in 2010 at Badminton Asia Championships in New Delhi. The way he seemed to effortlessly cover the court had me in awe.

More recently after having spent time with Lee Yong Dae for 2 consecutive seasons in PBL, I have come to admire him a lot. Not just for his skill on the court, but also his humble and helping nature off the court.

The Bridge: What's your next big goal towards your career? Aim for the Olympics?

Kuhoo Garg: The first goal for me would be to try and qualify for the World and Asian Championships next year with my new partners. After that, I would be looking at 2022 Commonwealth and Asian Games and would target breaking into World top 20-25. And definitely, the Olympics 2024 is the ultimate dream.