Nehwal is to Women's badminton in India what Serena Williams, at 38, who is the indisputable GOAT in Women's tennis comes to still stand for. 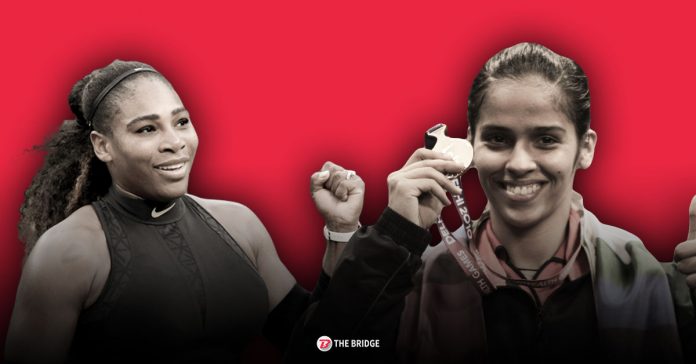 It’s not an easy task being a star sportsman who has to perpetually hog the limelight with the critics ready with their pens to scribble and scrutinise the slightest of falters in form. The fingers are quick to jab and point whenever a slip takes place and is faster to judge than amply celebrate. With her form being unreliable at the moment, India’s star badminton player, Saina Nehwal has been the topic of much discussion ever since her chances to qualify for the Tokyo 2020 Olympics have begun to slacken as she has failed to deliver in crucial moments.

Dropping in the rankings list to World No. 18, Nehwal is hoping for a turnaround in her luck sector with the days closing in for the Tokyo qualifying tournaments. The three-time Olympian and a bronze medalist too, Nehwal, even at 29 remains an inspiration for many. Her consistency has been admirable with no drastic drops perceived over the last decade, which in itself is a magnificent feat. While most veteran and contemporary players like Tine Baun, Julian Schenk, Wang Shixian, Li Xuerui have bid their farewell to the courts and hung up their boots, Saina Nehwal still wields her racket firmly and when the occasion will come, she too, like dust, will rise.

The halo that emanated from the former World Number 1 has seemingly lost its radiance over the past year of 2019 leading to several conjectures about Saina’s supremacy as the golden girl of badminton. Truth be told, it has been a pretty lacklustre outing for the Haryanvi ace shuttler who took the badminton world by storm when she broke out into the scene in 2006 and became the first person to claim the Asian Satellite Badminton Tournament twice and also the youngest Asian to win the Philippines Open, which is a 4-star category event when she was all of 16 years. There has been no looking back for the Hisar-born Nehwal after that, as she remained on track to become one of the most successful shuttlers of Indian badminton and probably, the one responsible for escalating the popularity of the sport in a cricket-obsessed nation.

At 29, Saina can look back at her illustrious career and give herself a pat on the back for there is only little that the former World No. 1 has left to achieve now. The slump in the form, the early exits and poor defence in a motley string of events have all been glaring markers of the fact that the usual Saina is missing in action. But we need to pause here and take a few things into perspective to stumble on the impending epiphany waiting to happen to us. If there was an analogy to be made here, then it would quite transparently appear so that Nehwal is to Women’s badminton in India what Serena Williams, at 38, who is the indisputable GOAT in Women’s tennis comes to still stand for.

According to the latest BWF rankings, Saina Nehwal has slid down the ladder from her World No. 1 perch to World No. 18 currently. Serena Williams, the 23-times Grand Slam Champion also suffers from a similar fate after losing her top rank due to her maternity leave absence. The comeback Queen, however, has already been into four Grand Slam finals and only recently, lifted the Auckland Open title before heading to the Australian Open as the eighth seed to claim her elusive 24th Grand Slam and level with the great Margaret Court.

Nehwal, with the years growing on her, is also doing well in the circuit of the fastest racket sport, given how she has been wonderfully consistent – not dropping out of the Top 16 for over a decade now. There are several other facts to the credit of the first Olympic medalist in Indian badminton, as only two other players – the 50th-ranked Hong Kong’s Yip Pui In(32 years) is the only one player who is older than Nehwal and Belgium’s Lianne Tan(29 years) who is the World No. 44 is few months younger – are in the Top 50 of the BWF rankings chart.

Nehwal’s feats have been no less impressive as the bronze medalist at the 2012 London Olympics, has collected countless laurels across the badminton circuit, earning honours from every BWF tournament which includes the rare haul of 11 Superseries titles aided by 13 other major titles lifted over her expansive career. In 2018, Saina was still enjoying an effortlessly excellent form that is typical of her when she bagged the gold medal in Women’s Singles at the Gold Coast Commonwealth Games. In the Jakarta-Palembang Asian Games, Nehwal had also picked up a bronze medal. There are records galore that are assigned to Nehwal’s name and the Champion player still possesses an incredible talent that when tapped into, can mean definite trouble for the opponent on the given day.

Not just on the court, Saina is quite the philanthropist and has made her presence felt like a role model for future badminton players and sporting enthusiasts. She has been one of the leading reasons behind badminton getting recognition as a somewhat ‘mainstream’ sport in India. Before her, India never had a woman player this successful in whichever tournament she played. She has been the icon that badminton came to be associated with for more than a decade now.

It would be silly to write her off just as yet as like Serena, she too is a powerhouse player, ready to erupt and take charge of the most unlikely of situations. The slump in the form may be a tad disappointing as is the lowly World No. 16 ranking to her name but it’s important to remember Nehwal’s consistency over the years and maintaining her form regardless of her growing age. Saina still has a lot of badminton left in her and it would be premature to conclude her story just as yet.

The fitness industry relies on people participating in a healthy diet and exercise regimen which has given rise to many careers as trainers, nutritionists...
Read more
131,607FansLike
12,374FollowersFollow
7,213FollowersFollow The Bridge Desk - Modified date: July 6, 2020
While the I-League is set to undergo the change in foriegn policy from the upcoming season itself, the top flight of Indian football, the Indian Super League (ISL) will witness the reduction of foreigners from the 2021-22 season. Clubs will be allowed to sign...
Read more