With the 2020 Tokyo Olympics scheduled to kick off in July next year, India’s primary medal hopefuls have less than a year to prepare themselves for the showpiece event. As has been the norm for the past few editions, shooting, wrestling, boxing and badminton are going to be India’s best bets for raking up a respectable medal haul in Tokyo as well.

The Indian Olympic Association and Sports Authority of India had confidently asserted hopes of landing 15-20 medals during the Rio games in 2016. But that turned out to be an insipid daydream as India managed just two, owing to the individual brilliance of PV Sindhu and Sakshi Malik. This time too, the powers that be have predicted 14 medals from the Tokyo games, with the wrestling (4) and shooting (5) federations alone accounting for 9 of them. Knowing the level that they would have to compete at in the Olympics, that number might still just be an asinine idea with 8-10 medals overall being a more realistic ambition.

However, we at The Bridge have decided to adopt a more pragmatic approach and train our eyes on future stars who, if nurtured carefully, can actually bring India Olympic glory. Although the Tokyo Games might be a little too soon for some of them, the games in Paris three years later can potentially be the perfect springboard for some of these talented athletes. 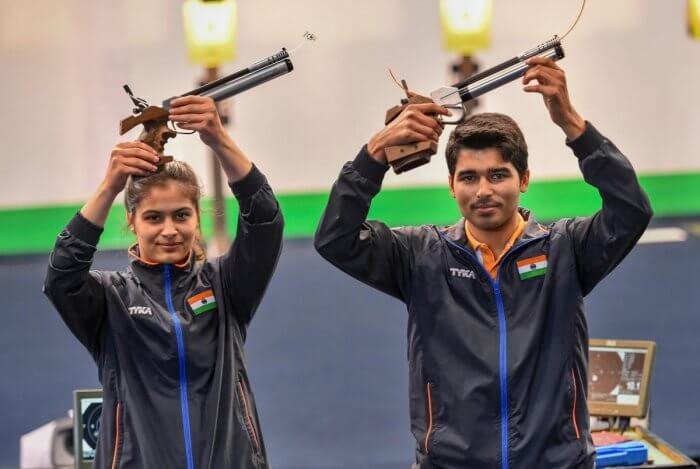 One of the biggest draws in the country’s push for Olympic ecstasy, shooting is probably one sport where India is well stocked for the foreseeable future with a number of talented marksmen. The 2018 World Junior Championships in Changwon, South Korea saw a young Indian contingent perform massively well in almost every category and win 9 gold, 5 silver and 6 bronze medals.

Another discipline which holds a lot of promise are the track and field events. From Anju Bobby George to Tintu Lukka and Lalita Babar to now Neeraj Chopra and Jinson Johnson, India has always had capable athletes who have worn the tricolour in important competitions and done well, without ever getting the adulation and reverence they deserved. That was until a young Hima Das burst onto the scene in 2018 at the World U20 Championships in Tampere and won the 400m gold. The Dhing Express, as she is lovingly called, is yet to qualify for the Tokyo games but experts, including her mentor Nabajit Malakar, believe that she will be at her physical best during Paris 2024.

Another youngster who deserves a mention in this list is young hammer-thrower Damneet Singh from Barnala in Punjab who won the silver in U18 World Athletics Championship in 2017 in Nairobi. The now-20 year old who hails from a family of athletes, his father being a national level pole-vaulter, is definitely one to look out for. Although India has almost always had a talented ensemble of professional wrestlers at international events, it was only until Sushil Kumar won the bronze at the 2008 Beijing Olympics that the world took notice. He, Yogeshwar Dutt, who also won bronze at London 2012, and Rio Olympics bronze medallist Sakshi Malik have paved the way for youngsters like Sonam Malik and now Deepak Punia to carry on the legacy. 21-year-old Punia won gold in the 86kg category at the World Junior Championships in 2019 while Viky Chahar won bronze in the 92kg category. Lastly, Sajan Bhanwal became the first Indian wrestler to win back to back medals in the same competition when he won bronze in 2019 to add to the silver medal that he won in 2018, both in the 77kg Greco-Roman category.

Saina Nehwal, Kidambi Srikanth and PV Sindhu have done a lot to put Indian badminton in the world map. However, India’s golden generation’s most important contribution might just be inspiring the next batch of elite shuttlers who have gained increased exposure with some brilliant performances. The most prominent out of all of them is Lakshya Sen. The 19 year old won bronze at the 2018 Junior Championships, has since gone on to register five titles in the senior circuit and is looking to break into the top 15 in the world.

India has been longing for an Olympic medal in weightlifting since Karnam Malleswari last won a bronze medal at Sydney 2000. Whether that wait will be over next year is up for debate but what India do have at their disposal is a couple of extremely talented lifters in the form of Jhilli Dalabehra, who won bronze (48kg) at the 2018 Junior Championships and Jeremy Lalrinnunga, who won silver at the same event in 2017 but in the 56kg category.

India’s sense of lost pride in a sport that they not too long ago excelled in, might just be on the mend if recent performances of the U21 teams are to be considered. If the gold medal at the Junior World Cup in 2016 was promising, the silver at the Sultan of Johor Cup in 2019 shows signs of real progress after nearly two decades of stagnation.

Moving on from veteran archers like the sibling duo of Dola and Rahul Banerjee, India can have high hopes from two very promising youngsters in Komalika Bari and Muskan Kirar. While the former won gold at the 2019 Youth Championships, the latter won gold in the women’s compound final at the Archery Asia Cup 2018.

17-year-old cycling prodigy from the Andaman Islands, Esow Alben made history in 2018 when he won silver at the UCI Junior Track Cycling Championships in Switzerland in men’s keirin. He followed that up with three other medals in the 2019 edition in Germany, with an individual sprint silver, a bronze in keirin and a team sprint gold alongside Rojit Singh Yanglem, Ronaldo Singh Laitonjam and Jemsh Singh Keithellakpam.