India’s para badminton stalwart Manasi Joshi has been featured on the world-reputed Time magazine's list of Next Generation Leaders 2020. According to the magazine, the list includes only 10 people - "trailblazers who are forging new paths, crossing boundaries and creating change".

It’s been six years since TIME first partnered with Rolex to launch the Next Generation Leaders project, and they have selected the rising stars around the globe in politics, business, culture, science and sports. Previous honorees have gone on to lead nations, receive Oscar nominations and become Olympic stars.

"Manasi Joshi never set out to become an international athlete. And she certainly didn’t plan to become an advocate for disability rights in her native India.

But in 2011, a road crash cost Joshi her left leg, pulling her from her path as a software engineer in Mumbai and launching her on a different, more meaningful journey. She is now working to qualify to represent India at badminton in next summer’s Tokyo Paralympic Games. She is also rapidly becoming a prominent campaigner for the tens of millions of people with disabilities in India.

“Sports helped me break stereotypes,” Joshi says. “I now want to use that experience to be an enabler for others.” 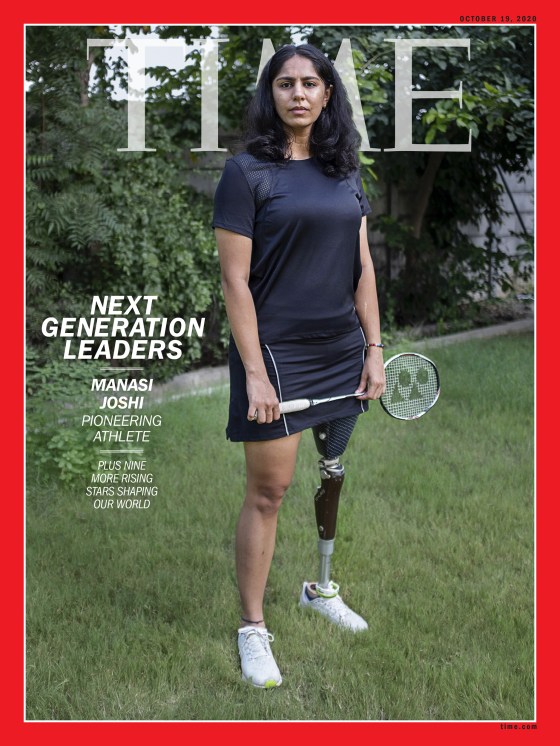 Photograph by Kannagi Khanna for TIME

Joshi was 22 and fresh out of college when her motorcycle was hit by a truck on her way to work. Her left leg was badly injured, and doctors were forced to amputate it above her knee. After she learned to walk again using her new prosthetic leg, a process that took four months, she turned to her favorite childhood sport, badminton, to help her body regain its balance. But it did much more than that. “It taught me to do my best with whatever I have,” she says.

Joshi’s accidental sports career started two years later, when a friend pushed her to try out for the national para badminton team. What followed was a whirlwind of national and international medals. In August 2019, she won gold in Switzerland at the BWF Para-Badminton World Championship, one of the world’s biggest badminton tournaments. Her achievement was initially overshadowed by the victory of a prominent non-disabled Indian badminton player. But days later, social media—noticing the lack of coverage of her victory—heaped praise on Joshi.

She returned from Switzerland a celebrity, and started getting recognized on the street. When a young amputee called her a role model, she realized she felt a responsibility beyond her sports career.

Even before her 2019 victory, Joshi had been vocal in urging the Indian government to waive taxes on prostheses and other disability aids. But her new popularity has helped amplify the issue. More than 26 million people live with some form of disability in the country. Although the country has made progress in recent years, attitudes toward people with disabilities remain a major hurdle.

Joshi and disability campaigners hope a strong showing at Tokyo’s Paralympics next summer could help change perceptions about disability in India. But ultimately, she believes her success in badminton, one of the most popular sports in India, will inspire people to find opportunity in adversity. “Because when I did that,” she says, “it helped me break barriers and set me free.”