Saina Nehwal, started the year 2019 on a positive note. She lost in the semi-finals of Malaysia Masters 2019, but she did not let her game go down and emerged victorious in Indonesia Master’s 2019.

Saina started off slowly but as the tournament progressed, she showed her flawless game. In every game, there were certain areas where she was lacking but she overcame those hurdles effortlessly to win the title.

The game wise analysis gives us more insight about the changes that Saina made in her game to win the tournament. 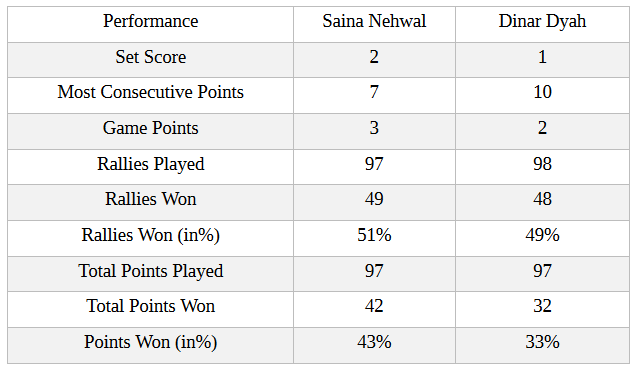 Saina’s round 1 encounter was with Dinar Dyah of Indonesia. The game was quite competitive for Indian baddie as she dropped her 1st set. Later, she won the two consecutive sets to qualify for 2nd round.

In this match, the Indonesian baddie was able to capitalize more on consecutive points against Saina. In the rallies both were neck to neck in terms of competition.

Saina (51%) and Dyah (49%) in terms of winning rallies. But the major difference between the two players was total points winning %. Saina won 43% of the points whereas Dyah won only 33%. This was main advantageous part for Saina to take her through the next round. 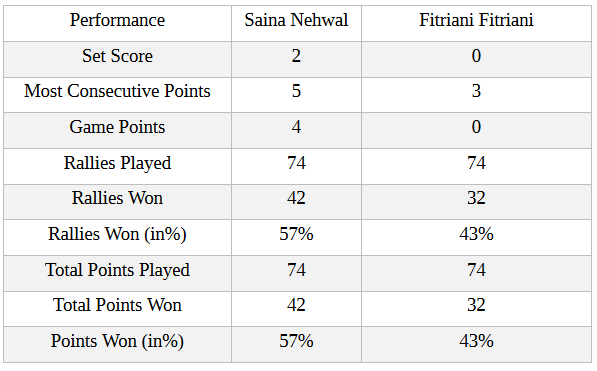 In the 2nd round, Saina came out with almost her perfect match of the tournament. She took on Fitriani and won the match in straight sets.

The main feature of this victory was her ability to win rally points which she failed to get in the 1st round. She outclassed her opponent in terms of game points and also won more consecutive points. In the quarterfinals, Saina came up with another clinical performance against Thailand’s Pornpawee Chochuwong.

Saina strengthened her game from her last game by winning the match with more rally points. She won 42 out of 67 whereas her opponent was able to cash in only 25 out of 67.

Another important feature of this victory was Saina captured 3 game points. Two back to back wins with such a firm solidity in her game meant a tough semi-final match for the opponent. The semi-final clash was against China’s HE Bingjiao was a testing match. After 1st round match, Saina loses her 1st set in the semi-final.

She bounced back well to win the match and setup the finals against Olympic gold medallist Carolina Marin. The semi-final was concluded after 58 minutes of intense game. This was the longest match for her in terms of time on court. The finals against Carolina Marin was expected to test the game and strategies of Saina. The Spaniard was clinical with her performance right from her 1st point win.

She stretched Saina at all parts of the court and was very good with her finishing. Saina failed to capitalize on her rallies. She got 29% chance to capitalize against Marin.

Unfortunately, Marin got injured after leading the match 10-4. She could not continue the match which eventually entitled Saina Nehwal as champion of Indonesia Masters 2019.

But, Saina was struggling with her performance in the finals and she will definitely look into her entire tournament performance. This tournament will be a big boost for her to develop the game and win more tournaments in future.
badminton Indonesia Masters Saina Nehwal
Latest Videos
Next Story
Similar Posts
X
X