Saina Nehwal’s woeful 2019 continued as the former world number 1 crashed out of the first round in the China Open after losing the game in straight sets to local player Cai Yan Yan. The Olympic bronze medalist went down 9-21, 12-21 in the clash that lasted just 24 minutes to follow PV Sindhu, who had also lost in her opener earlier.

The 29-year old shuttler has been going through a rough phase with regards to both form and fitness ever since winning the Indonesia Masters in January earlier this year. She was ousted in the first round of three successive events before she broke the streak by reaching the quarters of the French Open last month.

The day was a mixed one for the other Indians in the fray, as Sameer Verma, the duo of Manu Attri and Sumeeth Reddy and the mixed doubles pair of Pranav Chopra and Sikki Reddy also lost their respective encounters. Parupalli Kashyap and Sai Praneeth, however, added some cheer to what has been a dismal campaign thus far by winning their encounters to qualify for the next round.

The mixed doubles duo of Chopra and Sikki Reddy also made an early exit as they lost 14-21, 14-21 to Wang Chi Lin and Cheng Chi Yan of Chinese Taipei.

It was only Kashyap and Praneeth who kept India’s hopes alive, as they pitched in with a clinical show to advance to the next round. While the former outsmarted the Thai player Sitthikom Thammasinn 21-14, 21-13 in 43 minutes, Praneeth beat Tommy Sugiarto of Indonesia 15-21, 21-12, 21-10 in a hard-fought game that lasted 52 minutes. The world number 11 will now face fourth seed Anders Antonsen of Denmark in round 2, while Kashyap faces Denmark’s Victor Axelson, the seventh seed.

On Tuesday, Sindhu crashed out of the first round after losing to lower-ranked Pai Yu Po of Taiwan. She is also in the midst of a woeful run, having lost in the early stages of the Korea and Denmark Opens recently. Pai is currently ranked number 42 in the world.

In the men’s singles, HS Prannoy, after recuperating from a bout of dengue, too had crashed out on Tuesday as he lost 17-21, 18-21 to Rasmus Gemke of Denmark. 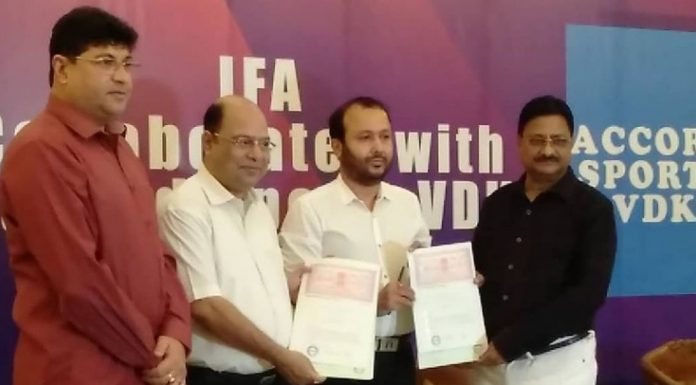 Press Trust of India - Modified date: September 17, 2020
In a big boost for the Indian Football Association (IFA), the governing body of the sport in Bengal has inked a four-year deal with "Accord Sports VDK" as its commercial partner. As per the deal, IFA will get Rs 14 crore from the advertising...
Read more