This will be the seventh time Parmer is playing a women’s singles final in 2019 and her fourth in the World Championships. The three-time World Champion will face compatriot Manasi Joshi, 2017 Worlds bronze medallist, in the final.

Speaking to Paralympic Committee of India, India coach Gaurav Khanna was happy that it will be an Indian affair, and said: “It’s not one-time story that Parul will face Manasi. I wish both good lucks. Parul is quite experienced while Manasi is young and this will a great experience for her.”

Khanna also praised his senior player Parmer’s “strong willpower and determination” and hoped that the “the undisputed journey of her will continue.”

It was a double delight for two-time world champion Tarun Dhillon entering into the final of the men’s singles and doubles SL4 events, interestingly beating his Indonesian nemesis Fredy Setiawan in both the events. In the singles, he survived a scare from Setiawan before winning 21-14, 21-16 in 28 minutes.

However, Sukant Kadam and Krishna Nagar had to settle with bronze after crashing out of the championships. Both faltered at the hands of top seeds. While Kadam fell against France’s top seed Lucas Mazur 11-21, 13-21 in men’s singles SL4, Nagar was ousted by his British nemesis Jack Shephard 13-21, 13-21 in SS6 competition in 29 minutes.

Tarun will face his nemesis Mazur in the final. The Indian will hope to avenge 2017 Worlds defeat to the Frenchman. However, coach Khanna added: “It will be a tough match. And Tarun will have to come up with a different strategy than the one he had when he beat Lucas in 2015. But Tarun has also improved in his skills and game.”

Much like the women’s final, the men’s doubles SL3-4 final will be an all-India affair as Tarun and Nitesh Kumar face Pramod Bhagat and Manoj Sarkar.

Nitesh-Tarun came out with a brilliant show to shock the Indonesian experienced duo of Raekendi and Hary Susanto 23-21, 21-9 in the semi-finals, while Bhagat-Sarkar saw off the Indo-Thai pair of Umesh Vikram Kumar and Chawarat Kitichokwattana 21-15, 21-15.

Later in the day, India’s men’s singles stars World No. 1 Bhagat will fight it out against his doubles partner and former silver medallist Sarkar for a spot in the men’s singles SL3 finals.

As many as 22 medal events are contested in this Championships, while the Tokyo 2020 will have 14 medal events in the sport that will make its Paralympic debut next September. 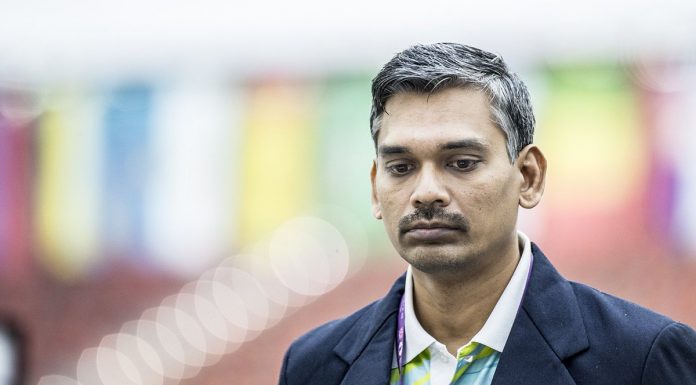 Press Trust of India - Modified date: July 8, 2020
Grandmaster RB Ramesh has on Tuesday resigned from the post of chief selector of the All India Chess Federation (AICF) alleging "interference" from warring officials of rival factions. Ramesh, a former Commonwealth Chess champion said he found it difficult to continue in the post...
Read more