Badminton: Can Tai Tzu-ying undo the jinx to win a maiden Olympic medal?

Planning to retire soon, World No. 1 Tai Tzu-ying's quest for a maiden Olympic medal is a now or never situation.

It's quite strange, if not jarring, to see how Chinese Taipei's Tai Tzu-ying, a player who holds the record for being the World No. 1 for 148 weeks straight has not a single Olympic medal nor a World Championship crown to her name. Arguably one of the best players in recent badminton history, Tai Tzu-ying's unpredictable strokes, her heavy smashes guided by nimble footwork and deceptive shot-making skills have helped her consolidate her position at the helm of the BWF rankings.

Not a stranger to success despite the two major achievements cruelly lacking from her collection, Tai Tzu-ying has been a 3-time All England Champion and a 2018 Asian Games gold medallist. To the 26-year-old Taiwanese shuttler's credit lies a whopping 26 BWF singles trophies - 12 of which belong to BWF Super Series titles, 11 BWF World Tour Singles titles and finally, Tai has ended the year as the champion thrice and has 3 BWF World Tour Finals.

Despite this impressive haul, the reigning World No. 1 player has experienced particular ill-luck at the biggest stages of the sport - the World Championships and the Olympics. Time and again, Tai has tried to claw into the deeper stages of the tournament and time and again, the Kaohsiung-born ace shuttler has failed.

Can Tai Tzu Ying undo her medal jinx in Tokyo?

At the World Championships, apart from a first round exit on her debut appearance in 2011, the small-framed 5ft4" shuttler has crashed out every time in the quarters spanning from 2013 to 2019. The Olympics tell a story of similar misery as Tai Tzu-ying's medal hopes have been heavily disrupted on the two occasions she partook in the quadrennial Games - first, at London in 2012 and secondly, at Rio in 2016. Suffering a sore defeat to Finland's Anu Niemenen (21-11, 21-14) at London in the third round, Tai's jinxed luck continued at Rio as well when she was handed a defeat by India's PV Sindhu. Tai went down fighting against one of her most formidable opponents, 13-21, 15-21, in a matter of 41 minutes. Her Olympic journey staggered at the Round of 16 stage and progressed no more.

Tai, who has hinted at hanging up her racquet post the Tokyo Olympics is definitely eyeing to score big on her one last outing at the Games.

Speaking to a Malaysian portal The Star, Tai had said, "My badminton career will be complete if I can win a medal at the Olympics but whether I win a medal or not, I'll still retire. I've given my all to badminton for 10 years and that is enough for me. I've to run on the court more than most players to cover my weaknesses because of my small size, so I think it's enough."

Given her raging form and her position as World No. 1 on the rankings and No. 2 in the Race to Tokyo roster, Tai Tzu's streak in 2021 itself has been notable. The 26-year-old won the World Tour Finals and finished as a runner-up at the Yonex Thailand Open and the Toyota Thailand Open, losing on both occasions to Spain's Carolina Marin.

However, with the reigning Olympic champion, Carolina Marin out of the picture, Tai's chances at the Olympics have considerably improved. For a deserving athlete as she is, an undoing of the jinx would only bring poetic justice to her career, should she choose to hang up her boots post Tokyo. Also Read:Saina Nehwal vs PV Sindhu: Who is the better shuttler on paper? 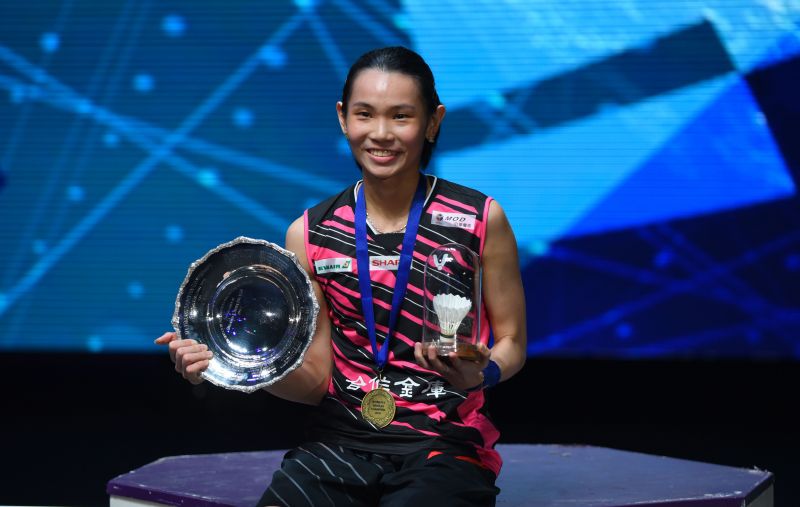 It's strange how being the best cannot guarantee you everything and especially in the gambit of sports, it's a painstaking truth. Every victory is hard-earned, there are no shortcuts and yes, luck and chance do play a quietly decisive role in the fate of every tournament and how the podium will look like, at the end of it. While Chinese Taipei has developed itself as one of the powerhouse nations of badminton by producing the likes of World No. 1 Tai Tzu Ying, World No. 4 Chou Tien Chen, World No. 10 Wang Tzu Wei and the World No. 3 doubles duo of Lee Yang - Wang Chi-Lin, it still stops short somewhere. None of the players have been able to clinch a medal for the nation at the Olympics and this fact sticks out like a sore thumb, on most occasions.

Missing the elusive Olympic medal from their impressive collection, Chinese Taipei is yet to adorn itself in any of the medallic hues. The 2020 Tokyo Olympics will once again put the focus on these star shuttlers, especially on Tai Tzu as she bids for a maiden medal on what could probably be her last outing at the quadrennial Games. Whether the jinx will be lifted or the barren spell will continue will only be revealed in a matter of time.