Shattering the record of Maan Kaur, 105-year-old Rambai from Haryana made history by clocking a time of 45.40s to win at the National Open Masters Athletics Championships.

Perhaps the trope 'Age is just a number' needed some re-stressing because a 105-year-old woman from Haryana has just set an incredible record by becoming the oldest (we'd like to say, youngest) one to win a gold medal by sprinting in a 100m race in just 45.40 seconds at the National Open Masters Athletics Championships in Vadodara, Gujarat. Take that for your fitness inspiration!

All of 105 and wonderfully young at heart and body (she has medals to show for it!), Haryana's Rambai has been travelling from one place to another, driven around her her doting granddaughter, Sharmila Sangwan, who draws immense inspiration from her Super Naani. She made her running debut in Varanasi last year in November and ever since has collected a lot of medals from events in Maharashtra, Karnataka, Kerala.

At the Vadodara event that concluded on Sunday, Rambai was the lone participant in the race meant for those above 85 and she made a dash for it - winning not just one medals by participating in the 100m on June 15th and 200m on Sunday, finishing that in 1 minute 52.17 seconds. Not only that, with a 45.40 seconds finish in the 100m, Rambai broke the record of 101-year-old Maan Kaur who ran the 100m in 74 seconds and won gold at the World Masters.

At 105 years, super grandma sprints new 100m record. #Rambai ran alone in #Vadodara as there was no competitor above 85 competing at the National Open Masters Athletics Championship pic.twitter.com/iCIPTOkuFt

Energised further by these victories, Rambai wants to compete more and not just domestically anymore but rather, she is making plans of getting her passport ready and she is set to show off her fitness level - all the secret of buffalo milk and ghee that she consumes religiously - to the whole world! Super Naani is very particular about this diet and consumes 250gm of ghee and 500gm of curd daily and loves her share of churma too. 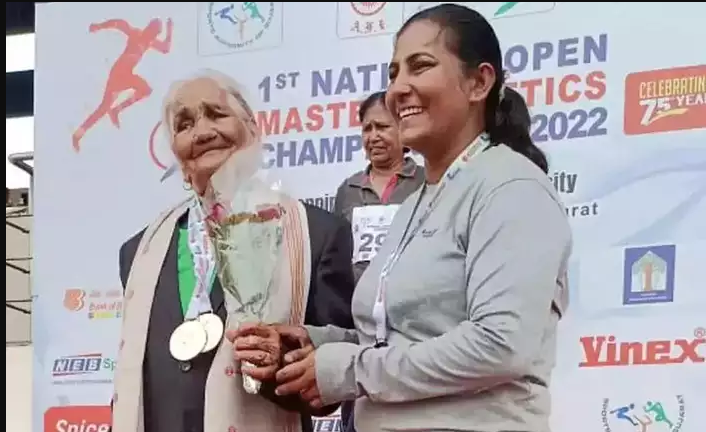 Asked why she did not compete in races earlier, Rambai chirped to TOI, "I was always ready, but nobody gave me an opportunity before this!", showing just how there is no one right age to do something. Hailing from the village of Kadma, located 150km away from New Delhi, Rambai's experience with running stems from dashing around in the fields of her village - and now as she becomes more of a proper athlete, she also looks the part wearing track pants and running shoes as well.

Entering in the above-100 category, the 1917-born Rambai was the lone competitor in her discipline and clinched the golden honours and broke a record. Having witnessed two World War's, the Partition of India and now living through a pandemic - Rambai is nothing short of a living legend who knows how to live life to the fullest, literally and never says no to all things sporty!