PD Chaugule – The First Indian at the Olympics

There has always been a lot of debate surrounding Norman Pritchard being the first Indian at the Olympics. Though many consider the double silver medallist during the 1900 Paris Games to be the first athlete to represent India at the Olympics, but was it really the case?

A journal published by the International Society of Olympic Historians in the year 2000 reads, “To say that Norman Pritchard represented India is just another example of an error being perpetuated from one book to another, a situation which is all too common in Olympic history.”

So, if not Norman Pritchard, then who was the first Indian at the Olympics is a very frequently asked question in Indian sporting circles. Well, according to many the answer to this question is Phadeppa Dareppa Chaugule.

PD Chaugule was a marathon runner and was one of the six athletes to have been the part of Indian contingent for their first ever Olympics during the 1920 Antwerp Games. Participating in the Games, Chaugule finished a credible 19th with a timing of 2:50:45.

Chaugule is said to have been born somewhere in the early 1900s in the Shahpur village in Belgaum which then fell under the Bombay Presidency. He received his education in Marathi and was an avid wrestler before an injury to his arm forced him to switch to running. Legend has it that Chaugule’s daily routine included 2000 push-ups and 2000 sit-ups along with bare-foot running of around 56 kilometers. He used to compete in races including 1km, 10km, marathon and cross country bare-foot and emerge victorious.

It was an annual sports event held by the Deccan Gymkhana of Pune in 1919 which changed the life of PD Chaugule forever. Competing in a marathon there, Chaugule managed to impress Dorabji Tata who went on to form the Indian squad for the 1920 Olympics and included him as part of the team for the marathon at Antwerp. Chaugule is said to have trained in London along with the five other members of the squad for the Olympics, all of which was sponsored by Dorabji Tata.

The Olympics, though, wasn’t easy by any means for Chaugule as he faced extreme racism while competing from fans and other athletes alike, who couldn’t digest the fact that a brown man was performing as good as any white man. Before the marathon, he even participated in the 10,000m qualifying heat and was running comfortably before a spectator shot at him with a pistol. Though, bullet missed Chaugule by a whisker, he had to forfeit the race due to the fear for life!

Chaugule somehow managed to gather courage and participated in the marathon just three days after this incident. The situation was no different this time around as the spectators threw soda cans at him while he was competing. None of this deterred him as he continued with his job and finished the rain-hit marathon at 19th spot. People close to Chaugule believe that he would have finished the race a lot better if he was allowed to compete bare-foot. He was running in his usual rhythm in the marathon and was on course to a famous finish, before it started drizzling which forced him to slow down. This led to water entering his shoes and made his life even more difficult. With shoe bites in his feet and shoes filled with water, Chaugule somehow managed to finish the race at 2 hours 50 minutes and 45 seconds.

Chaugule was nicknamed named, “Pavananjaya” – The conqueror of wind by the people of Belgaum and he famously used to say, “When I run, I feel like I am flying.” He was even recognised as the best in India by the British Government back then. 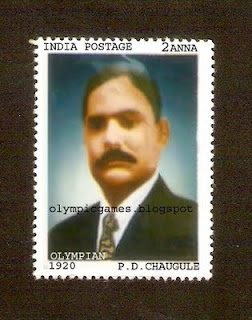 Though, a postal cover was released in Chaugle’s name in 2003 and a local cricket tournament is organised with his name in Belgaum, there has been not much recognition for him. In fact, his family continues to live at his house named Pavananjaya and continues to fight for his rights.

The Indian Olympic Association still considers Norman Pritchard as India’s first Olympian – probably because of his two silver medals, but with each passing day PD Chaugule keeps slipping deeper and deeper into oblivion.