OP Jaisha is juggling between the gargantuan task of training youngsters as SAI Assistant Coach as well as putting herself through her training drills. 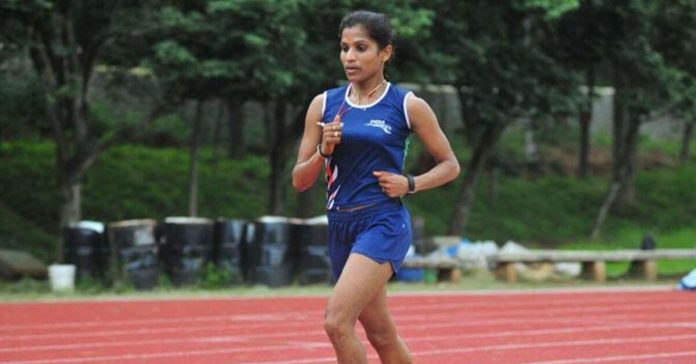 It’s around four in the afternoon. The Sports Authority of India (SAI), Bengaluru centre is a beehive of activity with young trainees going through their paces under the watchful eyes of a coach, who is an active athlete herself. Meet India’s much-revered long-distance runner and marathoner Orchatteri Puthiyaveetil Jaisha – better known as OP Jaisha. The 35-year-old Kerala lady is juggling between the gargantuan task of training youngsters as SAI Assistant Coach as well as putting herself through her training drills even as she lines up plans to stage a comeback at the competitive international athletic arena.

Jaisha’s last international appearance was at the 2016 Rio Olympics, where she had finished 89th among 133 participants in the women’s 42km marathon event. The former Indian Railway employee is determined to stay in contention for the 2020 Tokyo Olympics and beyond. “I know, training youngsters and focus on my personal training is a tough proposition. At times, the excitement of training youngsters at SAI makes me forget that I am an athlete who is still aspiring to represent the country in big-ticket events. I’m not putting any pressure on myself and only looking at easing into my comeback plans,” says Jaisha, exuding a feeling of contentment of training youngsters – something she always desired.

The experienced Indian athlete was keen to land a job in SAI, Kerala so that she can churn out more running champions from her home state, but was greeted with frustration all around. She candidly says:

There is a glint in Jaisha’s eyes when the conversation veers towards some of her trainees being serious medal prospects for major events. In fact, two of her students – Rakshita and Venkatesh (both 1500 metres) have qualified for the 2020 Tokyo Summer Paralympics. “Both are very talented and I have high medal hopes from them. I’m upbeat about a few more students qualifying for the 2020 Tokyo Summer Paralympics,” she gushes.

On the comeback front, it will not be a piece of cake for Jaisha as there is fierce competition in long-distance running space as she will have to contend with the likes of PU Chitra, Sanjeevani Jadhav and Sucheta. “I don’t deny that it will be all easy for me but I will be working hard at my end to achieve I want to,” says the long-distance runner who served the Indian Railways for a lengthy spell of fourteen years (2005 to 2019), where she had last served as a Chief Ticketing Inspector before shifting to SAI Bengaluru.

Jaisha attracted a huge controversy over her participation in the women’s 42-km event at the 2016 Rio Olympics, where she had alleged that she fainted at the finish line since she was not given adequate refreshments during the race. Three down the line she is clear about the turn of events. “It is mandatory for refreshments to be served at seven designated spots and every runner will have officials from their respective countries at these spots. There were no Indian officials placed in those seven spots and our coach Nikolai Snesarev had asked me not to have water from other officials. It took a toll on my body as I collapsed completely at the end owing to dehydration and was admitted to hospital,” she recounts a dark phase in her successful international career which saw her bag two bronze medals at the 2006 and 2014 Asian Games in 5000 and 1500 metres respectively.

Every athlete goes through ups and downs and Jaisha had plumbed the same when her career hit a roadblock during the 2006-2010 period owing to injuries and that’s when she met her future hubby Gurmeet Singh – a NIS, Patiala coach. Jaisha came to NIS Patiala in 2010 for training, while Gurmeet was doing his coaching certification course and both got along like a house of fire. “Gurmeet is my big pillar of support – he stays in Ludhiana working in the SAI centre there and I’m based in Bengaluru. He has played a big role in all my success on the athletic track,” she is full of praise for her husband.

Jaisha talks with pride about the struggles she endured to become an international athlete. The struggles of the family were aggravated by the fact that her father was bed-ridden when she was only five and her mother had the big responsibility of sending her four girls daughters to school. She quips:

The soft-spoken long-distance runner says the 2022 Asian Games is very much on her radar. “If I can’t qualify for the 2020 Tokyo Olympics, I won’t give up competitive comeback aspirations and will strive to make the cut in 5000 and 1500 metres for the 2022 Asiad,” she signs off on a sanguine note.