Extra toe and toothache not a barrier for Swapna Barman 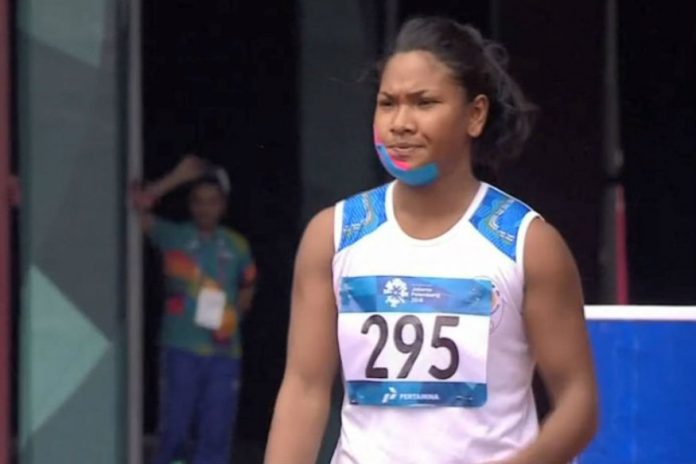 After the completion of the 800m race, which was the final event of women’s heptathlon, Swapna Barman fell to the ground, punched the air with both arms and yelled in delight.

After all, she broke the 6000-points barrier to clinch the gold medal and became the first Indian to win a gold medal in this event. It is a deserving medal for the 21-year old from Jalpaiguri in West Bengal, who braved all odds and came out on top to outclass others and be the best in Asian Games.

#SwapnaBarman grabs the second GOLD of the day and equals the Gold medal tally at the 2014 #AsianGames in the process. What an amazing day for Indian Athletics.

Swapna’s journey was never easy. Her father Panchanan Barman was a rickshaw puller before a massive stroke in 2013 left him bed-ridden. Her mother Basana worked in a tea estate and did odd jobs to feed the family, which has four kids, including Swapna. Add to that, Swapna was born with twelve toes, six on each foot, which means a regular shoe doesn’t fit her and adds to the pain while competing.

“Ahead of the Games, my main worry is I’m not getting the right shoes for high jump,” she told Reuters from her training centre in Patiala. She further said, “I never had customised shoes, and I’ve been managing with a model which is unfortunately no longer available in India. I still have an old pair of them, and I’m going to use them in Jakarta.” This means that Swapna won the gold by running in old shoes!

Swapna, as a fourth-grader, participated in a variety of sports, like high jump, long jump, gymnastics and football. She was put in contact with Subash Sarkar and saw Swapna set a new record in the national meet, and she relocated to Sports Authority of India campus in Kolkata.

Her stint at SAI turned out to be a life-changing moment as she switched from high jump to heptathlon.

She took part in 2013 Nationals for Juniors in Chennai and bagged two golds in the heptathlon and high jump and set new national records. She had participated in the previous edition of Asian Games as a 17-year old and had finished fifth with 5178 points. She then proceeded to win gold in heptathlon and silver in the high jump in 2015 National Games in Kerala.

Swapna came into limelight after she won a gold medal in Asian Athletics Championship in Bhubaneshwar last year, which sealed her spot in the World Championships in London.

But her ankle and back injuries, which had been troubling her since 2015, came back to haunt her and this resulted in her finishing 26th with a total of 5431 points. Post this; she was out of action for over a year to recuperate from her injuries.

Back to full fitness, Swapna participated in the Inter-State Championships in Guwahati in June where she finished second to Purnima Hembram with 5725 points, which was below her personal best of 5942 points.

But the target to qualify for Asian Games was achieved.

At the Asian Games, Swapna hit another roadblock when a toothache left her chin bandaged. Despite battling pain, she participated in all events by giving all her effort.

But in 200m race, she clocked time of more than 26 seconds, and that led to conceding the lead and becoming second in overall standings.

In the long jump, Swapna recorded 5.82m and then a leap of 6.05m. But it was the javelin throw which swung the momentum towards her by throwing her personal best of 50.63m in her first attempt. In the final event, 800m race, Swapna ended the event with a timing of 2:21:13 which earned her 803 points and a total of 6026 points, enough to win gold and broker her personal best too.

The third-year Physical Education student at Kolkata University doesn’t have a stable job yet, though Go Sports Foundation and ONGC have helped her with finances, Swapna’s story is a tale of grit, determination, single-minded devotion and overcoming all obstacles to reach success.

She not only has made her family proud but also has made her country proud at the Asian stage in an event, which is considered as the toughest to compete.

Face it! As much as we laud our better showing in the Commonwealth Games and Asian Games, India is not going to be a force to...
Read more
129,194FansLike
11,359FollowersFollow
6,948FollowersFollow

With Olympics being postponed, coaches to churn out new plans Press Trust of India - Modified date: March 27, 2020
The athletes are playing the waiting game for now but coaches involved with India's Olympic-bound bunch have already put their thinking hats on to redraw the preparation plans a day after the Games got postponed to 2021. The deadly COVID-19 pandemic caused an unprecedented...
Read more