The dazzling lights and fireworks yesterday in Indonesia treated fans to a spectacle that every sports fanatic looks forward to. The 18th edition of the Asian Games is declared open and a fortnight of sporting extravaganza shall be the highlight as the quadrennial event has begun.

A 572 athletes squad from India shall be competing across 36 sporting events in Jakarta and Palembang. The Indian team shall look to better their best performance at the Asiad which came in Guangzhou in 2010 where we bagged a total of 65 medals including 14 Golds. The last edition in Incheon saw Indians amassing 57 medals with 11 of them being gold.

While India’s medal hopes rest majorly in athletics, wrestling, shooting, boxing and badminton, it is interesting to note that Tennis has also being a favourable discipline in bringing glory to the Nation.

A quick preview of the Indian tennis squad and their chances.

With Sania Mirza expecting her first child and the veteran Leander Paes pulling out last minute from the event, the Indian tennis squad might be a bit low on confidence but certainly look all set to take on the challenge. Till date, Somdev Devvarman ’s individual Gold in Guangzhou is the only singles Gold for India at the event. But with Ramkumar Ramanathan playing at his best, we can most certainly look forward to him to emulate the feat this time.

In the absence of Yuki Bhambri who opted to skip the Games for the US Open, all eyes will be on the 23-year-old Chennai star Ramkumar Ramanathan who made it to his maiden ATP Final in Newport last month.

The big-serving Ramkumar who also has developed a penchant for a perfect net play shall look to make a statement in Palembang this fortnight. The India No two who also reached the Final of the $150K Challenger in Chinese Taipei this April is expected to have a shot at some metal.

The 118th ranked Ramanathan has all the chances to grab glory with many top Asian players missing out on the event due to the season-ending Major at Flushing Meadows. World No 23 Kei Nishikori, World No 25 Hyeon Chung, No 88 Mikhail Kukushkin and World No 97 India’s Yuki Bhambri are those whose absence will be conspicuous but also works in favour of Ramanathan and Prajnesh Gunneswaran who are the medal contenders in Men’s singles at the event.

Prajnesh Gunneswaran ranked 161 in the World is also a favourable bet for India. The 28-year-old southpaw was at his heroic best in the World group play-offs tie in April this year when he pulled a sensational win over Wu Yibing in the fifth deciding rubber to gift India a 3-2 win over China. Prajnesh who was picked as a replacement for Bhambri went the distance and proved his mettle with that win.

He also clinched his first ATP Challenger title at the Kunming Open in Anning, China. Prajnesh lost an elusive chance to make it to the main draw of the French Open as he already had left the city and failed to sign in but he qualified for the Stuttgart Open and shocked the 6th seed Denis Shapovalov before going down to Guido Pella in the round of 16. Playing at a reasonably good level, Gunneswaran can be a winning prospect at the Asiad this time.

Ankita Raina, India’s top-ranked singles women’s player will be gunning for glory too. With two singles ITF titles and a career high of 181 this season, Raina is all poised to make an impact again at the Asiad.

To her resume are the third round in Women’s singles and the second round in Mixed doubles in Incheon in 2014. Raina was also a part of the team that reached the quarterfinals in that team event that year. The only unbeaten player in the Fed Cup this year, Raina became the poster girl of Indian tennis with her smashing wins over top 100 players.

She defeated  Lin Zhu of China and Yulia Putintseva of Kazakhstan to help India retain their place in Asia/Oceania Group I. Raina also tasted Grand Slam debut by making it to the qualifying of Wimbledon this year and reached the second round. A winner of the Women’s doubles silver with Prarthana Thombare a the 2017 Asian Indoor Games, Raina is well in the groove to make it large at the Asian Games. She will be playing in all three events of singles, doubles and Mixed doubles. Karman Kaur Thandi, 20 is steadily rising the rankings in the Women’s singles. Karman won her first singles title on the ITF Pro circuit in June by lifting the $25000 title in Hong Kong. With a career-best ranking of 197, Karman Thandi will go head-on at this year’s Asiad. Seeded 7th in the event, Karman will have a bye in the opening round. Ankita is seeded 6th, and she too will have a bye in the first round.

The Women’s singles albeit is going to be much more competitive as compared to Men’s. Many of the top WTA players are available in the women’s, and our girls will face stiff competition.

Shuai Zhang, World no 32 will be the top seed and defending champion World No 53 Wang Qiang along with 2014 runner-up Luksika Kumkkhum (93) of Thailand, Wang Yafan (91) and Duan Yingying (109) of China, Sabina Sharipova (124) of Uzbekistan and Miyu Kato (169) of Japan will be the seeded players who can pose a threat to our mission in Women’s singles.

Doubles prospects in both Men and Women 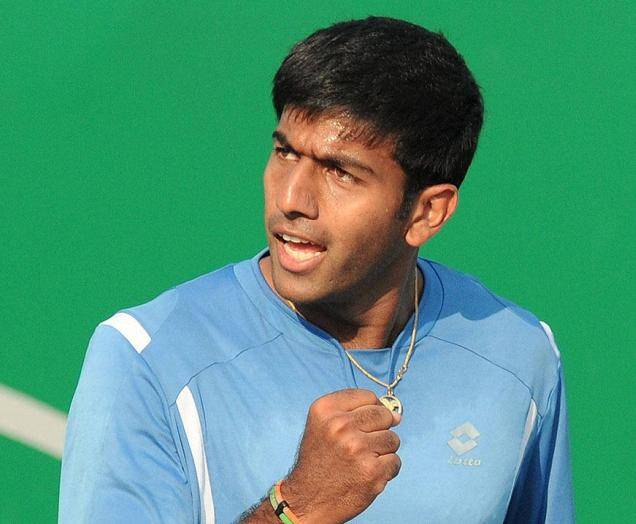 Veteran Rohan Bopanna is coming from an injury lay-off since retiring mid-match in Wimbledon this season. He partners with another seasoned campaigner Divij Sharan who has won the Men’s Doubles bronze with Yuki Bhambri in 2014. While Bopanna will aim for his first medal at the Asiad, the deadly combo of the two top-ranked doubles players of India make for a brilliant duo who can go deep into the event.

The second doubles pair of Ramkumar Ramanathan and Sumit Nagal have come together in a bizarre situation after Leander Paes withdrew dramatically at the eleventh hour. Paes cited his reason for withdrawal as not having a doubles specialist to partner with. Sumit Nagal who is on a dwindling form in both singles and doubles looks for a grim prospect in this second pairing for men’s doubles. However, with Ramanathan we can hope they can find some winning ways together.

In the Women’s doubles, Ankita Raina will partner up with doubles specialist and 2014 bronze-medallist Prarthana Thombare. The fifth-seeded combine of Raina and Prarthana look to be a promising prospect in the doubles.  Rutuja Bhonsale and Pranjala Yadlapalli will be the other women’s doubles pair. The duo has lifted two ITF $25K titles together and are the best bet in this event for a medal.

2017 French Open Mixed doubles champion Rohan Bopanna partners with India’s top-ranked Ankita Raina in the Mixed doubles at the event while Divij Sharan and Karman Kaur Thandi are the second duos in the Mixed doubles. Seeded 4th and 7th respectively, both these pairs although coming together for the first time can hope to go the distance in the event.

With that elusive singles Gold and a direct ticket into the Olympics, it shall be interesting to see who grabs the glitter. With India finishing by amassing 66 medals in the Commonwealth games including 26 gold, 20 silver and 20 bronze, the benchmark of expectations has already been set for this event. The need of the hour is to go past the FIVE medal count from the last edition by adding a few more. Time will tell if the Indian tennis squad will make that count surge.