The 25-year-old Pravin Jadhav's fighting attitude has helped him reach the highest stage in Archery.

Pravin Jadhav, the young archer from India impressed with his performance in the Individual Men's Ranking Round in Archery at Tokyo Olympics overshadowing the likes of Atanu Das and Tarundeep Rai earlier today. He finished at the 31st position scoring 656 points out of a possible 720 points in the men's individual ranking round. But Jadhav did not have it easy to reach this point in his life.

Pravin Jadhav resided in a shack near a drain in Sarade village in the Satara district of Maharashtra during his childhood. Imagine a person who struggled to even eat two full meals a day and was clueless of archery being an Olympic sport is now making his nation proud. His life serves as an inspiration as his early days were filled with hardships. Ramesh, Jadhav's father used to work as a daily wage labourer at a construction site and his mother worked as farm help. Remembering his days filled with nothing but sufferings, he said,

"Our condition was really bad then. We lived in a hut. We didn't have electricity and there was barely any money."

The 25-year-old had a choice in his life whether to play archery or join his father at the construction site. He was even asked to drop out after Class 7th by his father as he was not able to earn enough to keep his family fed two times a day.

"Like most people in Sarade, I almost joined my father as a daily wage labourer," Jadhav said in an interaction with Prime Minister Narendra Modi before leaving for Tokyo for the Olympics. 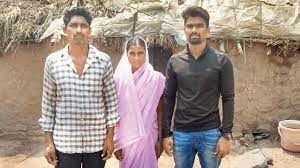 If he would have joined his father back then, we wouldn't even be discussing him; but fate had other plans. Pravin's sports teacher Vikas Bhujbal at the Zila Parishad School urged him to join athletics to earn some money. This was his chance to take the shot to avoid working as a daily wage labourer and he accepted it with open arms.

Problems didn't stop here, Jadhav's dietary requirements were not met so being severely undernourished, he once fainted while warming up. Bhujbal, his coach, took the charge and incurred expenses to provide him with a balanced diet. His journey now began to pick up pace as he won medals at taluka and district level with a better diet. He also got selected for the Krida Prabodhini scheme offered by the Maharashtrian Government to provide free coaching, education and lodging to athletes at residential academies in rural areas.

Starting his archery training at #Amravati, Jadhav got selected for International Junior Camp in 2015 and made it to the Senior team in 2016 World Cup

Let's cheer for him

Now you must be thinking, when did Jadhav actually begin his career in Archery? It was at this moment in the hostel in Ahmednagar when he was chosen for a drill and he shot 10 out of 10 balls in a ring from a 10-meter distance. Post this, he was stationed at Krida Prabodhini in Amravati, Vidarbha to sharpen his skills in Archery. Another unique thing about Jadhav is that he used traditional bamboo before using modern equipment. He used to face the pain due to the weight of the recurve bow as he was slightly weaker and felt uneasy in his shoulder while shooting. But he stood against all odds to move past the pain and bad results and kept on learning to be better at it. The major motivation for him was his alternative reality which was to work as a labourer.

"I was aware that I wouldn't have to work as a laborer if I didn't succeed (in archery), which is why I continued working hard. In the toughest times, my thinking used to be that after doing all the hard work to reach this stage I can't let go and accept defeat, so I kept working hard towards my goals," said the young Indian in an interview with the Times of India.

The financial troubles have always haunted Pravin Jadhav and his next issue was when he had to buy his own archery equipment costing Rs. 3 lakh. The government came forward and supported him by giving him the grant to buy his own equipment and participate in the world cup. His situation seems to be better after joining the Indian Army in 2017 through the sports quota and now trains at the Sports Institute in Pune.

Living his dream, his life has been one hell of an adventure struggling through every phase but now, he is onto scripting history. Wish him the best as he competes in the 1/32 elimination round of Archery at the Tokyo Olympics.