Atanu and Deepika, who got engaged in 2018, are having a good time at back home at the former's house in the Bansdroni area of South Kolkata, and staying close to family members have been mentally less exhausting.

"A narrow escape!" That's how archers Atanu Das and Deepika Kumari describes their return to home hours before the lockdown was enforced across the length and breadth of the country to fight the COVID-19 pandemic. Both of them were training at their camps at the Army Institute of Sports, Pune, training for the Olympics and after realising the gravity of the situation, they chose to fly down to Kolkata.

"We were lucky to reach home just before the lockdown started Staying in Maharashtra, the most infected state in the country, we couldn't predict what would be the situation like. We were told in camp to go to our homes. Our fortune shone that day as many of the flights got cancelled and luckily our flight was on schedule. After reaching home in Kolkata, we felt relieved," Atanu mentions with a satisfactory tone over a telephonic conversation.

Atanu and Deepika, who got engaged in 2018, are having a good time at back home at the former's house in the Bansdroni area of South Kolkata, and staying close to family members have been mentally less exhausting. "We had the means to return to our home and staying with family. I will consider myself fortunate. Many couldn't return because of the strict lockdown and are waiting to do so once the lockdown is halted for some time," remarks Deepika.

Though the imminent target of the three World Cups in Guatemala, China and Berlin, followed by the Olympics stands postponed, the couple are flexing their bows and arrows and have been maintaining a routine every day to stay ready whenever the clarion call is given to head back to camps. "We are maintaining a daily routine. Our day starts with meditation and yoga in the morning. We have installed a portable 10 m target range inside our house and that's where we are practising for hours. We practice in this range for hours," says the archers.

Atanu and Deepika have already won quota places for the Olympics. Atanu, along with Tarundeep Rai and Pravin Jadhav comprised the men's team which was assured of a spot after a 5-3 win over Canada in the pre-quarterfinals of the World Championships. Deepika made the cut winning the gold medal (individual event) at the Asian Continental Qualifying tournament in November last year.

With the Olympics deferred, both believe it has been a blessing in disguise, as they have now bought some time. Atanu opines, "I believe that Olympics getting postponed is a positive thing and we have one more year to prepare for it again. I will use this time to finetune my performance and we could really double our efforts. It's not a test of patience for me. Whatever be the situation, we have to be prepared. Instead of breaking down, we should respond positively with the opportunity we have in our hands right now." Deepika adds, "I will always be ready. We are prepared for any condition as such. I am confident that after this break we will be leverage the time to accelerate our performances."

Amid the lockdown and been confined within the boundaries of homes could take a toll on any athlete, who is used to the rigours outdoors and it is no different for the archers who have been seeking time-to-time help from their team psychologist over the phone. Every other sports are realising the importance of having a psychologist in the team and archery has seen a many positive impact now with the inclusion of the psychologist. "I have been immensely helped by our psychologist. You can understand how good a psychologist is by talking with them. When we are performing on the ground under a high-pressure situation, it is very important to keep your mind steady and have a positive thought process. These are small details which can impact your game. This is where sports psychologists have been immensely helpful to us. Last year we won a medal at the world championships and three of us qualified for the Olympics. Even at the Asian Championships, we won medals. So having a sports psychologist came as a blessing. We are on the right track," says Atanu.

We fight corona, stayed at home but active with our passion. Stay fit during the lockdown as well.#worldarchery #indianarcheryteam #stayathome #stayfit #kiranrijiju #JaiHind 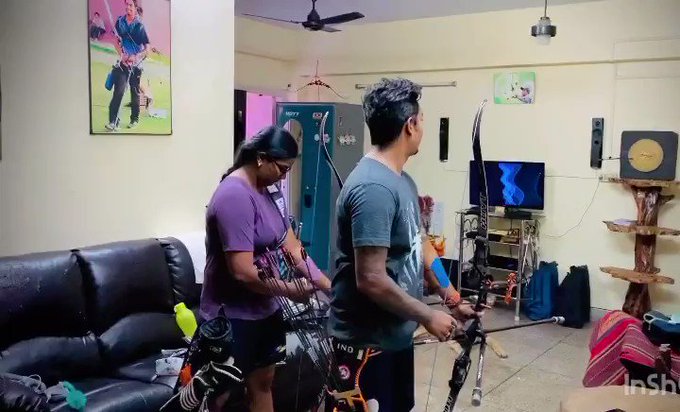 Deepika, a former world number one, has had her own share of big moments. The star archer has won 23 World Cup medals, five of them gold, apart from two gold medals at the 2010 Commonwealth Games and an Asian Games bronze medal from the same year. However, she believes that winning the Youth World Archery Championship held in Ogden, United States in 2009, is still her most cherished victory. "I was just 15 and new in the circuit, and didn't know much about pressure before that. I cherish the win a lot because there I first felt pressure for the first time and won the gold. Standing on the podium for the first time is still the best memory I have."

Deepika made her Olympics debut at the 2012 London Games and is aware of the pressure. Despite being at the pinnacle of success, an Olympic silverware has eluded her and she is ever hungry to make it count going into her third Olympics. She believes that a medal in archery will give the sport the necessary attention it deserves. "The Olympic medal is very important for not only me but for the entire country because archery has not brought any medal so far. A medal would be the best way for people to recognise archery as a sport. An Olympic medal will popularise the sport in India. If that happens, Indian archers will be looked upto in a different stature. It will be the deserving feather in the crown of Indian archery," says Deepika.

She further, states that the long-drawn dispute with the Archery Association of India (AAI) being resolved has been a blessing for the archers who could now be high is morale. She opines, "The AAI suspension had affected our morale because it was going on for a long time. We thank World Archery (WA) and SAI because it didn't affect our training. WA had to take stern measures but on the bright side of it, the issue has been resolved and that is a big relief for us archers."

Apart from training, the couple is sorting on different stuff to relax and enjoy their time at home. While Atanu has immersed himself in meditation, playing games and watching inspirational videos on YouTube, Deepika believes she has to catch up on a lot of movies she hasn't watched, "Atanu is a big movie buff and he never misses out on any new movie. It's me, who's taking some time out and watching movies right now. Just couple of days back, I watched Jim Carrey's 1994 classic The Mask," quips Deepika.

The couple were waiting for Tokyo Olympics to get over for them to get married. Now with the Games being postponed for a year, they are rethinking on their decision to get married. "Now, with the postponement, we're having second thoughts. We've been engaged for close to two years now. Maybe once the virus scenario eases, we might get married this year," says Atanu.

Vece Paes was a former Indian hockey midfielder,while Jennifer Paes is a former basketball player from India who captained the Indian national basketball team in 1982 and participated in the 1972 Olympics. Their son, one of India's most prominent tennis players, Leander Paes went on to win the bronze medal in 1996 Atlanta Olympics.

Though they are on a break, the preparation is keeping them ready and once the lockdown is over, both the archers will be looking forward to hearing from AAI and TOPS on when and where to resume their camp.