Day 5: Simranjeet joins Sonia and Pinki in the quarters of World Boxing C’ships 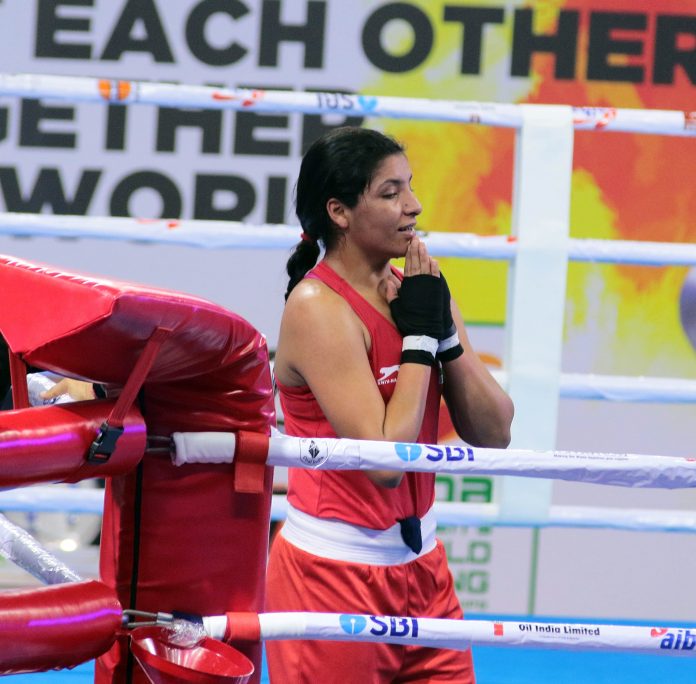 The giant-killing Sonia Chahal and experienced Pinki Jingra along with Simranjeet Kaur entered the quarterfinal of the 10th AIBA Women’s World Boxing Championships at the KD Jhadav Hall here today.

The three Indians joined the five other Indians—M.C. Mary Kom, Manisha Moun, Lovlina Borgohain and Bhagbati Kachari and Seema Poonia—in the last eight stages of the championships. Seema, who received a first-round bye in +81 class, got a direct quarterfinal entry with fewer boxers competing in the category.

But Saweety Boora was not as lucky as she lost in the middleweight (75 kg) pre-quarterfinals to qualifier from Poland, Elzbieta Wojcik, who won a unanimous decision against the Indian.  Saweety had received a bye in the first round.

But the afternoon certainly belonged to Sonia who beat former world champion Stanimira Petrova from Bulgaria in a split verdict decision of 3:2. What caught the imagination of the boxing aficionados was the open-guard and carefree style of the 21-year-old. The Haryana girl, who made her debut in the New Delhi event, seemed more determined throughout the nine minutes of bout. 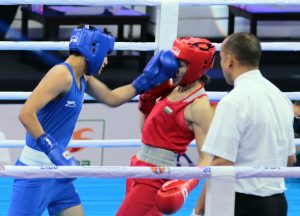 In the opening round, it was a very calculative Indian who took her time, keeping away from the experienced Bulgarian with nice little jabs to the left and trying to look for an opening. In the process, she managed to deliver a couple of right-lefts even as the Bulgarian was countering well.

The 2014 champion boxer, who also competed in the Rio Games, had her own plans in the second and came back strongly to unsettle the Indian somewhat, making an impression on the judges with her combination blows to the. But the clincher came in the third when Sonia began aggressively and ended the same way using the last 30 seconds to pack a punch to her blows. In the end, the split decision (28-29, 29-28, 28-29, 29-28, 28-29) favoured the blue-corner girl who got the nod from three judges.

“I followed my coach’s instructions to study my opponent’s style. She was obviously very good and despite my open guard I had a good defence too. I knew I was lagging being on points in the second and I had to show my forceful intent, getting close to her and deliver the punches. I am happy, I could win the tough battle,” said the Indian.

Though the Bulgarian was unhappy with the judges’ decision, Sonia countered diplomatically, saying, “Sometimes we think we got points, but the judges know it better.”

PINKI ALL THE WAY

In what was a fast-paced 51 kg bout, Pinki Jangra got a unanimous decision when she beat European champion from England, Ebonie Alice Jones, despite the latter forcing the Indian on back foot straightaway. 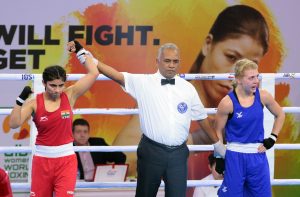 Opening with left jabs the Englishwoman traded combination punches and the Indian countered well to trade off some punches. In the second, the first-timer at the Worlds came charging, equally aggressive, but it looked both had their misses and scores.

However, in the third a tiring Englishwoman, who almost cornered the Indian with little room to manoeuvre, found the Indian managing to send some combination punches and a good right. In the last 20 seconds, the relentless Indian was piling on the agony which culminated in sending the Indians into the quarters, where she will meet North Korean Mi Choi Pang.

In the post-match interview, Pinki said she was confident of winning the bout. “I knew I would win against her (Ebonie) because she was inexperienced. I took my time but I had good counters which helped me win the judges’ verdict,” said the Hisar girl.

Asked about her next opponent, the 28-year-old Haryana boxer said, she had watched her (Pang’s) Asian Games videos and was prepared for her. “I have watched her bouts and we will plan for tomorrow’s quarterfinals,” said the Glasgow CWG bornze medal winner.

In the pre-quarters of the 64 Kg category bout, Ludhiana girl, Simranjeet got yet another unanimous decision as she beat Megan Reid from Scotland. The debutant Punjab girl had an upper hand in all three rounds with an impressive display of fast and furious boxing.