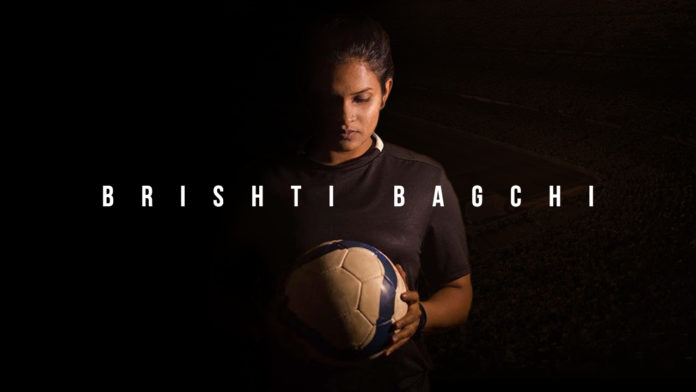 The deep-rooted passion for sports and the zeal to master the game can lead an athlete to scale greater heights. For Bengaluru-based Brishti Bagchi, clinging on to her fervour for football has paved the road for a rewarding journey. The 25-year-old is geared up to be the first Indian woman to set foot in the uncharted territory of Spanish football. This August, Brishti will be flying to Madrid, to accomplish her long-time dream to be a part of the Spanish League. She will train in professional football and play for the La Liga Division-1 team, Madrid Club de Futbol Femenino (CFF).

“I’ve harboured this dream for a long time, and now it is getting fulfilled. I am pretty excited about the journey ahead. I was looking for financial support, which also led me to start an online crowdfunding campaign. I’ll start my training during the first week of August. Along with the intense training, I will be learning the Spanish language. This is going to be a new set of experience for me,” asserts Brishti in a conversation with The Bridge.

Brishti, who has already been a part of the varsity soccer in the US, believes taking the leap into Spanish football will give her a better grasp on the game where she will develop her tactical prowess. “I’ve been a Barcelona fan and grown up watching the great Ronaldinho’s wizardry on the field. The Spanish version of football is superior in tactics, which I aim to pick up during my stay,” adds Brishti. Brishti realised her passion for sports at the tender age of seven when she was studying in the Centre for Learning, an alternative school located at Magadi Road, in the outskirts of Bengaluru city. She says, “I was probably seven when I was introduced to football by a coach from Seychelles who visited my parents’ office campus. Once a professional footballer, it was he who taught me the basics of the game. I was athletic from my childhood and pursued different kinds of sports. However, football took over me, and it gained a special place in my life.”

She further adds, “My parents, who are professors, always motivated me to pursue this passion. Besides, my school also gave me the right environment to thrive. So constant support played a big role to realise my dreams and taking my game to the next level.” The forward went on to be selected to play for Sports Authority of India (SAI) girls team, where she trained under Chitra Gangadharan. Soon after, she also had the chance to represent the state team of Karnataka, at Senior and Junior Nationals (as captain). She was invited to the Indian camp when another opportunity knocked on her door. In 2012, she got a call from the US to play varsity soccer at Oklahoma City University. It was a difficult choice for her, but she decided to take up this opportunity as she could also pursue her educational interest in kinesiology, the study of the mechanics of body movements.

There was no turning back for Brishti, who developed her game in the six years she was in the US. She further moved to North Texas University (UNT), from where she completed her graduation. “I ended up playing with the UNT club team and then Dallas City FC, the B-Division team which was a part of the Women’s Premier Soccer League,” says Brishti. She aimed for a spot in the US National Women’s Soccer League but was ineligible owing to her student visa. Nevertheless, a new door opened for her when a talent scout from Spain saw her game in 2018 and invited her to train in Spain.

In 2018, she trained for a month with the reserve teams of Madrid CFF. She was evaluated by a UEFA-licensed coach, who gave her the current opportunity, which, she hopes, will help her play professionally.

Brishti credits her success to several coaches and mentors who have been guiding factors for her throughout her entire journey. “A former student of my school, Leon Barreto, played a huge role in my formative years when I was a teen to have a better grasp at the game, after which I joined SAI. I was also coached by Okoli Valentine, a Nigerian footballer, who played a huge role in helping me find the edge in the game to participate abroad. In Texas, Carlos Olate, the President of the semi-pro team FC Denton, was like a mentor to me. He kept me motivated and helped me understand the tactics of European football better. The main reason I was happy because they had their faith on me,” says Brishti.

The forward, who made her maiden stint in the Indian Women’s League (IWL) this year for the Bangalore United FC, says it was a pleasant experience because she stayed abroad for six years and coming back to see good progress in Indian football was a delightful thing to experience. She played alongside national football team player Aamoolya Kamal and other experienced players like Paromita Sit and Tanvi Hans. “I believe Indian football has developed a lot over the years. There are a talented bunch of players who I think will make the country proud some day.”

Brishti has pursued a long road in her footballing career, and she believes that the way ahead is going to be more challenging as well as exciting for her as she aims to make her mark in European football.

Indian management for the upcoming T20 World Cup to be played in Australia has decided to go focus on their key strength, which is spin bowling.
Read more
Football

FC Goa beat Jamshedpur FC 5-0 at the JRD Tata Sports Complex in Jamshedpur on Wednesday to secure themselves the top spot in the Hero Indian Super...
Read more
Featured

Ever since the inception of poker, it is looked at as a game of luck. Terms like “it just wasn’t my day”,...
Read more
127,893FansLike
11,065FollowersFollow
6,555FollowersFollow