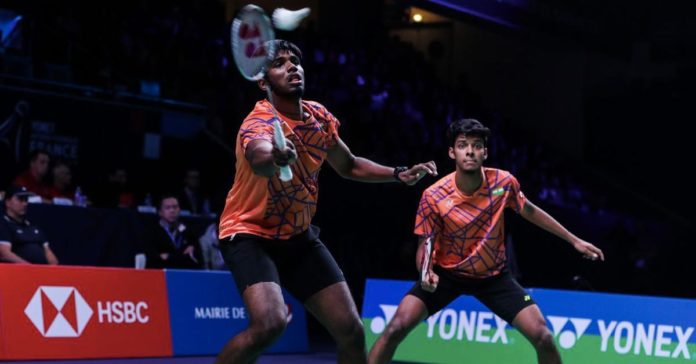 Up and coming Indian doubles pair Satwiksairaj Rankireddy and Chirag Shetty continued their dream run as they beat Japanese World No. 6 pair Yuta Watanabe and Hiroyuki Endo to progress to the quarter-finals of the China Open Super 750. The young duo beat Watanabe/Endo 21-18, 21-23, 21-11 in the pre-quarters on Thursday.

They will next face World No. 3 pair of Li Jun Hui and Liu Yu Chen from China in the last eight. Satwik and Chirag have faced them twice so far in their career and have a 1-1 head-to-head record. Interestingly, the Indians had lifted their first major trophy, the Thailand Open Super 500 title, back in August by beating Li/Liu in the men’s doubles final.

Satwik, 19, and Chirag, 22, have been on fire this year, registering impressive wins. Most recently, they became the first Indian men’s doubles pair to reach the finals of a Super 750 event at the French Open.

Interestingly, with the win, Satwik and Chirag are the only Indians left in the fray at the ongoing China Open. Elsewhere, Satwik and Ashwini Ponappa lost against the South Korean pair of Yu Jung Chae and Seung Jae Seo 21-23 16-21 in the mixed doubles pre-quarters.

Both Parupalli Kashyap and B Sai Praneeth, who has been in a decent run of form this season, crashed out of the Super 750 event on Thursday in the men’s singles pre-quarters after losing their respective matches.

Share
Facebook
Twitter
WhatsApp
Email
Previous articleBelieve It Or Not: World Squash Championships overlooking Pyramid of Giza
Next articleVideo: When USA won silver at Winter Olympics in 2010 by skating on Bollywood songs Priyam Marik - January 26, 2020
Our republic is going through a crisis. The idea of India- a product of centuries of evolution that should not be subject to communal taxonomy- is being reduced to a monolith that divides, derides, and devalues the secular foundations of our nation....
Read more