The warmth of home soil, as they say, can often do wonders. Last evening at the KSLTA, it was once again an Indian who made the most of the home advantage at the Bengaluru Open, a $150,000 challenger event. Indian Davis cupper and Asian Games Bronze medalist Prajnesh Gunneswaran toppled a resurging and fellow countryman Saketh Myneni in straight sets to clinch a second Challenger tour title and a first on home-ground.

Under the lights, in an all Indian affair at the summit clash of the Bengaluru Open, Prajnesh Gunneswaran needed just under an hour to register a second win over the 31-year-old Saketh Myneni. It was a second meeting between the two this season and a third overall. The duo had faced off in April at the Challenger Taipei where Myneni got the better of Prajnesh in three sets. In contrast, this time the in-form fourth seed wasted no time to race to the finish flawlessly without allowing his opponent to settle into the match. 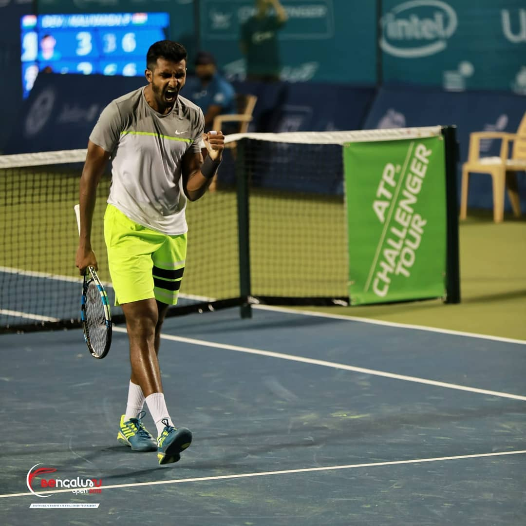 A relatively fatigued, Myneni who had to sweat it out with two three-set matches en route to the final, barely found the pace to handle the thunderous serves and ripping forehands of Gunneswaran in the Final. As for Prajnesh, who had dropped a set only once in the week against Sebastian Fanselow was handed a walkover by compatriot Sasi Mukund in the quarter-final. It certainly helped Prajnesh stay fresh for the championship match.

Prajnesh began the match breaking Saketh’s serve, and Myneni just failed to match the top spin-laden groundstrokes of the fourth seed. Not facing a single break point in the game, Prajnesh was brilliant with returns as well. Myneni, on the other hand, was disappointing on his second serves winning just 21% of them as against Prajnesh who won 63% in the entire duration of the match.

Prajnesh broke Myneni again in the seventh game of the first set when the latter was showing signs of a fight. But continuous errors from Saketh’s racket helped Prajnesh race to grab the first set.

The second set saw a similar trend. Myneni got broken again in the first game and then the fifth. His three double faults cost him dear even though he thundered down four aces in the match. Prajnesh, on the other hand, kept his errors in check with just a single, double fault and winning 59% of the total points. Nonetheless, Saketh has put in a brilliant week after coming back from several injuries to finish runner-up in South Asia’s biggest challenger event.

“I knew it was going to be tough,” said Myneni. “He plays heavy, he is a lefty and serves big. You have to neutralise that. It is also difficult to play against someone who doesn't give away free points. Credit to him for the fantastic week. A lot of positives for me to take as well." Saketh said. Gunneswaran, 29 who is coming off a scintillating season is deservedly the new India No 1 in the singles of Indian tennis. Usurping Yuki Bhambri for the top spot, the southpaw from Chennai is perched at 110 in the Live ATP rankings with his title triumph and will keep pushing further as the season draws to a close.

“It has been a great run,” an elated Prajnesh said after the victory. “I didn’t expect to do this well at the beginning of the year. I knew I had the potential to do well. But it all happened too quickly. All the work I put in is paying off. One more tournament in Pune and I hope I finish it as good as this one.”

Prajnesh who began the season ranked 243rd has steadily worked his way up. Proving to be the hero in that decisive fifth rubber of the Davis Cup tie against China, then breaking into the top 200 in April and going further to win his first challenger title in An-Ning, the year has been a breakthrough for the left-hander and how. He also went on to qualify for the ATP 250 event in Stuttgart where he got the biggest scalp, edging past World no 23, Denis Shapovalov.

Gunneswaran also made it to the quarter-final of the Aptos challenger where he stretched Thanasi Kokkinakis to three sets before succumbing to the Australian. Finishing runner-up at the Ningbo Challenger, Prajnesh keep riding that winning wave to keep treading forward. The following week, Prajnesh made it till the semis of the Liuzhou challenger where he lost to Radu Albot.

“I know the numbers and the possibility (of making it to the Australian Open main draw), but I know it’s a long shot,” he says. “As of now, it’s still five matches away,” says Prajnesh who believes in taking one match at a time.

For Indian tennis fans, it will be an exciting phase to watch another of their favourite getting inside the top 100 since 2014 when Bhambri had been enjoying the privilege.