Taekwondo: The latest entrant in the selection hijack circle for the Asian Games

Hardly over two months to go for the Asian Games and the barricades and poised issues around various sports federations are being dusted and new issues are flaring up. So now, following gymnastics and equestrian, Taekwondo has entered the centre stage to see a struggle for selecting teams. 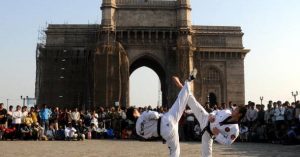 Taekwondo isn’t exactly a sport that holds hope for a medal and is also de-recognised by the sports ministry. However these two back-away fire shoots hasn’t stopped certain agencies from indulging in power games. If we go by facts, we have to take note that there are four different factions existing in the sport in India at the moment with each claiming allegiance to a different parent organisation. Some sources reported to the press, “The ministry has suggested that the Sports Authority of India (SAI) conduct selection trials and the same could then be ratified by the world body-recognised faction. That will make it easy for everyone but it may well run foul with World Taekwondo and we have already suffered once before CWG.” The officials reported to the press that the IOA was on the other hand keen on forming an ad-hoc committee, on the lines of gymnastics, involving all parties concerned that is, the government/SAI, the IOA and the faction officially-recognised by the world body. However there is no clarity on this matter yet. The IOA and WT recognise the Chetan Anand-led faction alone of this sport.

Furthermore, the Fencing Association of India (FAI) has been unable to send its team for the upcoming Asian Championships in Bangkok due to an impending official order from the SAI. Amusingly, the trip and its budget have already been cleared by both the Sports Ministry and the Finance Committee of SAI. Bashir Ahmed Khan, the Secretary General of FAI told the press, “We have to leave latest by 15th; we have already postponed our departure twice. Next up is the weekend, how would arrangements be made? We had given the proposal even before the ACTC was submitted, met the sports secretary on May 22 and got verbal clearance. Two days later, it was officially cleared after being satisfied with our selections and other details. And yet the SAI hasn’t passed the order.” A total of twenty-four athletes, that is, 12 men and women, four each in three events epee, foil and sabre, are to participate. The Secretary General further said that two more in each event would be added to the squad on return and the best 24 would then be selected for the Asian Games.

When a national-level taekwondo player auditioned for Indian Idol

The All Assam Taekwondo Association (AATA) recently announced that they would be setting up five new taekwondo training centres in the state. The decision...
Read more
Assam

I started my journey in taekwondo when I was studying in Kendriya Vidyalaya (KV) as a part of my extracurricular activity. From there, I...
Read more
Taekwondo

Bollywood is the lifeblood for Indians. The money, fame and glamour attached with the industry attracts commoners towards it. The actors in Bollywood are...
Read more
Karate

Karate and Taekwondo are two of the most popular martial art forms across the world. The sport of Taekwondo is being played regularly since...
Read more
Taekwondo

Though, taekwondo is one of the most popular martial art in the world, it has never been a mainstream sport in India. So, it...
Read more