In October 2014, a young girl aged 9 got her first taste of shooting as she visited a skeet range owned by a close family friend- Telangana shooter Gautam Gianchandani. Her family was expected at lunch in a little tradition that skeet shooters liked to follow- cooking biriyani in the open air- enough for a large group of people. More than the food and the camaraderie, it was the skeet range that really impressed her.

That little girl was Esha Singh.

Fast forward to 2018 and Esha Singh has graduated to a skilful National level shooter at the very young age of 13. Only yesterday, she did the unthinkable by beating out the likes of Manu Bhaker and Heena Sidhu to bag the 10m Air Pistol Gold across all three categories- the Junior, Senior and Youth. Consequently, Esha ensured that she made a mark and got people to notice her in the best way possible. She made a statement. And what a statement it was.

So, how did the transition from Skeet to Air Pistol come about given that Esha’s first tryst with sports shooting was with the former? The answer is a lot simpler than one might construe. “It was a huge weapon, and she was too young for it,” says Sachin Singh, Esha’s father in conversation with The Bridge. “The Air weapon seemed to be the only way forward then.”

While she may be the topic of conversation in Indian shooting at the moment, given her unexpected medals at the Nationals, the term “new kid on the block” may not be entirely accurate when it comes to describing her exploits in the sport.

Esha, hailing from the state of Telangana, has won medals at the State level for four years in a row now and for the last three years, the medals have only increased in number. Immediately after taking up the discipline as a 9-year old, she won the 10 m air pistol gold in the sub-junior age category at the Telangana State Championships. She followed that up the very next year with a triple Gold in the event across Junior, Youth and Senior. 2017 saw her emerge as the champion in only the Youth and the Senior categories and this year, and she again swept all three categories in her event.

But if you ask Esha what her most memorable medal has been among the numerous she has won, her answer is something entirely different. “Last year at Khelo India School Games, I finished third,” says Esha to The Bridge. “The night before that, I remember I was so ill that I couldn’t even stand.”

“That performance was special,” she adds. “It taught me exactly how much I am willing to push myself for my sport.”

Since 2015, the youngster has been associated with Gun For Glory, an academy run by Olympic medalist Gagan Narang. “It seemed to be the only plausible choice,” recalls Sachin.

“If you look among the academies in India, Gun For Glory in Pune, where Esha trains, is like a one-stop destination for every category of shooters,” he says. “You have a range, coaches, physios, mental trainers- all in line with international-level infrastructure. So there was never a doubt that this was the place to go for her.”

2018 has, undoubtedly, been a busy year for Esha Singh. In June this year, she was a part of the Junior World Cup in Suhl, Germany where she finished 20th in her event. From there, she went to the training camp in Switzerland for young shooters as a part of the Indian team. The 28th Meeting of the Shooting Hopes was her next destination; all this in addition to the regular participation in the National circuit and the persistent medals at the State level.

Her parents, Sachin and Srilatha, are both former professional car rally racers and Esha is especially close with her family who has always supported her dreams and taken her seriously at this young an age. “While travelling with the Indian team I became friendly with almost everyone but not especially close to anyone,” she says.

“During World Cups and other international events, you’re not allowed to use mobile phones. But I still found a way to communicate with my father because he was the only person I could speak to,” she laughs.

It must not be easy- stepping into the fray at the National level tournament and finding your competitors to all be seasoned international shooters who have, over short periods, come about to define the sport itself in India. But that does not seem to bother the 13-year old. “I always tell myself that I shouldn’t bother who I am competing against. That should not affect my performance,” she keenly adds. “In addition to starting her basic coaching under Gun For Glory, she has trained under Sundar Ghate,” says her father. “But it was only when Gun For Glory roped in Seon-il Kim for the OGQ-supported Project Leap that she began to fine-tune her techniques.”

“It is mainly because of Kim sir that my performance improved enough to be considered for the Indian team,” Esha quips in. “It involved a lot of advanced training spread across a lot of camps.”

Apart from this, mental training is one more thing that according to Esha is among the most critical aspects for a shooter to master. “One of the biggest things you feel when you’re in a high-pressure situation, no matter how calm you may seem to be, is your heartbeat,” says Esha with a maturity that will only help her going forward and onto bigger challenges. “The one who feels it absorbs it and doesn’t allow the pounding to affect one’s concentration is the winner.”

“There can be some reasons why there have been so many youngsters doing well in Shooting nationally and internationally,” says Sachin Singh. “The entire process of transition from sub-junior to Junior to Senior is very smooth. Age isn’t a factor. Performance is.”

“I want to make sure that I retain my place in the Indian team before the next set of Junior tournaments,” Esha says. “One day, I would love to be like Anna Korakaki. She is from Greece and my absolute hero.”

“Do you know she participated in both 25m and 10m Air Pistol at the Rio Olympics and won medals in both,” Esha gushes. Success at a young age can prove to be detrimental when you are least prepared for it. At 13, Esha has established herself as a someone is capable of producing wonders in the already competitive world of Indian shooting- someone from whom great things can be expected. To ensure that she stays on track, focus is highly relevant in all her future endeavours. Her father agrees.

“When participating in tournaments, she already carries more than she weighs- her equipment, all the expectations..” Sachin trails off. “The only advice I can give her is to remain grounded throughout it all. That’s how you ensure continued success.”

On that note, we are left wondering whether 2019 will be the year of yet another shooting star as she comes into her talent slowly. All we can right now is ‘Welcome to the club of champions, Esha!’ 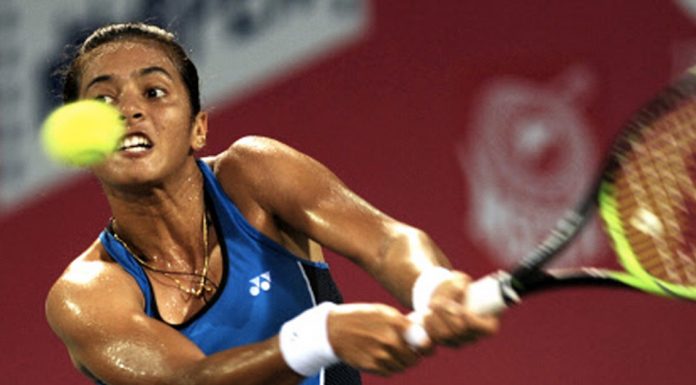