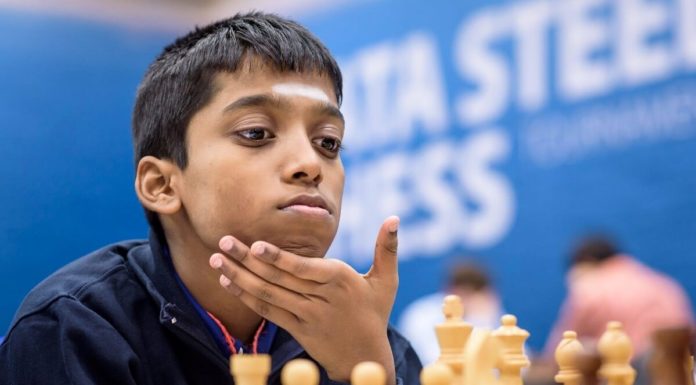 India are well-placed to pocket a few medals in the World Youth Chess Championship here on Friday, with top star R Praggnanandhaa all but likely to lead the charge with a gold medal.

WIM Vantika Agrawal (Under-18 Girls), Candidate Master Aronyak Ghosh (Under-16 Open) and LR Srihari (Under-14 Open) were in a good position and can eye a silver medal each at the end of the penultimate round. The first two can, however, hope to convert it into a gold, if they win their last games and the other matches go their way.

Grand Master Praggnanandhaa asserted his supremacy in the Under-18 Open, trudging to a crucial victory against IM Paulius Pultinevicius of Lithuania to take his tally to 8.5 points.

The 63-move victory gave him a half-point advantage that could fetch him the gold with a draw in the 11th and final round on Saturday. He will, however, be wary of top seed GM Shant Sargsyan of Armenia who thrashed IM Mitrabha Guha for his third straight victory to be in the second position with 8 points.

Vantika beat China’s Tianqi Yan to ease to 7.5 points, to be just half a point behind top seed Polina Shuvalova (Russia) who showed great skill to retain her lead (8 points) with another amazing victory.

Aronyak would probably rue the quick draw that he opted for, squandering the massive advantage that he had at the start of the day. Playing white against compatriot Kushagra Mohan, he was expected to go for a victory. But he chose to settle for a draw in just 20 minutes, saving himself for the last day.

It seemed like a good decision when top seed Hans Niemann (USA) suffered an unexpected defeat to fall behind. But Makarian Rudik (Russia) held on to his nerves to overcome G B Harshavardhan (India) to shoot into sole lead with 8 points. Aronyak had 7.5 points and would hope for a good pairing on Saturday for a dramatic finish.