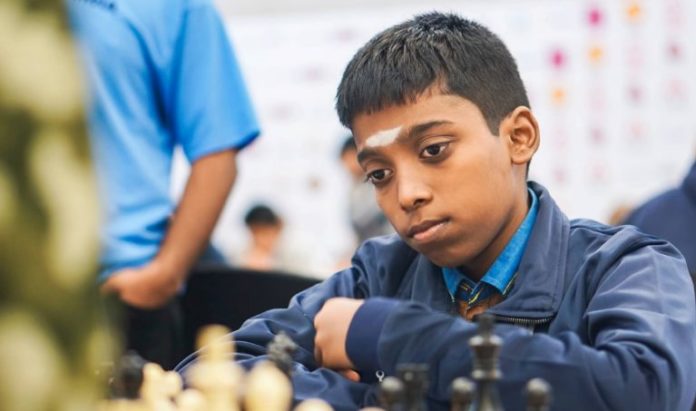 On October 29, Tamil Nadu had to bid adieu to the two-year-old Sujith, who fell into an abandoned borewell in Manapparai and breathed his last. While it was difficult to absorb the news of the unfortunate death of Sujith, India’s teenage chess sensation, Grandmaster R Praggnanandhaa, who recently became the U-18 World Chess Champion, announced at a felicitation function that he would like to dedicate his title to the deceased.

“I dedicate this title to Sujith. I really hope and pray that this doesn’t happen to any other child,” Ramesh had told the Times of India on 30th October. The 14-year-old chess grandmaster from Chennai made the announcement while attending the felicitation event at his school, Velammal Matriculation Higher Secondary School in Mogappair.

During the event, the staff and students observed two minutes of silence and lit candles in remembrance of Sujith. As a gesture to felicitate the champion, a cake cutting ceremony and “Dare to Win challenge” was arranged where some of the top chess players from the school played against Praggnanandhaa.

The 14-year-old chess prodigy took part in two major events recently: the World Youth (U-18) and then the World junior (U-20) championships in Mumbai and Delhi respectively. Though he won the U-18 World title, he finished ninth in the U-20 event. Praggnanandhaa will start his next tournament with the London Classic from December 1 to 9 followed by Sunway Open in Sitges, Spain from Dec. 13 to 22.

This was definitely a great gesture towards humanity displayed by the World Champion at such a young age. Sohinee - January 22, 2020
The Vasco Da Gama based young team, the Indian Arrows (Reserves) have pulled out of the Hero I-League Second Division right after the release of fixtures and group divisions. The Indian Arrows, who come under the wings of the AIFF developmental side,...
Read more