According to a report by The Times of India, the Indian football team could be one of the participating teams in the 2024 edition of Copa America, the South American continental championships, after narrowly missing out on the 2021 edition.

The 47th installment of the tournament, which was actually scheduled for last year, had to be postponed due to the Coronavirus pandemic and will now kick off on June 11. Argentina and Colombia are the hosts for the same. The next installment of the showpiece event will be held in Ecuador in 2024 which should give India ample time for preparation should they actually get an invitation. 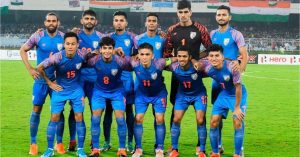 The opportunity to participate in this year’s event arrived a little late in the day for the All India Football federation (AIFF) after both Qatar and Australia opted to back out. Interestingly, following their withdrawal from the tournament, Australia actually spoke to the AIFF and CONMEBOL (the South American Football Federation) to explore the opportunity of India replacing them. Unfortunately, although the organisers were excited about India’s participation, the AIFF had to back out because the dates clashed with India’s upcoming World Cup Qualifiers in June.

What seems like a huge miss for Indian football in terms of global exposure could have been averted had the qualifiers taken place earlier in March or April. However, that didn’t work out for Bangladesh and Afghanistan, who are both scheduled to face India. As a result, the Asian Football Confederation (AFC) had no option but to postpone the qualifiers to June.

With Australia and Qatar backing out, this year’s Copa may proceed with just the 10 South American teams if the organisers fail to bring in two replacements. Had the dates worked out in India’s favour, this could have been a huge step forward for Sunil Chhetri and company towards staking a claim in the global footballing conversation. However, with there being a chance of India getting a look-in in the next edition, plans have to be set afoot to make that a reality. One can only imagine how massive it would be for the likes of Anirudh Thapa, Ashique Kuruniyan and Lallianzuala Chhangte to line up against the Neymars and Lionel Messis of the world.