We take a look at India’s grey Gambling and Betting scenario along with the movement in Brazil pushing for regulating its betting laws in this year of 2021 and a possible way forward and addressing the Grey.

(This report has been jointly produced by Jaya Suri Phalpher, Managing Partner at Phalpher & Co along with Victor Targino de Araujo, a Gaming Law Specialist from Brazil who has worked in major Brazilian football clubs as Corinthians and Santos FC, and has been a lecturer with experience in many institutions in Brazil and worldwide.

The focus of this report is to put forth the Indian scenario and current tide and going a step further assessing it along with an insight with another country like Brazil which is possibly a step ahead in speeding up its race in finalizing its own betting and gaming regulations.

The subject of Gambling & Betting Laws in India has always been a sharply debated one. While each state enacts its laws around gambling and tightens or loosens restrictions basis its own factors – political, social, economic, religious there have for decades been two schools of thought (i) the conservative which challenges the existence of gambling and betting activities on grounds of religion, morals and defines them as addictions and harmful vices (ii) the other that challenges the restrictive contentions in the light of economic and revenue generation opportunities and freedom of leisure and sporting participation. Globally as well there is a dual outlook between the conservative and the supporters of regulating the betting and gaming industry however the ever growing “Grey” area needs to be addressed through updated laws and regulations.

With the lack of evolved regulations under the Gambling and Betting head specially with technology and the online interface there is a blatant and glairing overlap across the categories scrambling under the concepts of wagering, gambling, online gaming, betting, game of chance, game of skill, esports, real money gaming etc. to be conveniently used as required to pass off as legitimate and benefit from exemptions from restrictions under existing laws on a case by case and ad hoc basis.

With India forecasting a US$ 1 Billion + market for online gaming in the present year further propelled by the pandemic and lockdown year of 2020 the world including India is keeping a close watch on the International wave hugely deliberating on the topic of regulating betting and gaming activities. On 14th May, 2018, the US Supreme Court in a majority verdict in Murphy (Governor of New Jersey) v. National Collegiate Athletic Association invalidated the Professional and Amateur Sports Protection Act, 1992 (PASPA), a federal legislation that disallowed states to promote, operate, license, authorize or sponsor sports betting. While the United States of America’s federal system and India’s quasi federal system vary in many ways, this landmark judgement has also created a lot of excitement in the industry globally.

In this paper, we look to India’s grey Gambling and Betting scenario along with the movement in Brazil pushing for regulating its betting laws in this year of 2021 and a possible way forward and addressing the Grey.

I – SPORTS BETTING IN INDIA

In general (PGA) is the centerpiece of Gaming Legislations in India. In India Gambling, in general would include (i) acts of betting and wagering – but excluding games of “mere skill” – (ii) lotteries which is covered and regulated as per the central governments Lotteries Regulation Act 1998, and (iii) horse racing in accordance with certain conditions.

Overall, 14 States / Union Territories have adopted the PGA whereas other states including Delhi, Maharashtra, Gujarat, Andhra Pradesh, Jammu & Kashmir, Meghalaya have their own varying and distinctive legislations.

In 2002 the Haryana Assembly passed two bills Public Gambling (Haryana Amendment) Bill and the Haryana Casino (Licensing & Control) Bill, both reserved for Presidential assent, which was not granted due to dissenting opinions from various State Governments and Government ministries.

Since the PGA law, most of the state enactments came into place prior to the emergence of the “Online Gaming” and while some states are highly restrictive of the betting activities others have made exceptions and some such as Nagaland and Sikkim have even gone as far as enacting Online Gaming Regulations and the Nagaland Act even seeks pan India application by virtue of the territories falling under “Game of Skill” exemption from gambling ambit. Even with regard to casinos, two states i.e. Sikkim and Goa Daman & Diu have enacted laws allowing gambling to a limited extent and under a license at five-star hotels and at offshore vessels in Goa.

In general, each of these games/activites is at the mercy of their assessment as a game of skill or a game involving preponderance of skill over pure luck or chance which would put them in the clear and they would not attract the restrictions under gambling laws. Therefore, the account of varying laws from state to state and the non-evolution of existing laws have left large scope for interpretation by the Judicial System on a case-by-case basis.

Year 2020: Unfolding A Movement for a Regulatory Body and Unified Gaming & Betting Code

In 2020, with the arrival of a state of pandemic, emergencies, and lockdowns, cancellation of public and live sporting events the gaming industry came to the rescue of the populations confined, and online gaming was enlisted as one of the 5 booming sectors during Covid 19 and announced the movement and shot in the arm for cries for attention to the gaming and betting laws as is evident from one of the below excerpts and reporting facts:

The Centre is yet to comment on the recommendations and the industry experts also have moved in furtherance and provided their comments to the guidelines and the effort by Niti Aayog and recommended the Draft Regulations cover not just subset of fantasy gaming but also the larger space of Online Skill Gaming Industry.

Brazil Law No. 13.756 lays down Guidelines for Fixed-odds Betting Regulations

The Law no. 13.756 (“Brazil Law”), of December 2018, incorporated mandatory guidelines (Articles 29-35)  to be respected and complied with by the Ministry of Economy (Government) developing the fixed-odds sport betting regulatory framework around betting which was to be enacted by the Ministry of Economy (“Regulations”). Accordingly, an overview of the Brazil Law guidelines would project the below

(ii) Taxation on the sports betting houses over the turnover instead the gross gaming revenue.

To conclude: KPMG consulting presented a study estimating a gross revenue of USD 2,1 Billion in fixed-odds sports-betting market, per year, after the upcoming regulations. 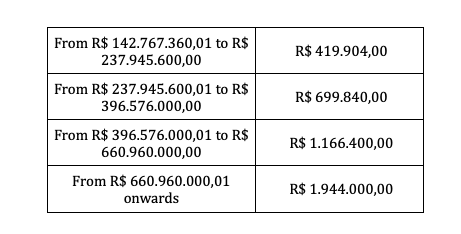 The long-awaited regulation of fixed-odds sports betting in Brazil is expected to occur until June 2021 (almost 3 years after the bill passed in Congress).

Despite the impreciseness of the Brazilian law – which the upcoming regulatory framework is expected to fix mostly –, the regulation of the sector is much expected and is a great step towards the de-prohibition of other gaming products. The competition shall not be ignored, but promoted, not only in defence of the consumer but in favor of a better and well-developed product in the near future, stimulating the economy, especially after a year affected by an unprecedented pandemic.

Also, it is expected a major contribution from the stakeholders and experts of the sector in favor of the evolution of the legal and regulatory framework with their worldwide expertise in shaping a profitable and well-succeeded product, bearing in mind that Brazil mostly ignored the gambling industry since the 1940s.

Nevertheless, sports-betting will be (much more than already is with overseas online operators injecting money in sports clubs and competitions) an important source of revenue to the whole sports industry in Brazil, not only with the “image tax” controversially imposed by the law exclusively in favor of the Football Clubs, but bringing earnings from sponsorships, advertisements, events, royalties, and most important, creating jobs.

While in Brazil the Government ponders over the proposed fixed-odds framework in India as well the force and ripples caused especially during this Pandemic calendar have huddled the stakeholders, government agencies industry experts, legal experts in areas of gaming, betting. gambling on a loud call for a unified regulatory framework and guidelines for betting laws and propelled to speed by the Draft Regulations proposed by Niti Aayog for Online Fantasy Sports as an affirmative expression of consideration and recognition of a pressing and overlapping subject placed on the Government agenda.

Overall the need of the hour would be for the Central Government to provide umbrella and basic guidelines to create a framework to:

The industry has gained momentum and pitched itself as a booming as well as a precariously positioned sector with great potential in generating revenues, employment, investments, tourism, etc., and is beckoning a Regulatory Framework to balance out the contentions of the two schools of thoughts and address the grey and to grasp the industry potential with check and balances and amended and up to speed legislation in the areas of contracts, tax, service providers, payment operators, information technology, money laundering as well as investments amongst others.

Following an unprecedented delay for a year, authorities in Japan are determined to organise the Tokyo Olympics this year. After the pandemic forced the...
Read more
Football

When Sunil Chhetri scored Bengaluru FC’s second goal against Jamshedpur on Thursday, in the process bagging his 100th for the club, it exemplified his...
Read more The Bridge Desk - Modified date: February 22, 2021
The new president of All India Chess Federation (AICF) Sanjay Kapoor said that the sales of chess boards in India went up by 500% in 2020 compared to 2019. It was discussed during the Annual General Body Meeting attended by 33 state units last...
Read more