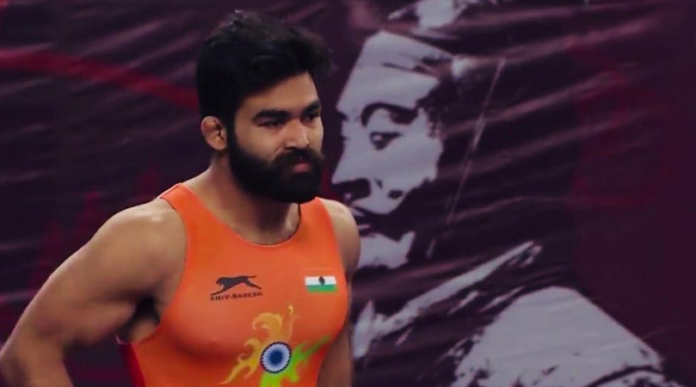 India’s Greco-Roman wrestlers began their campaign on a successful note as Gurpreet Singh (77kg) and Sunil Kumar (87kg) delivered silver medals on the penultimate day of the Asian Wrestling Championships 2019 in Xi’an on Saturday. With this, India’s Greco-Roman wrestlers have already done better than the last edition where they had won only a couple of bronze medals through Rajender Kumar (55kg) and Harpreet Singh (82kg).

Sunil Kumar gave his all but passivity cost him the gold as he went down 0-2 to Iran’s mighty Hossein Ahmad Nouri, the reigning Asian Games gold medallist, who also has three gold from the Asian Championships.

Earlier, Sunil took care of Tokhirdzhon Okhonov of Tajikistan 14-7 in the quarter-finals and then followed it up with a win over Kazakhstan’s Azamat Kustubayev 6-6 in a Victory by Fall verdict.

“I wish I were a little bit more aggressive. That could have changed the colour of the medal. I will strive to train harder and do better in the upcoming tournaments. It is because I had a chance for training in Kazakhstan and training with foreign partners also improved my standard,” said Sunil after the medal bout.

Gurpreet Singh brought India’s second silver medal of the day when he tasted a 0-8 defeat at the hands of Korea’s Hyeonwoo Kim, who has an Olympic gold from 2012 and the 2013 World Championships gold, apart from four Asian Championships gold medals.

Gurpreet was highly impressive against Qatar’s Bakhit Sharif K Badr of Qatar against whom he earned a 10-0 victory by technical superiority in the last-eight clash. Gurpreet was made to work harder in the semi-finals where he narrowly edged Tamerlan Shadukayev of Kazakhstan 6-5.

Prem (130kg) was another Indian grappler who was in contention for a medal on Day 5 of the Asian Wrestling Championships. But his hopes were dashed by Kazakhstan’s Damir Kuzembayev who recorded a victory by fall over the Indian in the bronze medal play-off.

Earlier, Prem had beaten by Uzbekistan’s Muminjon Abdullaev 8-0 in the quarter-finals but with the Uzbek making his way to the final, Prem got a chance to contest for the bronze medal.

In 55kg and 63kg, however, Indian wrestlers failed to make a mark. In 55kg quarters, Manjeet lost to Kyrgyzstan’s Asan Sulaimanov 3-5 while Vikram Krushnath Kurade went down to Jinwoong Jung of Korea 0-8 in the same round in 63kg.

The Greco-Roman wrestling competition will continue on the final day of this prestigious tournament. On Sunday, Gyanender (60kg), Ravinder (67kg), Yogesh (72kg), Harpreet Singh (82kg), and Hardeep Singh (97kg) will be in action