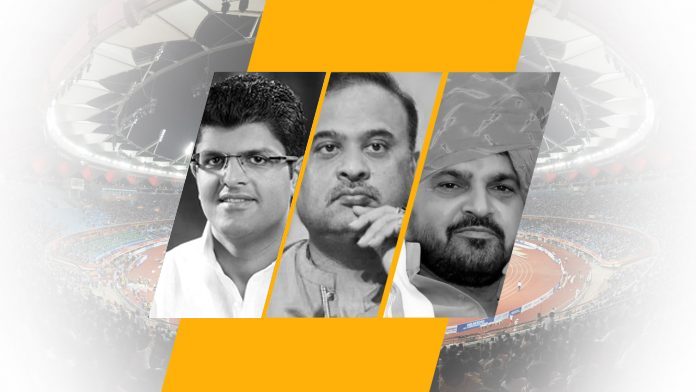 Last Updated on 1 year ago 4 min readIs there anything which comes closer to a dream job than that of heading a sports federation in India?

Heading a Sports Federation entails that you are not held accountable for pathetic results or even your actions. Additionally, from time to time, you get to go on foreign trips and the best part of the offer is that nobody has the authority to question your credentials; except, maybe, a few journalists but who takes them seriously?

Besides, literally the only qualification or requirement you need to head a sports body is a stint in any ministry. That is all that is considered good enough.

Sadly (or happily), most sporting institutions in our country are headed by politicians and ex-bureaucrats who have been holding positions as committee members for several decades most of them having no clue about the sport in general. Sometimes, the position of power at the top of the hierarchy seems to pass down as inheritance within families.

While the government of India continues to pump several crores into the sports budget, it seems that the major outcome of this has been the sports bodies becoming fertile grounds to make money.

Dynasties seem to rule Indian sports. The sons and cousins and family friends of ex-office bearers still hold on to the position and have not thought it necessary to quit the job. Nepotism is rife and a look at a few glaring examples is enough to prove how politicians and bureaucrats are running sports federations as if it is a family get together. Rajlaxmi Singh Deo is the President of Rowing Federation and currently the only woman in the country who heads a federation of an Olympic discipline. In 2008, Kamakhya Prasad Singh Deo resigned from his post as president and was replaced by his cousin, CP Singh Deo- husband and predecessor of Rajlaxmi at the RFI.

The Chautala brothers – Abhay Singh and Ajay Singh from the Indian National Lok Dal Party controlled the Boxing and Table Tennis federations for three terms (12 years) respectively. Not long after Ajay was convicted in a teachers recruitment scam and put to jail in Haryana, his son Dushyant took charge of affairs at the Table Tennis Federation of India following the annual general body meeting in January 2017. He ran and was eventually elected unopposed.

Partap Singh Bajwa, a Congress leader, is at the helm of the Judo Federation of India. Similarly, BJP leader Brijbhushan Sharan Singh is the President of the Wrestling Federation. Both of them with no prior knowledge or relation to the sport they are at the helm of.

The list of politicians in the top position of sports bodies is long. Digambar Kamat of Congress (Swimming), Himanta Biswa Sarma of BJP (Badminton), Praful Patel of Congress (Football) and K. Govindaraj of Congress (Basketball and Vice President of Indian Olympic Association) are all holding reins of various federations.

The author would not have raised eyebrows about politicians as administrators in sports if we produced world beaters on a consistent basis.

The only sport that has risen well is badminton, maybe the Olympic silver medal seems to have revitalized the game. Both the male and female shuttlers are doing well in Asian and World level competitions. And apart from weightlifting, badminton, gymnastics, and shooting – we really do not have many world level medals in the past few months.

For a long time, Indian sportspersons have been at the mercy of politicians and businessmen who have been running the sports bodies. After every disappointing multi-sporting event, questions are raised on why politicians, and not sportsmen, are managing Indian sports. But after a few days, as always, the clamour dies down and people forget about it.

Most young Indians live on a staple diet of European football and Indian cricket and offer a mere cursory glance at the Olympic sports section in newspapers and the internet. Often there are humorous quips and banter about corruption in the country’s sports ecosystem and most of the Indian pop culture does its bit to reinforce the idea of corruption in sports in various sporting movies.

But who are we to pass judgments on or question why a country of over a billion strong, fail to make a mark in world level competitions – if we do not know how sports are being run in the country?

Thanks to the sorry state of affairs Indian sports finds itself in due to the administrators, organizations like Olympic Gold Quest, JSW, and Go Sports Foundation have come up. These organizations make sure that the athletes get something they want, which the sports federations should be doing in the first place.

Athlete support programs often seem to be in place with such organizations as they do work equally at the top tier and grassroots programs. A look at the respective websites of these NGOs would give the appearance of a wholesome athlete development program which is probably more than one can say for most NSFs.

But how long can we rely on such organizations? Is it right that Federation posts be treated as political seats and breeding grounds for nepotism as is the case currently? Is India going to be content enough remaining a two-medal nation as we saw in the recent Olympics? What, then, can be a more permanent solution to a problem as pressing as this?

It’s high time administrators are held accountable for their actions.

The Symbiosis School of Sports Sciences (SSSS), a constituent of Symbiosis International University (SIU) is organising the third edition of the National...
Read more
Law in Sports

The Symbiosis School of Sports Sciences is organising the third edition of the National Sports Science Conference (NSSC) over the course of three days, August 29 to 31 at the University Auditorium in Pune.
Read more Team Bridge - January 21, 2020
World No. 2 Tai Tzu Ying will light up the court as Bengaluru Raptors begin their title defense in the fifth season of the Premier Badminton League against North Eastern Warriors at the Jawaharlal Nehru Indoor Stadium here in Chennai tomorrow. A treat...
Read more