There are a few clubs in the country which has a rich heritage and history such Kolkata’s Mohammedan Sporting Club. The club has been in operation since the 19th century, it has witnessed enormous success as a football team in the nation as well as around the globe. But their form in the past decade has dipped drastically. At present, they compete in the 2nd division I-League, which is unfortunate for a football club with such stature. Yet, it enjoys the privilege of being one of the most followed clubs in the country to date!

Founded as the ‘Jubilee Club’ in the year 1887, under the leadership of Nawab Aminul Islam. The name of the club was subsequently changed to ‘Crescent’s Club’ and then to ‘Hamida Club.’ It was only in the year 1891 that the club was finally renamed as the ‘Mohammedan Sporting Club.’ Aminul Islam’s main aim was to provide a backing to the Muslim community residing in the city of Kolkata.

The ‘Black Panthers’ came into prominence after they won the Cooch Behar Trophy in 1902, 1906 and in 1909. Although it was not before 1927 that the financial condition of the club improved when the team was promoted to the second division of the Calcutta Football League. With the improved performances, the management was able to acquire a considerable amount of investment which helped the club.

As per reports, an annexure of the annual report of 1928 mentioned that the Joint Secretaries of the club made an appeal to all concerned “to support a scheme of the club, extending its activities in the social sphere of Muslims”, and also requested for donations of Rs. 3500 to Rs. 4500. Although there was not a great response initially, the assistance received ultimately was largely beneficial for the cause.

It was in the 1930s that the Mohammedan Sporting Club became a household name. C.A. Aziz along with Aryan Club’s Dukhiram Mazumder were two of the masterminds in Indian football who first understood the importance of wearing boots. Aziz started to architect a unit which would go on to become an unstoppable force in Indian football, often termed as the ‘Invincibles’.

Mohun Bagan by then had some of the finest players in the country. Aziz started to recruit Bagan rejects like Kaleh Khan and Hafiz Rashid in 1931. He assorted players from all corners of the nation, often in the name of religion to prepare a team which would dominate Indian football in the years to come. The hard-work paid-off, after qualifying for the first division of the Calcutta Football League in 1933, Mohammedan Sporting Club became the first Indian club win the league in 1934!

That was the first of the five consecutive league titles they won till 1938. They were the first club to do so. History was created once again in 1940 when the men in ‘black and white’ became the first Indian club to win the Durand Cup, Asia’s oldest football tournament. Meanwhile, the club also claimed their maiden IFA Shield title in 1936. Overall, they reached a peak during that era. In the ’40s too, the Kolkata giants maintained their form and won several tournaments till late ’50s. 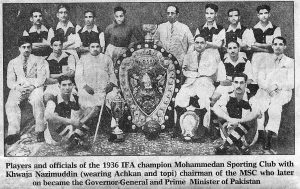 The next big achievement of the club takes us to the year 1960. The Aga Khan Gold Cup was then one of the most prestigious tournaments in Asia, named after Iran’s Prince Shah Karim Al Hussaini. Mohammedan Sporting Club lifted the trophy during the 1960 edition, thus becoming the first Indian side to win a trophy on foreign soil. Unfortunately, the competition organised by the Bangladesh Football Federation was in 1981.

As the years passed, the big three in Kolkata ‘maidan,’ Mohun Bagan, East Bengal and Mohammedan Sporting Club ruled Indian football. Each of the clubs regularly won trophies such as the Durand Cup, Rovers Cup, IFA Shield and the Bordoloi Trophy. But Mohammedan’s form showed a downward slope after the 1981 Calcutta Football League triumph. It was the era which shifted the focus to the Federation Cup, which was the most important club tournament back then.

After a consecutive win in the Federation Cup in 1983 and 1984, Mohammedan Sporting never won the title again. They won their last Calcutta Football League title in 1981, which was 38 years back. The National Football League started in the year 1996, becoming the top league in the country. Until then, the Santosh Trophy was the top football competition in the country. The ‘black panthers’ failed to qualify for the final rounds. Even though they managed to play in the top flight a few times, they never made an impact in the National Football League or the more recent I-League. 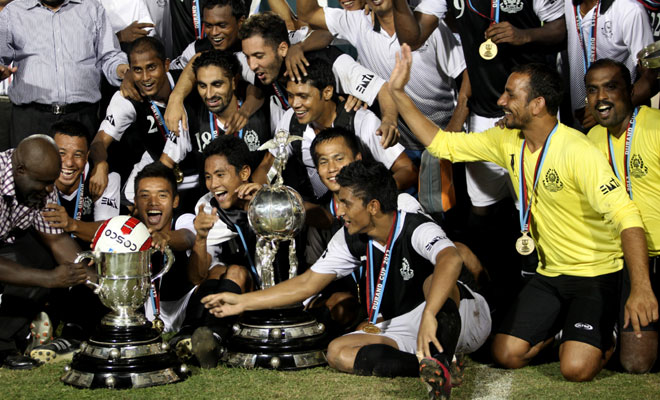 The Durand Cup win in 2013 and the IFA Shield triumph in 2014 are some of the recent achievements by the century-old club, although the weight the success is not huge in the current situation. This season, the Raghu Nany led side finished at the fourth position in the Calcutta Football League behind champions Mohun Bagan, runners-up Peerless and East Bengal. Their previous best performance in the competition was back in 2016 when finished as the runners-up.

Mohammedan Sporting Club played its last I-League during the 2013-14 season, in which they finished at the bottom and was again relegated to the second division. The ‘black panthers’ currently ply their trade in the second division I-League, hoping for a championship finish to break into the top flight once again. Having played three matches so far this season, they have lost two and shared the spoils in the other fixture.

It is very unfortunate for a team a team like Mohammedan Sporting Club in such a condition. Once the ‘invincibles’, they are now having a hard time re-establishing themselves in the Indian football circuit. Drastic transformations were noted when there was a change of hands in management back in 2016, but there hasn’t been an improvement in the results to that extent. Hopefully, Mohammedan Sporting Club will get back its glory days much to the joy of its millions of followers around the globe.

India's most decorated squash player, Dipika Pallikal is pleased to be spending time at home with her husband Indian cricketer Dinesh Karthik, during the coronavirus...
Read more
130,962FansLike
12,136FollowersFollow
7,150FollowersFollow