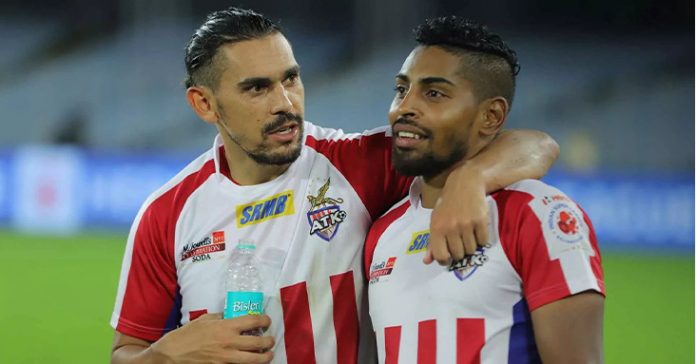 Two seasons filled with disappointing results — ATK FC’s credentials as one of the up and coming powerhouses of Indian football had gone for a toss. After all, in their first three years of existence, the club had managed to win the Indian Super League (ISL) twice and even build its own fan base in a city that had as many as three legacy clubs.

And all the while, Atletico Madrid was there on their side; to guide the Kolkata-based franchise, to supply them with whatever they needed, head coach, coaching staff, foreign players — you name it.

But once the Spanish club decided to orphan their Indian pet project, once they left the shore, things seemed to fall apart. A new management came in, there were changes in how the club ran, and yet, somewhere, the success mantra was missing.

The story was very different this season, though. Starting with a defeat against Kerala Blasters, ATK bounced back strongly in the second game where they hammered Hyderabad FC 5-0. A near perfect run, almost saw them topping the league table and claiming the prestigious AFC Champions League (ACL) berth — something every club eyed to begin with.

However, the defeat to a resurgent Chennaiyin FC under Owen Coyle at home coupled with FC Goa’s impeccable form on the pitch meant that Antonio Lobes Habas’ men would finish a close second.

“I am a professional. I am happy to get into the play-offs. The team finished sixth last season. Now we are second,” Habas stated ahead of his team’s final league game of the season against Bengaluru FC.

Not only him, it is understood, that although an ACL spot was the ultimate dream, the team management is content with the playoff spot and a potential shot at the title. And why not? Finally, they have cracked the code without Atletico in the scene, albeit with one common factor — Habas.

Getting Habas back on board was perhaps one of the most sly moves in Indian football this season. Although it meant burning a hole in their pockets, ATK knew the Spanish tactician would prove to be worth every penny.

Once Habas agreed, the next move was to take some difficult calls. Letting go off last season’s star and highest-earner Manuel Lanzarote might not have played well with the fans at that time, but the kind of transfers that the club would pull off in the next few weeks were unheard of in Indian football.

From Roy Krishna to Michael Soosairaj, from Agus Garcia to Joby Justin, each new signing bore its own unique trademark. What Habas was building was not only a winning team, but a team that could score goals in plenty and behind every new transfer were many sleepless nights and endless conversations.

Convincing Krishna, one of the most sought-after strikers in Asia, to put pen to paper was a masterstroke. Getting his partner in crime David Williams was yet another brilliant acquisition. Agus Garcia, Carl McHugh, Javi Hernandez — each new player had a specific role to play and that’s why he was signed. This is where the ATK management must be credited, Habas might have handpicked his soldiers but convincing them to join the battle was a whole different ball game.

First thing in mind that pops up when you look at ATK’s squad? Pace. Outright and sheer. With Krishna, Soosairaj and Prabir Das, the team can boast of three of the fastest players this season — three of whom have been crucial to their counter-attacking style of play. Prabir, of course, deserves a special mention just for the way he has come back from a ligament tear.

The second that needs to be highlighted is the depth in the squad. Through the 18 games, ATK got seven goals off the bench because they have players there who’d walk into the starting XI of any of the other ISL teams.

In Krishna, David Williams Joby Justin, Balwant Singh and Edu Garcia, Habas has enough options up front. Injury problems and what not, Pronay Halder, India’s first choice defensive mideo, only featured in seven games in the league stage. But the way Carl McHugh and Mandi Sosa performed, Habas could do away without Pronay.

The mix in defence as well played out to perfection. An experienced foreigner, the most experienced Indian defender, and a guy out to prove his mettle — the combination of Agus, Pritam Kotal and Sumit Rathi seemed like it was made in heaven.

One more key aspect of this ATK team which was different from Steve Coppell’s or Teddy Sherringham or anyone after the Atletico era for that matter, was the way all the players managed their fitness through the season.

Every year, the RPSG-owned franchise has brought in the best players, every year they have had the top coaches. But injuries has always been their curse, their achilles heel, until this season. Habas and his team though brought back the discipline in the dressing room and consequently, the achilles heel disappeared.

What Habas and the team management have done is give ATK a cushion. At a time when tensions are high regarding their merger with century-old club Mohun Bagan, making it to the playoffs after finishing second in the table will soothe many nerves before reality actually kicks in next season.

The task ahead this term, in itself, is quite tough — winning a two-legged semifinal against Bengaluru or Chennaiyin is not the easiest of things, and then, a hungry Goa could wait in the finals. But a third ISL win, though, would definitely go a long way in establishing ATK-Mohun Bagan (or whatever the merged entity is called from next season) as the biggest club in India, and that is what they are aspiring.

Tiri is set for a return to three-time Indian Super League (ISL) champions ATK FC, who are set to merge with Mohun Bagan and...
Read more
Extreme Sports

Endurance athletes are some of the most rigorously conditioned athletes. They’re most visible in sports involving running, swimming, cycling and rowing. Athletes competing in...
Read more
130,898FansLike
12,125FollowersFollow
7,143FollowersFollow