When humanity triumphed in sports Sport is a passion for those who play. It brings together people from all walks of life. And whether you are playing, supporting or coaching, it is believed that this shared love of sport can help bring the change and have a positive impact both on and off the sports field.

Sport is the best education one can provide their child with. It teaches sportsmanship, equality, respect and most importantly, humanity. There have been a lot of instances where irrespective of a win or a loss, the true spirit of sportsmanship has remained intact. Such situations give a sense of pride among the viewers and assure them that it’s not just about winning or losing but something way beyond that.

The ritual of shaking hands after a game is a perfect example of sportsmanship and respect between the players. The instances where humanity has prevailed sports can be seen in the following instances:

The 2016 FIFA Euro final which was a nail biter in which Portugal defeated the hosts France 1-0 after extra time, to claim their first major title. It was a heartbreak for the French fans seeing their team losing at home. One fan, in particular, was seen crying outside the stadium, and then, something incredible happened. A young Portugal fan approached the man and hugged him. This shows that there are people who love the game and love life. 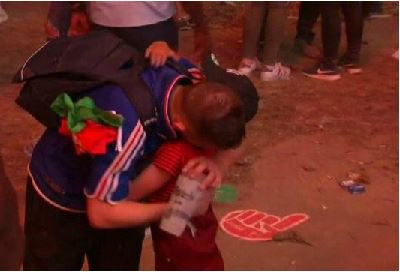 Community raises money for Olympic dad to go to Brazil.

Apart from the gritty football and several upsets that took place at the FIFA World Cup 2018, the event will be remembered for the good deeds of Japanese fans. In every single match which Japan played, the Blue Samurais were in the stadium to cheer their team, and after every match, they used to stay back to clean up the garbage inside the stadium. Virat Kohli asking the crowd to clap for Steve Smith.

In the ongoing ODI World Cup in England, Indian Cricket Team captain Virat Kohli asked the Indian fans who were there to support their team in a clash against Kangaroos to clap for former Australian skipper Steve Smith instead of booing him. Smith returned to international circuit after a year ban following the sandpaper incident. The crowd started chanting ‘cheater’ and booing him when he was fielding at the boundary. It was then, Kohli asked the Indian fans to refrain from their action and instead clap for the former Aussie skipper.

Usain Bolt giving back to the country he loves.

The sprinter Usain Bolt even after achieving so much success in his life, instead of enjoying the limelight off the field, he has used his foundation to give back to the country he loves – one that struggles with child poverty, hunger and related issues. Yogeshwar Dutt asked to give his upgraded silver medal to late Besik Khudukov.

Yogeshwar Dutt had won the bronze medal in the London 2012 Olympics. And, later the silver medallist, Besik Khudukov, was proven to be guilty of doping charges which meant Yogeshwar’s medal would be upgraded to silver. Besik was tested positive after his death in 2013. Yogeshwar was happy at first to be considered for the silver medal but later he said that he had great respect for Besik and the medal should remain with Besik’s family if possible, to keep his family’s honour intact. However, Khudukov was disqualified but Dutt showed a great symbol of humanity.

Sindhu fell short in the finals of the Rio 2016 Olympics to the eventual champion Carolina Marin of Spain. After consoling herself of the defeat, she went to the other side to lift up the champion and congratulate her. And, while doing that she saw Marin’s racquet which she flung it in excitement was lying on the ground. Sindhu picked it up and carefully laid it alongside the bag of Carolina Marin. Her gesture to pick up the racquet shows her respect for the game and for the opponent. Nikki Hamblin and Abbey D’Agostino after colliding with each other on the track assisted each other to continue the race.

At the 2016 Summer Olympics in Rio, Nikki Hamblin and Abbey D’Agostino collided with each other during a 5,000m heat and both of them fell. The two women helped each other finish the race and were allowed to compete in the final. Both athletes were praised for their sportsmanship and “Olympic spirit”, and were subsequently awarded the Rio 2016 Fair Play Award by the International Fair Play Committee. This award is a special decoration awarded by the International Olympic Committee to athletes, former athletes, sports promoters, officials and others who exemplify the spirit of sportsmanship in Olympic events or through exceptional service to the Olympic movement.
Peter Cupac, Pavle Kostov, Ivan Bulaja from Croatia are recipients of Pierre de Coubertin Medal. In the 2008 Summer Olympics, they lent their boat to Danes Jonas Warrer and Martin Kirketerp whose mast had broken shortly before the start of their race. Warrer and Kirketerp went on to win a gold medal.

During the Australia tour of India in Feb-Mar 2019, it was an initiative by BCCI and MS Dhoni to pay tributes to the CRPF jawans who lost their lives in the Pulwama terror attack on February 14. The Indian cricket team extended a special gesture towards the Armed Forces and the martyrs in the Pulwama attack as captain Virat Kohli announced before the toss of the third match that all the team members will be donating their match fees to the National Defence Fund. Also, all the team members wore a special army cap for that match. One of the sportspersons to win the Padma shri award on Monday is wrestler Virender Singh. Virender has been one of the best wrestlers...
Read more
Football

ISL 2020-21: Does the recent spate of draws indicate how defensive most teams are?

When the referee blew the final whistle on Sunday to mark the end of Bengaluru FC’s match against Odisha FC, most fans would have...
Read more
Football

After falling 3-0 against the same opponents three days back, the Indian U16 side managed to turn the tables on their UAE counterparts with...
Read more