This photo story captures the mightiness of Narendra Modi Stadium with its world-class facilities to help you and the world understand what India is capable of!

The world's largest cricket stadium - 'The Mighty Motera,' which has been renamed as "Narendra Modi Stadium," was formally inaugurated on 24th February by President Ram Nath Kovind in the presence of Union Home Minister Amit Shah.

As we walked around the largest cricket stadium the world has ever seen, it took us some time to sink in the magnificence of this architectural marvel. The total stadium area is equivalent to 32 Olympic size soccer fields put together! 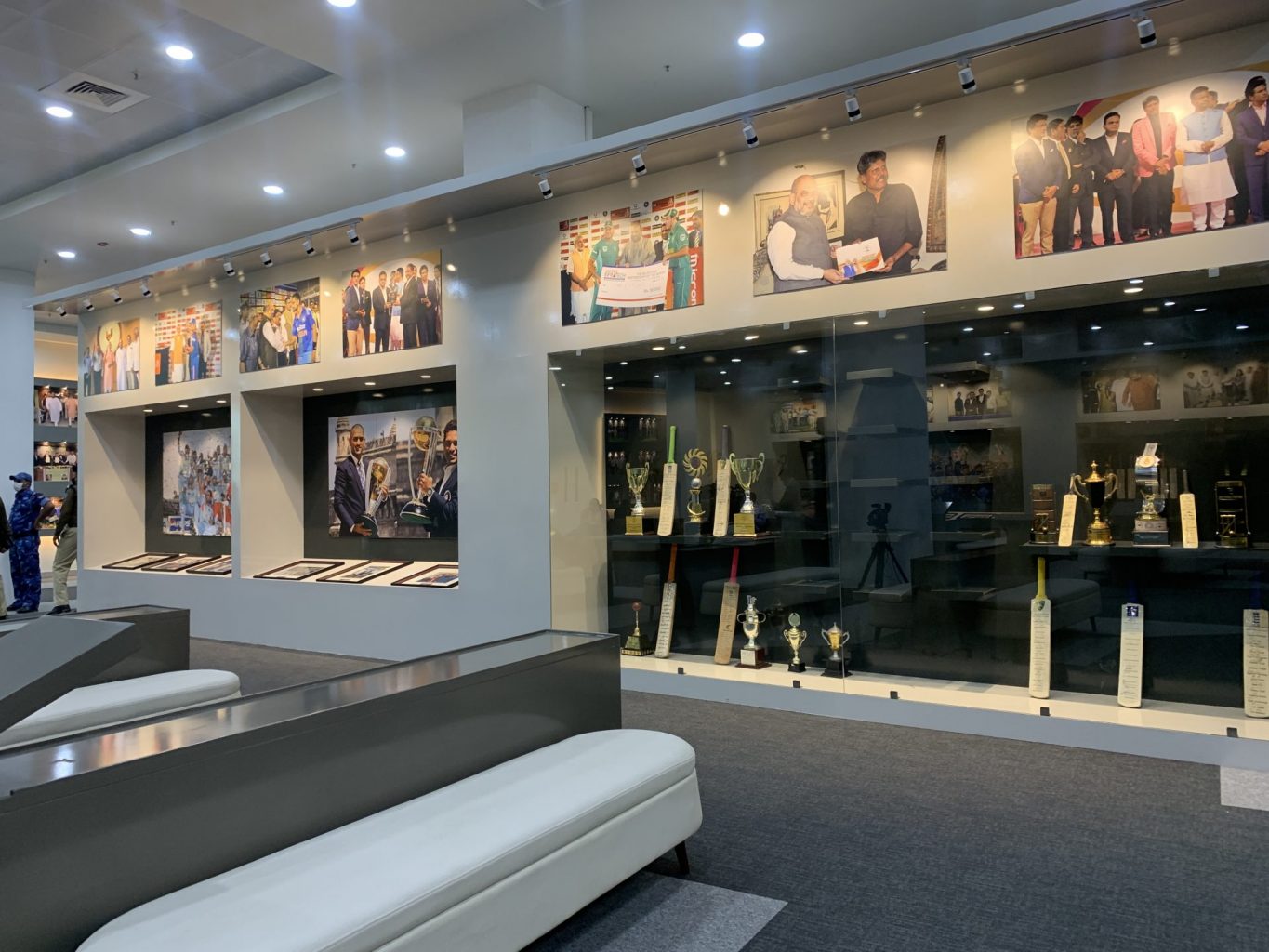 To make the stadium experience even more mesmerizing, the Gujarat Cricket Association has established a "Hall of fame" which features all the prominent cricketing memories and legends of the sport.

Motera has witnessed several milestones, from Sunil Gavaskar becoming the first batsman to score 10,000 runs in Test cricket to India ending Australia's World Cup-winning streak in 2011 in a thriller quarterfinal.

Life-size illuminated posters of some of the most significant wins in Indian cricket are bound to give you goosebumps as you stroll around this awe-inspiring hall. A single illuminated strip features images of India's biggest cricketing legends, including the likes of Kapil Dev and Sunil Gavaskar. The "Hall of fame" zone is also home to a rare collection of vintage images of the cricket legends of the 70s. Other cricket memorabilia, including autographed bats of teams of iconic victories, have also been displayed. As we made our way and moved further into the stadium, we found ourselves inside the stunning "Presidential Suite." A wall featuring the stadium pioneers explains how this dream project of PM Narendra Modi came into being. 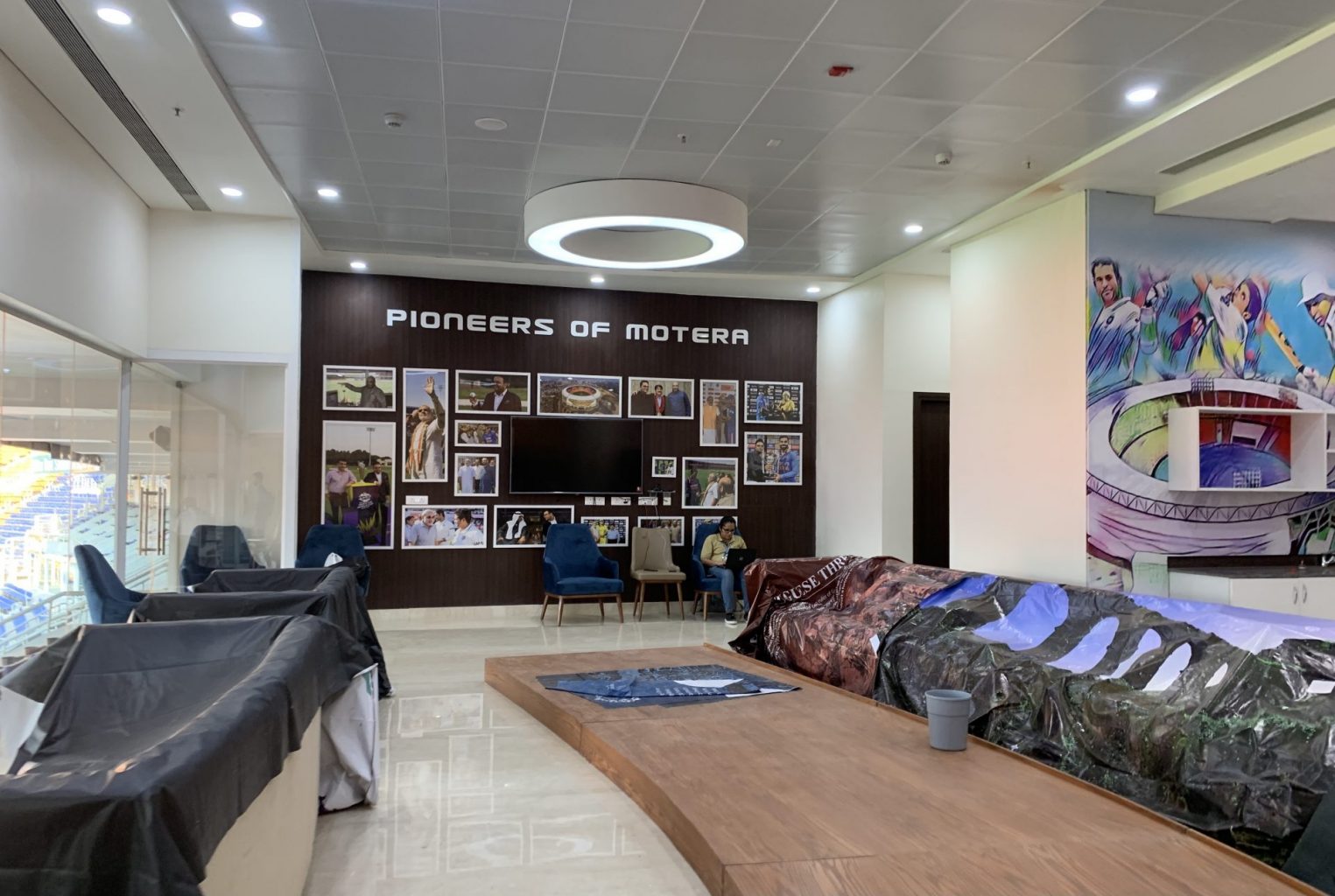 Australian architect firm Populous, famous for designing the Melbourne Cricket Ground, was hired to turn the PM's dream into reality. Besides the grand interiors of this Presidential suite built, the suite also boasts of a breathtaking ground view. The oval-shaped ground ensures that the boundary's size remains the same irrespective of the pitch and that every fan gets the best view possible regardless of the ticket pricing. With the 360-degree podium concourse, you can catch all the action without any pillars, seated anywhere in the stadium. It also allows a seamless movement of the crowd depicting the degree of planning that has gone into building this facility. With 76 corporate boxes - the most extensive corporate seating available globally, the stadium adds another feather to its cap. After an almost overwhelming and physically demanding tour of the 63 acres stadium, we reached our final destination - one of the largest press boxes in the entire world. We were greeted by an uninterrupted view of the spectacular Narendra Modi Stadium in all its glory, with over 40,000 fans cheering for Captain Kohli and his army. India's spinning wizardry made the 'Mighty Motera' experience even more magical for the fans as local lad Axar picked a six-wicket haul to put India into the driver's seat. The mightiness of the structure with its world-class facilities is a testament to the PM's vision of building a stadium that would put India on the global map. We hope that the stadium continues to be a quintessential milestone ground for cricket and the entire Indian sports ecosystem, helping ourselves and the world believe what India is capable of.

Also Read: Naming SAI centres after athletes – How does it help Indian sports?