The 2020-21 Indian Super League (ISL) season will reach its halfway stage as soon as tonight’s match between ATK Mohun Bagan and Mumbai City FC gets over. All the teams would have played 10 matches each by then and as things stand, things are pretty tight at both ends of the points table.

While the two aforementioned teams will continue to hog the top two places no matter what happens tonight, things are a little less straight-forward just below. Just five points separate third placed Hyderabad FC from SC East Bengal in 9th. FC Goa are fourth, just behind the Nizams on goal difference (both on 15 pts) while the next four positions are taken up by Jamshedpur (13 pts), Bengaluru (12 pts), NorthEast United and Chennaiyin (both on 11 pts).

Based on current form, this area of the table might look a lot different after the next few games. Chennaiyin and Bengaluru FC are both struggling to win matches and are sliding deeper down the table with every passing game. The Marina Machans will find it all the more difficult to turn a corner as they are set to face SC East Bengal, ATK Mohun Bagan and Mumbai City soon. NorthEast, after a bright start, have hit a roadblock as well. They have lost three of their last four and are up against the Blues next. A positive result in this game might give one team the impetus to turn their season around. 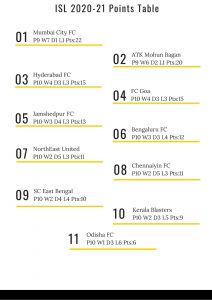 Jamshedpur take on FC Goa and Hyderabad FC, both top 4 sides at present, in two of their next three which will also have a bearing on each of those teams’ standings. Further down the table, SC East Bengal have emerged as dark horses all of a sudden and look way more competitive than what they did in the first seven games. They square off against Kerala Blasters, Chennaiyin FC, Mumbai City and FC Goa in their next four games. It’s a tricky mixture of teams considering what the first two have to lose and the last two have to gain out of those matches.

The bottom of the ISL table sees Kerala Blasters and Odisha FC with 9 and 6 points respectively. While Kerala’s victory against Jamshedpur FC last night will give them confidence, Kibu Vicuna’s side are yet to show any kind of consistency this season. They lock horns with East Bengal, Bengaluru FC and FC Goa next, teams which will test their resolve and have their own ambitions on the line.

Consistency has been an issue for the Kalinga Warriors too, although they do have a win in their pocket now and looked better defensively in the goalless draw against Chennaiyin yesterday. However, they still have matches to play against the likes of Goa, Hyderabad, Mumbai City and ATK Mohun Bagan which means this resurgence will be tough to maintain.

Nevertheless, both the bottom teams are still in contention for the playoff spots, at least mathematically. They would be looking to follow East Bengal’s example and try to get some assistance from the transfer market to mount a comeback of sorts in the second half of the ISL season.