How Coimbatore became the motorsports capital of India

Motorsport has gained major popularity in India in over the last decade and generated interest across the country. India's role in the global motorsport arena has never been bigger with the growing participation in international rally and road racing events. Indian auto manufacturers are also investing in this sport and are already seeing returns with strong finishes in international events. However, the foundation stone of motorsport in India was laid well before World War II broke out.

Coimbatore, the city in Tamil Nadu known as the Manchester of South India for its extensive textile industry, fed by the surrounding cotton fields can also be called the Motorsports capital of the country. The city is still the pit-stop for every national level racing tournament. The thriving motorsport culture has a lot to do with the extremely well-maintained Kari Motor Speedway (KMS). Inaugurated in 2003, KMS is 2.1-km purpose-built race track situated in the outskirts of Coimbatore. It regularly conducts the National Championship races for go-karts, Motorcycle road racing and formula (car) racing events. The track is also approved by CIK-FIA (Commission Internationale De Karting), the governing body of World Motor Sport to hold races up to Formula 3 category.

Coimbatore is an engineering hub by providing components and testing facilities for various automotive companies helps the cause of motorsports in the region. Its tryst with racing started back in the 1950s when the Standard 10s, Studebakers, Fiat Millicentos would line up to compete against top-end Jaguar XK120. During those days, Sulur Air Force base used to host racing events which were hosted in a grand-scale carnival shape and the competitions were of the highest quality. The year 1954 saw the formation of the Coimbatore Auto Sports Club (CASC). The city's motorsport revolution was started by industrialists who were textile heirs of their textile entrepreneurs, particularly by a man called Sundaram Karivardhan, popularly known as Kari. A racing driver, car designer and business executive is widely considered as the father of Indian motorsport. He blazed the trail during the 1970s, 80s and the early 1990s until his untimely death in 1995. His unadulterated passion for the sport and vast contribution paved way for the future generations of Indian race car drivers like Narain Karthikeyan, Karun Chandhok, and Armaan Ebrahim. They all took their first steps with the introduction of the Formula Maruti class in 1988. It was Kari's creation of the Formula Maruti in 1987 that really ignited the field of motorsports in India like never before.

Kari, who was the managing director of Coimbatore-based Lakshmi Mills, was instrumental in putting forth the Formula Maruti open-wheeled race vehicle. Be it single-seaters or two-seaters, Kari designed and tested them. The KMS track earlier served as a runway for microlight aircraft and the circuit is rectangular in shape. The presence of industries which manufacture auto parts in Coimbatore was another key factor that helped in Coimbatore becoming a motorsport destination. 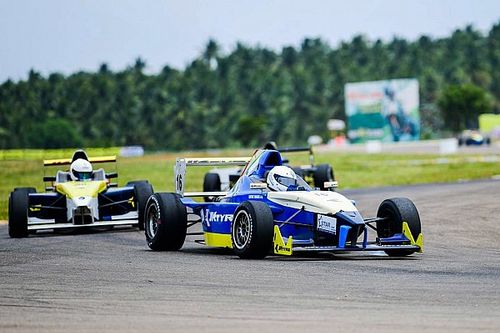 About 30% of the automotive components needed for Maruti and Tata Motors arrive from Coimbatore. The industries in Coimbatore cater to each requirement in the automobile industry be it two-wheelers or four-wheelers. Coimbatore has regularly produced racers of the calibre of Kari, Vijay Prakash, Vijayakumar, Narain, Sanjay Balu, Arjun Balu and Leelakrishnan among others. Fast, reliable, and affordable, the Formula Maruti opened the floodgates for others with motorsport racing in their veins including J. Anand, Akbar Ebrahim and R. Gopinath. All these drivers would go on to become national champions in Formula 3. Akbar Ibrahim won the inaugural race.

In 1983, Kari also started Super Speeds, an automobile racing team. For seven years between 1988 and 1995 the team also entered Formula 3 for the annual Madras Grand Prix races. Towards the end of his life, Super Speeds entered into an agreement with JK Tyres to establish their rally team and also provide technical assistance. Following his untimely death, the company was sold to LGB, and today it stands out as a race car construction firm.

Besides track racing, rally car driving was also a source of real interest among motorsport enthusiasts in the country, and yet again Kari made his mark here.

Remembering Kari (S Karivaradhan) , my fellow architect in creating India's 1st 'production' single seaters back in 1989 - the 32 Formula Maruti cars @maruti_corp . Tragically passed away in an aircrash in 1995 , deeply missed by our entire family pic.twitter.com/dTxUcI4ZZQ

India has a lot of potential as a region for motorsports. It is a man-machine game that requires strong financial support; this makes it difficult for aspiring riders to pursue it professionally. And thus, to make this sport accessible for all, the key aspects are – cultivating the right talent at the right time, providing the necessary facilities and infrastructure, and an enabling platform for these young riders to scale up for global competitiveness.